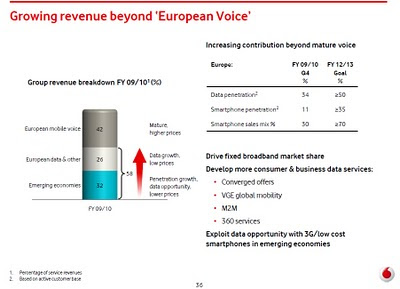 Vodafone said its organic group service revenue fell 0.2% in the quarter ending March 31 to 11.16 billion pounds (16.12 billion US dollars), as a revenue fall of 1.7% in (western) Europe offset rises in Africa, central Europe, Asia-Pacific and the Middle East.

In the year to March 31, Vodafone said its organic revenue fell 2.3% to 44.47 billion pounds, but the multinational operator said it expects to return to a "low level of organic revenue growth during the year" ending March 31, 2011 and that capital expenditure will be similar to the 6.2 billion pounds it spent in the previous fiscal year.

Vodafone forecast that data traffic on its (western) European networks will grow 70% to 140 petabytes in the year to March 31, 2011, following a 100% increase in the previous year. It added that laptops account for 85% of the volume and that "the mix is now shifting to smartphones."  Vodafone also said that 7% of its cell sites have utilisation rates of more than 90% in the buisest hour of the day. source: Vodafone presentation