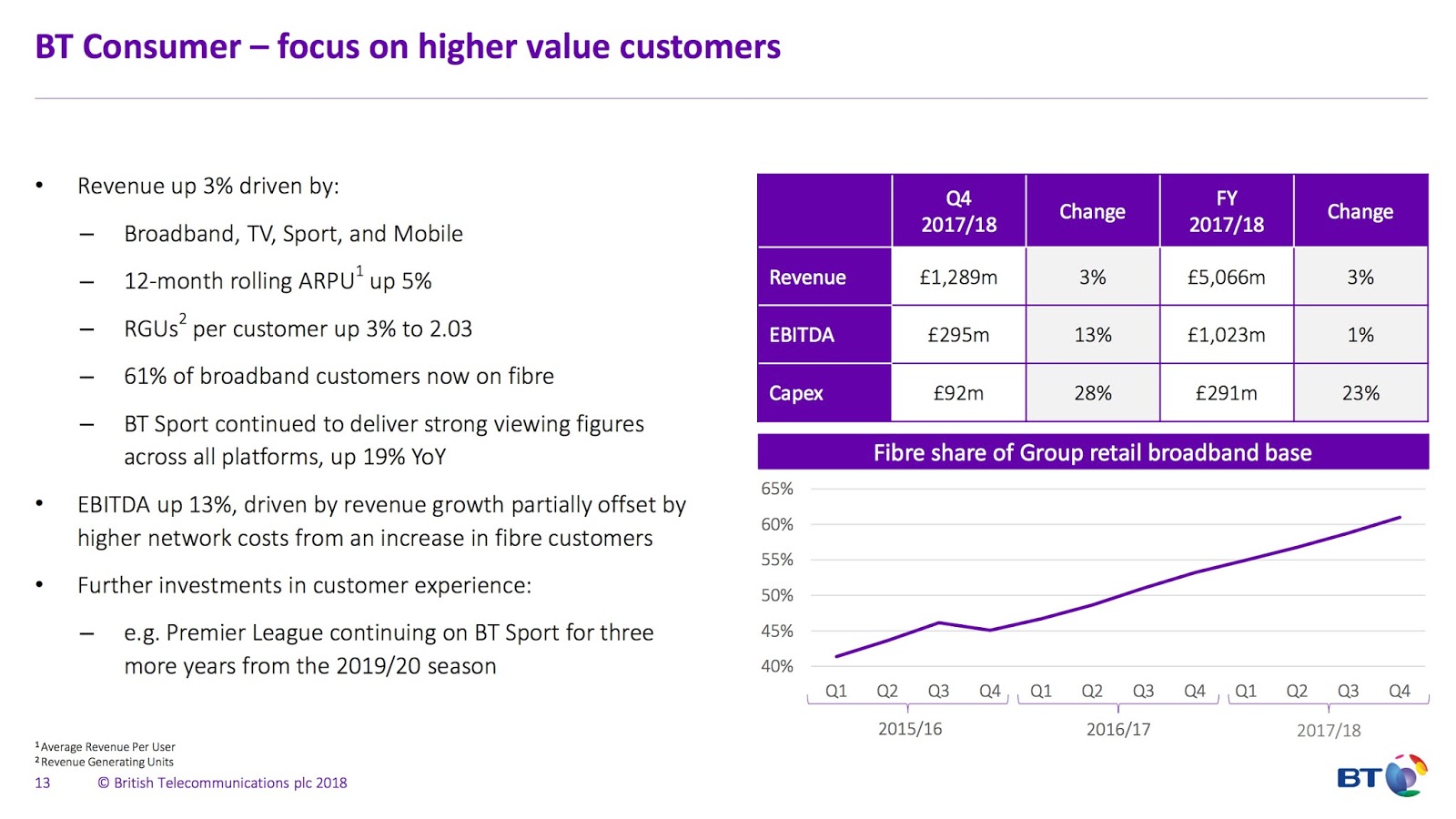 The London-based company said the 3% growth in its consumer businesses was more than offset by decline in its enterprise divisions. "The main contributor to enterprise revenue decline was Global Services whose reported revenue declined 9% due to ongoing challenging market conditions and a reduction in IP Exchange volumes and equipment sales in line with our strategy to reduce low margin business."

Yet BT plans to increase capital expenditure from 3.5 billion British pounds in the past financial year to 3.7 billion pounds in this year. source: BT statement 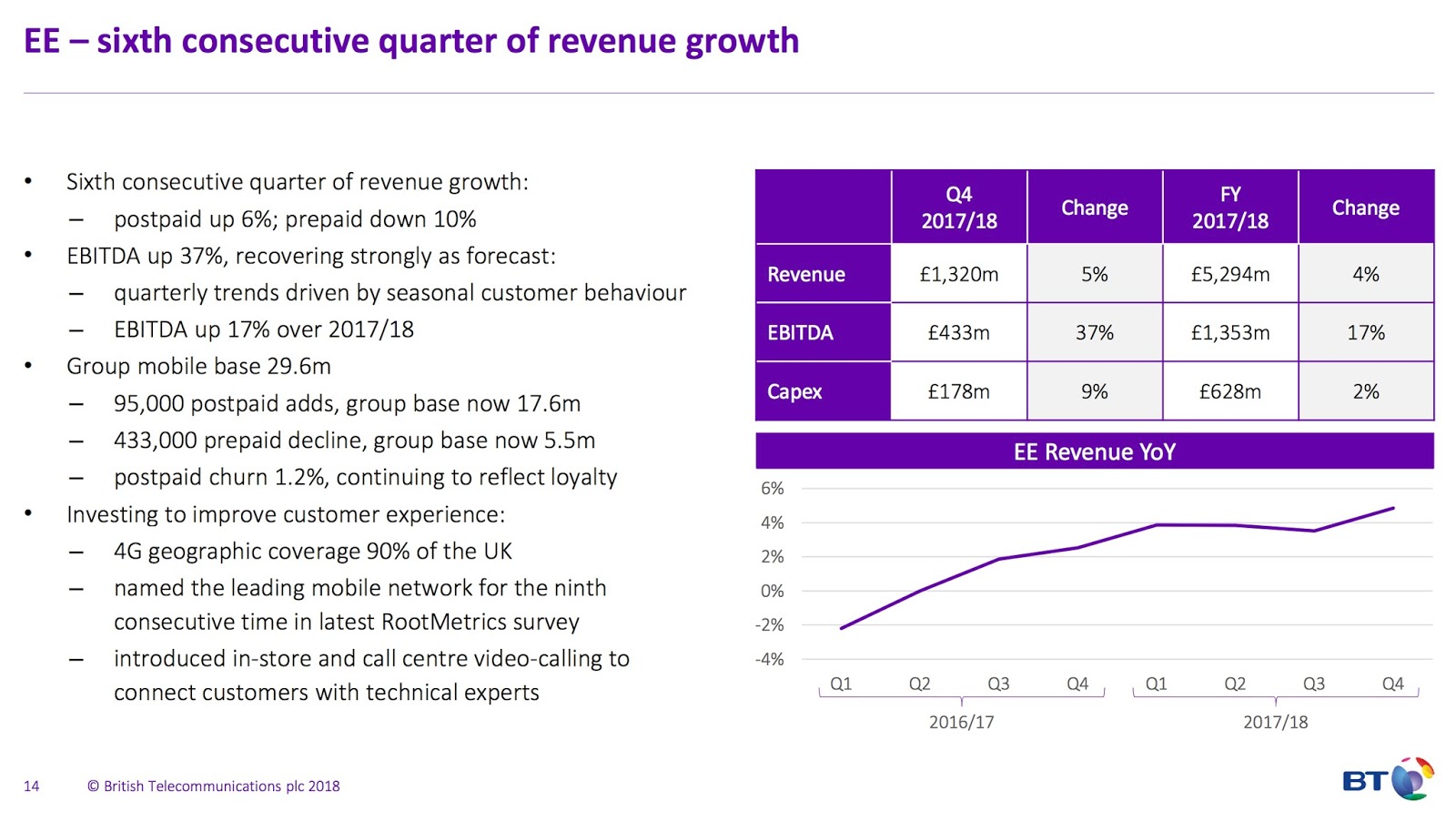 Apple forecast its revenue in the current quarter will reach between 51.5 billion and 53.5 billion US dollars, which would represent a year-on-year increase of between 12% and 18%.

For the quarter ending March 31, revenue rose 16% to 61.1 billion dollars, fuelled primarily by a 14% rise in iPhone revenues, even though shipments rose just 3%. Some of the difference is due to the high price of the latest model, the iPhone X, and Apple may also have benefitted from exchange rate movements.

Tim Cook, Apple’s CEO, said. “Customers chose iPhone X more than any other iPhone each week in the March quarter, just as they did following its launch in the December quarter. We also grew revenue in all of our geographic segments, with over 20% growth in Greater China and Japan.” Service revenue, which includes revenue from digital content and services, AppleCare, Apple Pay and licensing, rose 31% to 9.2 billion dollars. source: Apple statement

Amazon forecast net sales will grow between 34% and 42% year-on-year in the current quarter to between 51 billion and 54 billion US dollars, boosted by a favourable impact of approximately 1.2 billion dollars or 320 basis points from foreign exchange rates.

In the first quarter of 2018, Amazon increased sales 39% year-on-year on an constant currency basis to 51 billion dollars in the first quarter. Amazon Web Services (AWS), the cloud computing business, generated a 49% increase in sales on a reported basis.

In a letter to shareholders, CEO Jeff Bezos revealed Amazon Prime now has more than 100 million paid members globally, 13 years after it was first launched. "In 2017 Amazon shipped more than five billion items with Prime worldwide, and more new members joined Prime than in any previous year – both worldwide and in the U.S.," he added. "Tens of thousands of customers are also using a broad range of AWS machine learning services, with active users increasing more than 250% in the last year, spurred by the broad adoption of Amazon SageMaker."

Bezos also said there are now more than 30,000 skills for Alexa (Amazon's voice controlled personal assistant) from outside developers, which can control more than 4,000 smart home devices from 1,200 brands. He added that Amazon has improved Alexa’s spoken language understanding by more than 25% over the past 12 months through "enhancements in Alexa’s machine learning components and the use of semi-supervised learning techniques. (These semi-supervised learning techniques reduced the amount of labeled data needed to achieve the same accuracy improvement by 40 times)."

China Mobile recorded a 1% year-on-year increase in revenues for the first quarter of 2018, fuelled by a 3.6% increase in service revenues to 166.7 billion Chinese yuan (26.3 billion US dollars). The number of wireline broadband customers leapt 45% year-on-year to 124 million, while 4G connections climbed 18% to 672 million. source: China Mobile operating data
No comments: