Bharti Airtel reported a 7% year-on-year rise in revenues on a comparable basis for the quarter ending September 30th to 211.3 billion Indian rupees (almost 3 billion US dollars). Its customer base declined 8% to 411 million, due to a 13% fall in India where Airtel is seeing intense competition. Still, revenues in India were up 3% to 153.6 billion rupees, while sales in Africa rose 13% to 853 million U.S. dollars.

In Africa, Airtel said the total customer base using the Airtel Money platform increased by almost 20% to 15.5 million. The total value of transactions on the Airtel money platform rose 35% year-on-year to 7.98 billion dollars in the quarter. Airtel Money revenue for the quarter was 79.3 million dollars, up 51%. Source: Airtel statement
No comments:

Vodafone said it is now Europe’s largest owner of "gigabit-capable next generation network (NGN) infrastructure" following the closure of the Liberty Global acquisition, which added 17 million cable homes in Germany and central and eastern Europe to its footprint, increasing the number of homes connected by its NGN network in Europe to 54 million.

Vodafone is upgrading its cable infrastructure using DOCSIS 3.1 technology, and aims to market gigabit broadband speeds to around 50 million households in its cable and FTTH (fibre) footprint by March 2023, compared to 24 million today. It has also launched 5G in seven European markets, with services available in 58 cities with "observed speeds of up to 1Gbps." source: Vodafone statement

Deutsche Telekom reported a  1.7% year-on-year increase in revenue in organic terms for the third quarter to 20 billion euros. The growth was again fuelled by the U.S. division, which lifted revenues by 3.6% in dollar terms. In Germany, revenues rose 0.6% driven primarily by growth in mobile services and rising demand for fast fixed-line broadband.  The group also said its smart home subscriptions rose 25% to 411,000, while subs for its StreamOn proposition (its zero-rated video streaming package for mobile users) climbed 79% to 2.8 million and Magenta TV subs rose 8% to 3.5 million.  Source: DT presentation 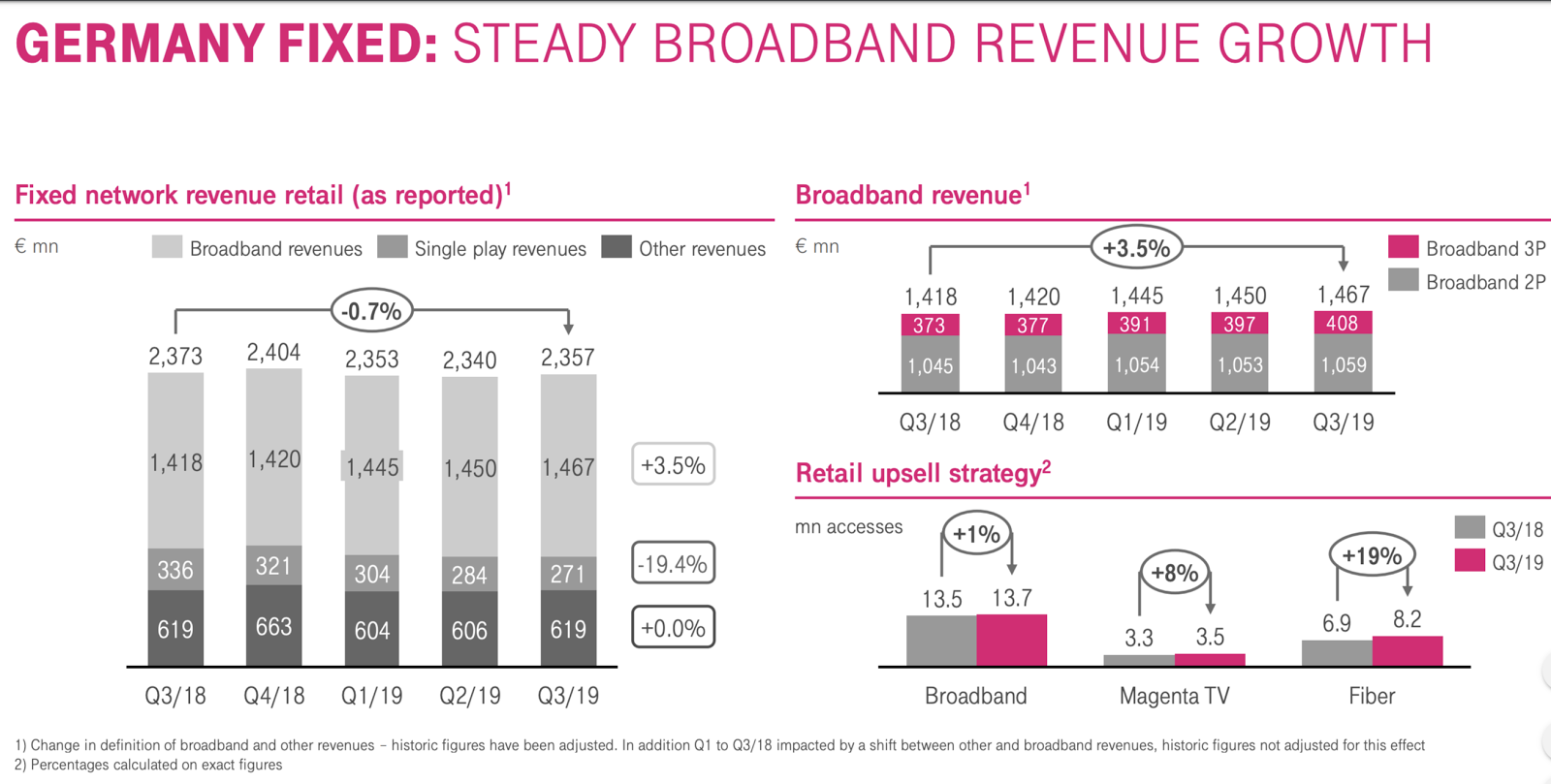 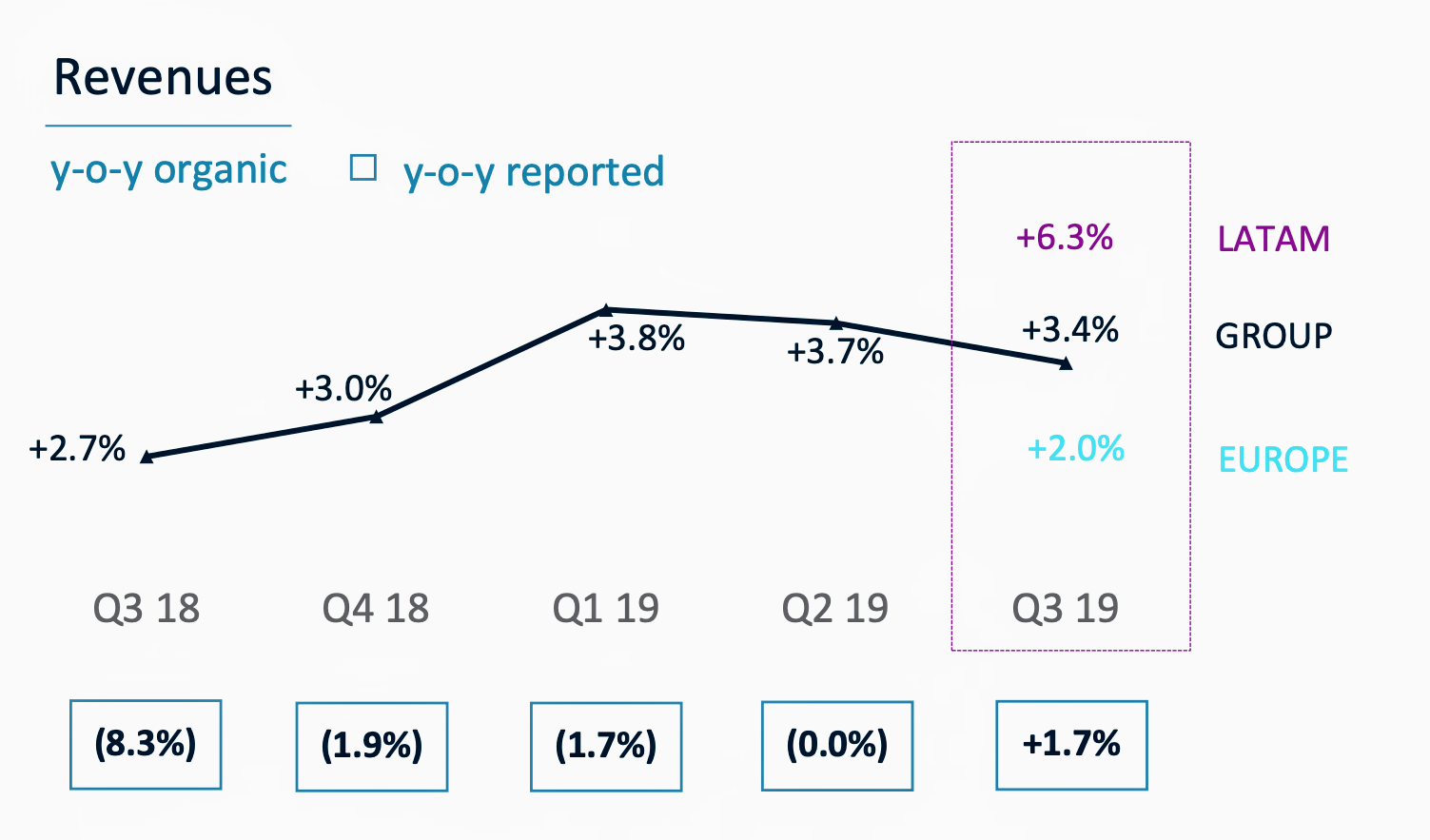 Telefónica reported a 3.4% year-on-year increase in revenues for the third quarter on an organic basis to 11.9 billion euros, propelled by growth in the UK and Latin America.

The group said: "Investment in fibre is key for Telefónica and will allow the generation of revenues and efficiencies with the capture of savings due to the dismantling of copper networks. The technological evolution of the fibre throughout its useful life of more than 30 years, will allow offering up to 10 Gbps symmetrical and optimise the deployment of 5G. In parallel, the new access network “Open Access” will support increasingly flexible and virtually controlled services." source: Telefónica statement.
No comments: 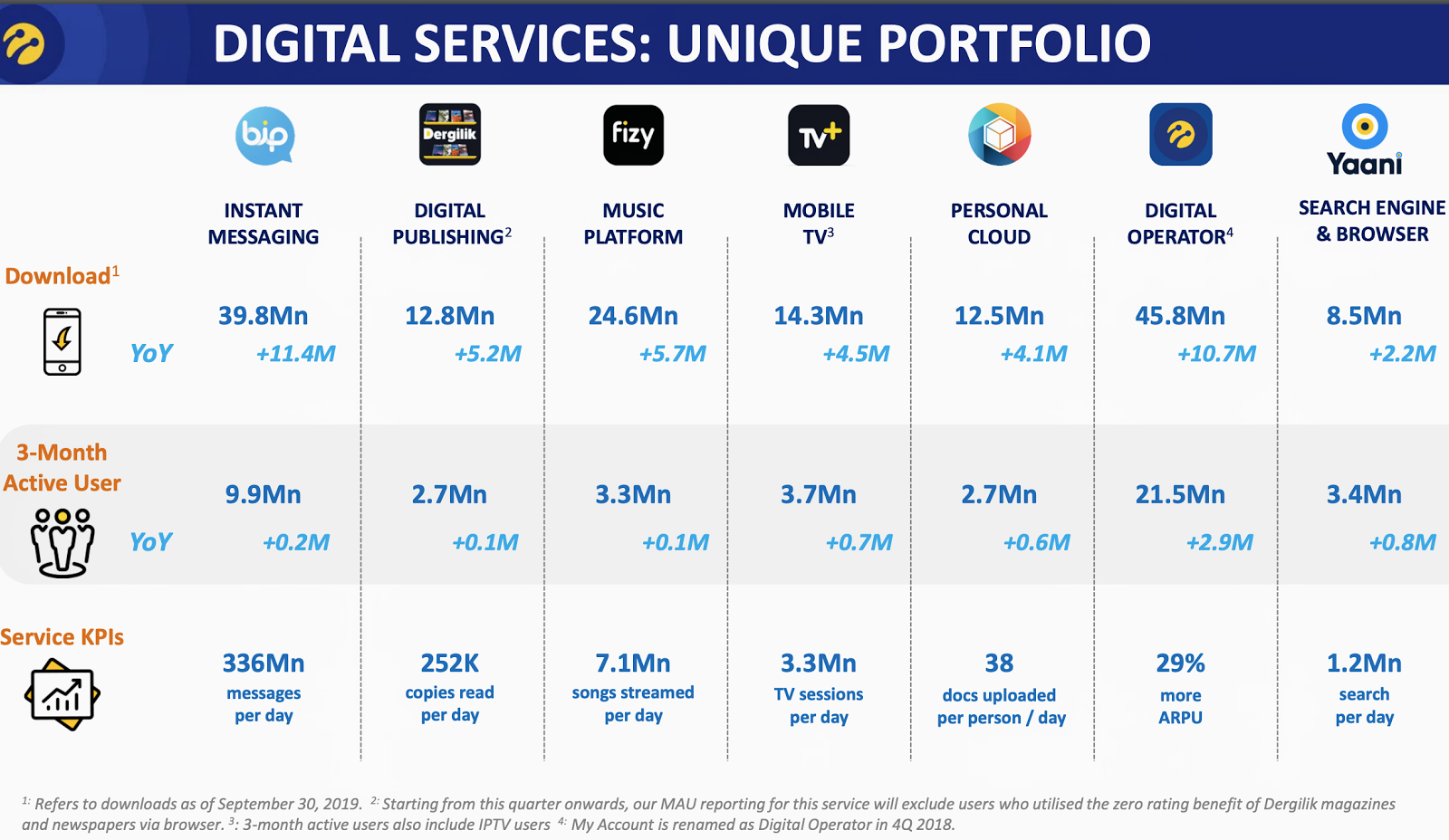 Turkcell reported a 14% year-on-year rise in revenues for the third quarter to 6.6 billion Turkish lira (1.16 billion US dollars). Source: Turkcell presentation
No comments: