NTT DOCOMO unveiled three new smartphones and two new tablets compatible with its LTE mobile service, for launch in or after September. The Tokyo-based operator said all models are capable of a maximum downlink speed of 75 Mbps and run the Android 4.0 operating system. It added that three of the five models are compatible with "the NOTTV V-high multimedia broadcasting service, including the first NOTTV-compatible GALAXY tablet."

On August 20th, DOCOMO announced that it had more than five million LTE subscribers. The service was launched at the end of 2010. source: DOCOMO statements 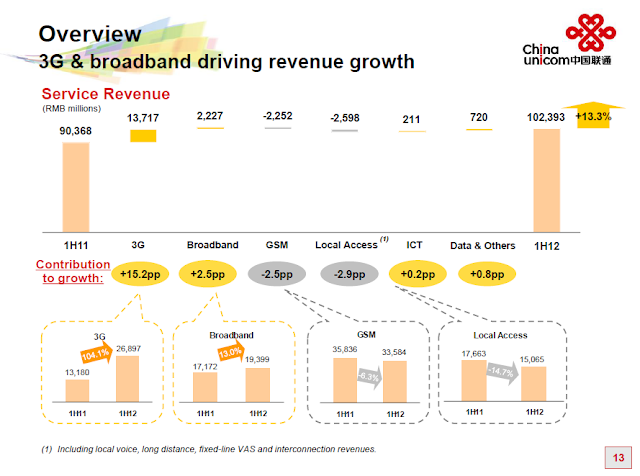 China Unicom said that its operating revenues rose 20% year-on-year in the first half of 2012 to 121.69 billion Chinese yuan (19.14 billion US dollars). Service revenues rose 13.3% fueled by a 23.4% lift in mobile revenues. Unicom claimed to have gained 1.6 percentage points of market share over the 12 months to June 30th, giving it 23.1% of the Chinese telecoms market.

Unicom attributed most of the growth to a sharp rise in 3G service revenues, as its 3G subscriptions rose 140% year on year to more than 57.5 million. source: China Unicom presentation
No comments:

Selling both the iPhone and low cost smartphones (about 1,000 yuan or 155 dollars), the company said: "In the first half of the year, mobile data revenue was 19.27 billion yuan, representing an increase of 46.7% over the same period last year. Mobile data revenue accounted for 45.3% of the mobile service revenue, which is at an industry-leading level." source: China Telecom statement
No comments:

China Mobile Moves Down a Gear 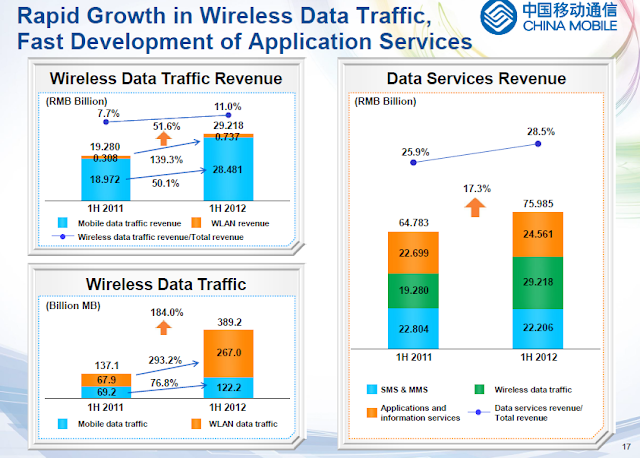 The operator said that voice usage was up 9.2% and wireless data traffic climbed 51.6% as 3G customers reached 67 million, up from 35 million a year earlier. source: China Mobile presentation
No comments: 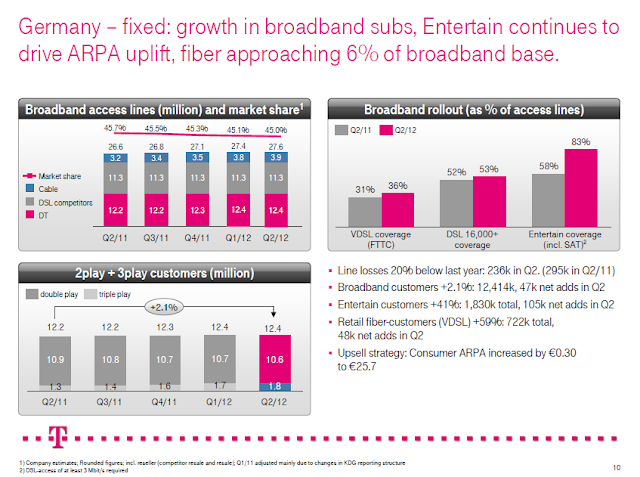 Deutsche Telekom reported a revenue decline of 3% year-on-year on an organic basis to 14.38 billion euros in the second quarter of 2012. In Germany, revenues fell 3.1% and in the U.S., service revenues declined 6.1%.