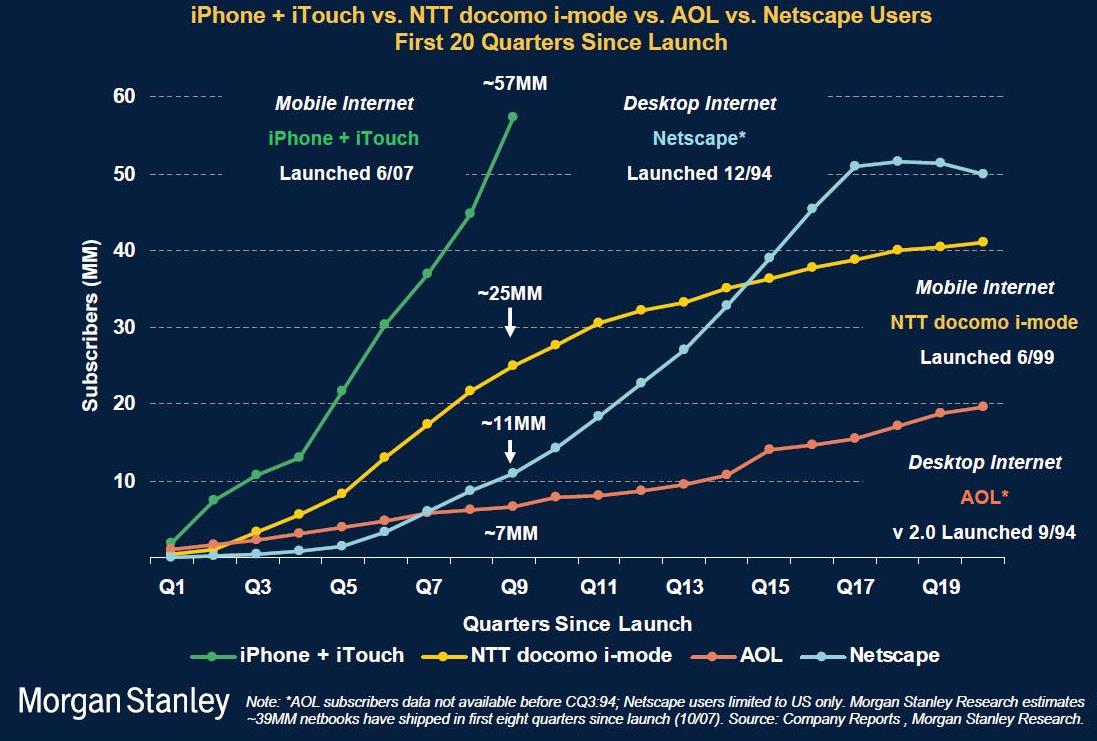 Palm Shipments Up, Sell-through Down

Palm said it shipped 783,000 smartphone units during the quarter ending November 27, 2009, representing a 5% decrease on the previous quarter and a 41% increase compared to the same period a year earlier. It said that smartphone sell-through for the quarter ending November 27 was 573,000 units, down 29% from the previous quarter and down 4% year-over-year. source: Palm statement
No comments:

Research In Motion, maker of the BlackBerry, said that revenue in the quarter ending November 28, 2009 rose 41% year-on-year to 3.92 billion US dollars as it shipped approximately 10.1 million devices, up from 6.7 million in the same period of 2008.

RIM forecast that revenue for the quarter ending February 27, 2010 will be between 4.2 billion and 4.4 billion US dollars, which would be up about 24% on the same period a year earlier. source: RIM statement
No comments:

The number of downloads from Nokia's Ovi applications store is growing 100% each month and has now reached one million a day, according to an article in The Financial Times. The article said the store now has 80 million active users, up fron 54 million in August.

"We have screens up in our offices running the Twitter feeds all day long. It's like sitting there and getting punched in the face. But when we make improvements we see the impact instantly," George Linardos, head of products at Nokia's media group, told the FT, referring to criticism of Ovi. source: Financial Times
No comments:

America Movil, Latin America's biggest mobile operator, could invest around 850 million US dollars in its Mexican operations during 2010 - the same as in 2009, according to remarks made by Chief Executive Daniel Hajj during a press conference. source: Total Telecom/Dow Jones
No comments:

Total revenues for mobile operators in the 30 OECD countries are forecast to decline to 408 billion euros in 2009 from 411 billion euros in 2008, according to Wireless Intelligence. Capital expenditure accounted for 10% of operator revenues in the third-quarter of 2009, compared to about 14% a year earlier, the research firm added. source: Wireless Intelligence statement
No comments:

"100 million users worldwide have downloaded Gameloft games to Samsung handsets, in the next few years I would expect to see 10 times that," Michel Guillemot, president and CEO of Gameloft, told a Samsung press conference in London on Tuesday, according to Dow Jones Newswires. source: Total Telecom/Dow Jones
No comments:

Qtel expects to meet its target of between 9% and 11% profit growth this year as it eyes acquisitions and licenses in the Middle East and Asia, the company's chief executive told Zawya Dow Jones Monday. The Doha-based company has spent most of the 6.5 billion to 7.3 billion Qatar rials (1.79 billion to 2 billion US dollars) earmarked for capital expenditure in 2009 mainly in Qatar, Iraq, Algeria and Palestine, Nasser Marafih added. source: Total Telecom/Dow Jones
No comments:

This week, Nokia forecast that industry mobile device shipments will rise approximately 10% in 2010 and that its market share will be flat next year, compared to 2009. Nokia also said it expects a flat market in euro terms for the mobile and fixed infrastructure and related services market in 2010, compared to 2009. Nokia added that it continues to target services net sales of at least 2 billion euros in 2011 and 300 million active users for its services by the end of 2011.

Nokia also said that its operational priorities for 2010 include re-engineering its Symbian user interface, delivering a major product milestone before mid-year 2010 and another major product milestone before the end of 2010. The Espoo-based handset maker also said it plans to deliver its first Maemo 6-powered mobile computer, with an iconic user experience, in the second half of 2010, while significantly increasing the proportion of touch and/or QWERTY devices in its smartphone portfolio. source: Nokia statement
No comments: