Amazon unveiled the Kindle Fire, a tablet computer with a seven inch multi-touch display, priced at 199 US dollars. The Kindle Fire, which is designed to provide "instant access" to Amazon's digital entertainment services, will ship with 8GB of memory, a 1024 x 600 pixel screen and a new web browser, which draws on Amazon's formidable Cloud services. 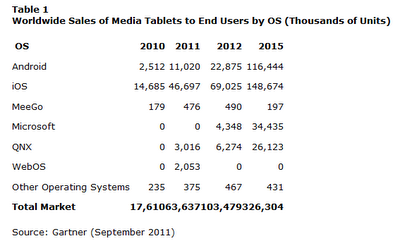 Apple’s iPad will account for 73.4% of worldwide media tablet sales in 2011, down from 83% share in 2010, according to reserach firm Gartner. “Apple had the foresight to create this market and in doing that planned for it as far as component supplies such as memory and screen," said Carolina Milanesi, research vice president at Gartner. "This allowed Apple to bring the iPad out at a very competitive price and no compromise in experience among the different models that offer storage and connectivity options.”

Research In Motion, maker of Blackberry, said its revenue fell 10% year-on-year to 4.2 US billion dollars in the quarter ended August 27, 2011.  RIM said it shipped approximately 10.6 million BlackBerry smartphones (compared with 12.1 million the previous year) and approximately 200,000 BlackBerry PlayBook tablets during the quarter.

“We successfully launched a range of BlackBerry 7 smartphones around the world during the latter part of the second quarter and we are seeing strong sell-through and customer interest for these new products. Overall unit shipments in the quarter were slightly below our forecast due to lower than expected demand
for older models,” said Jim Balsillie, Co-CEO at Research In Motion.source: RIM statement
No comments:

Micro-blogging service Twitter said that it now has 100 million active users around the world. It claims that half of these users log in each day and 40% of its user base just read their feed, rather than posting themselves. source: Twitter blog post
No comments:

Mobile Prices Down Sharply in Decade 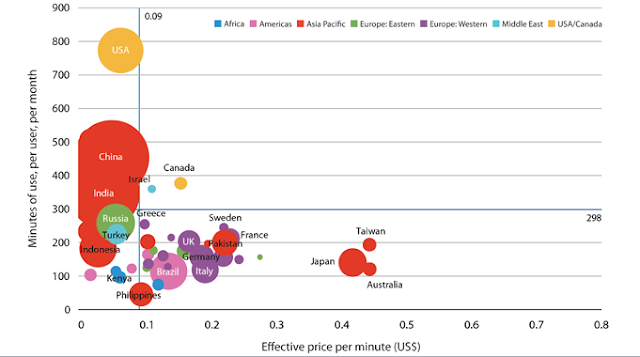 Total global mobile voice minutes increased tenfold between 2001 and 2010 to 1.6 trillion last year, according to Wireless Intelligence. The research firm, a unit of the GSMA, said that is equivalent to an increase from three to five hours of call time per user per month across the world, and has come about as a result of a simultaneous drop in the effective price per minute of calls to a quarter of what it was nine years previously.  source: Wireless Intelligence statement
No comments: