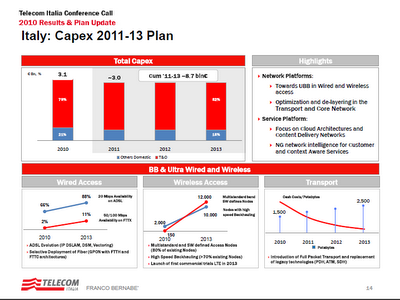 Franco Bernabè, CEO of Telecom Italia, said: "Today, thanks to greater competitiveness in the domestic market and the larger presence in Latin America – further consolidated through a 2.1% increase in Telecom Argentina’s economic interest – Telecom Italia is a more solid group, that can look to the future confidently."

In 2011, the Milan-based group said that it is aiming to keep revenues broadly stable and spend 4.8 billion euros on capex, compared with 4.58 billion euors in 2010. source: Telecom Italia statements
No comments:

Deutsche Telekom, Germany's largest telecoms company, said its revenue fell 1.6% year-on-year on a like-for-like basis to 15.48 billion euros in the fourth quarter of 2010. Revenues in the U.S. and Germany were broadly flat, while revenue elsewhere in Europe declined.

Deutsche Telekom said cash capex totaled 8.6 billion euros in 2010, down 7% on 2009. But the Bonn-based company also invested an additional 1.3 billion euros in new spectrum acquired in auctions in Germany. 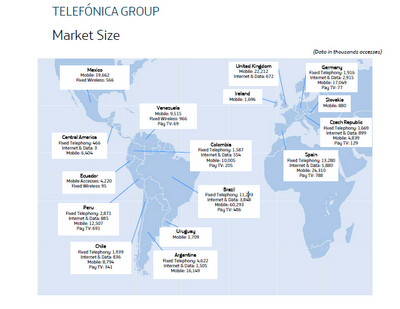 In 2010, Telefonica's revenue grew 2.4% on a like-for-like basis to 60.74 billion euros, lifted by 2.7% organic growth in Latin America and a 19.3% increase in mobile data revenues to 9.3 billion euros. source: Telefonica statement
No comments: 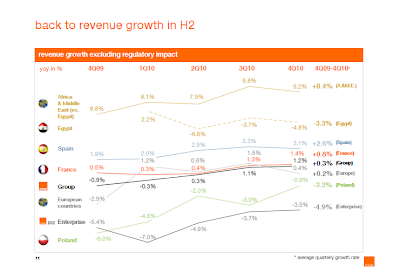 France Telecom said that its revenues fell 0.5% year-on-year on a like-for-like basis in the fourth quarter of 2010 to 11.73 billion euros. The Paris-based group said that, stripping out the impact of regulatory measures, its revenues would have risen 1.2%, driven by growth in Spain and its "rest of the world" division, which includes mobile operations in Africa and the Middle East.

France Telecom said it expects its revenues, excluding the impact of regulation, to increase slighlty on a like-for-like basis in 2011 compared to 2010. The group expects to spend 13% of its revenues on capex as it roll outs mobile broadband and optical fibre services in France, while extending its 2G and 3G mobile networks in Africa and the Middle East. In 2010, capex was 12.1% of revenues. source: France Telecom statement
No comments:

The world's largest handset maker also said it expects 2011 and 2012 to be transition years, as the company invests to build "the planned winning ecosystem with Microsoft."

Nokia added that it expects the mobile and fixed infrastructure and related services market to grow slightly in 2011 and that Nokia Siemens Networks' net sales to grow faster than the market.

Nokia also said that there are currently 200 million people worldwide using handsets running the Symbian operating system and that it expects to sell approximately 150 million more Symbian devices in the years to come. source: Nokia statements

"In return, Nokia gets a substantial reduction in its operating expenses; it gains a range of services to enrich its smartphone offering. There’s a new revenue stream for Nokia in the form of mobile advertising. It gets marketing support with a value of billions of dollars.

"The real point is that there’s a co-dependency between Nokia and Microsoft – both partners need the other to fully succeed. That’s part of what makes it the right choice." source: Nokia blog entry

In a speech at the Mobile World Congress, Stephen Elop, CEO of Nokia, said: "80% of the world's population today are in cell phone signal range, and yet only 20% of them are connected to the Internet." source: Mobile Business Briefing.
No comments: 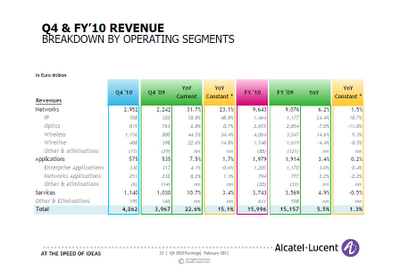 Alcatel-Lucent, one of the leading suppliers of telecoms networks, said that its revenues grew 15% year-on-year in constant currencies in the fourth quarter of 2010 to 4.86 billion euros. The rise was fuelled by a 34% increase in sales in its wireless division to 1.16 billion euros. source: Alcatel-Lucent presentation
No comments:

In the quarter, Sprint Nextel increased capital expenditure to 608 million dollars, from 554 million dollars a year earlier, to improve the coverage and capacity of its mobile broadband network. source: Sprint statement
No comments:

In the U.S., the group's Tracfone unit reported a 62.4% increase in fourth quarter revenues to 789 million dollars, with minutes-of-use tripling to 300 minutes per subscriber. Tracfone's total revenues for 2010 climbed 67.3% to 2.8 billion dollars. Tracfone added 1.1 million subscribers in the fourth quarter and 3.3 million in the year to finish December with 17.7 million clients. source: América Móvil statement.
No comments:

Vodafone Group, one of the world's largest mobile operators, said its service revenues grew 2.5% year-on-year on an organic basic to 10.96 billion British pounds (17.68 billion US dollars) in the quarter ending December 31. The growth was fuelled by a 27% increase in data revenue and a 9.3% rise in service revenues in developing countries. Vodafone said that service revenues grew 4.6% in its South Africa-based Vodacom subsidiary and 16.7% in its Indian unit

Vodafone said that group revenue would have grown 4.6% year-on-year, without downward changes in regulated mobile termination rates. The UK-based operator added that 17% of its customers in Europe (including Turkey) now have smartphones. source: Vodafone presentation
No comments:

Bharti said it had almost 128,000 base stations in 19 countries serving 208 million customers at the end of 2010. Its capital expendture in the quarter ending December 31 was 964 million dollars compared with 421 million dollars in the same quarter of 2009 (before it acquired the African operations). source: Bharti statement
No comments:

NTT DOCOMO, Japan's largest mobile operator, said that its operating revenues in the quarter ending December 31 were 1.071 trillion yen (13.07 billion US dollars), which amounts to a year-on-year decline of 2.3%.

The Toyko-based firm said: "As Japan's mobile phone market continues to mature in line with the cellular penetration rate, competition among operators is expected to remain intense in such areas as acquisition of subscribers and further improvement of service offerings.

"Under these market conditions, although an increase in the number of subscribers and an increase in packet communications revenues are expected, operating revenues for the fiscal year ending March 31, 2011 are estimated to be 4.209 trillion yen, a decrease of 75.4 billion yen (1.8%) from the prior fiscal year, primarily due to a decrease in voice revenues and equipment sales." source: DOCOMO statement
No comments: