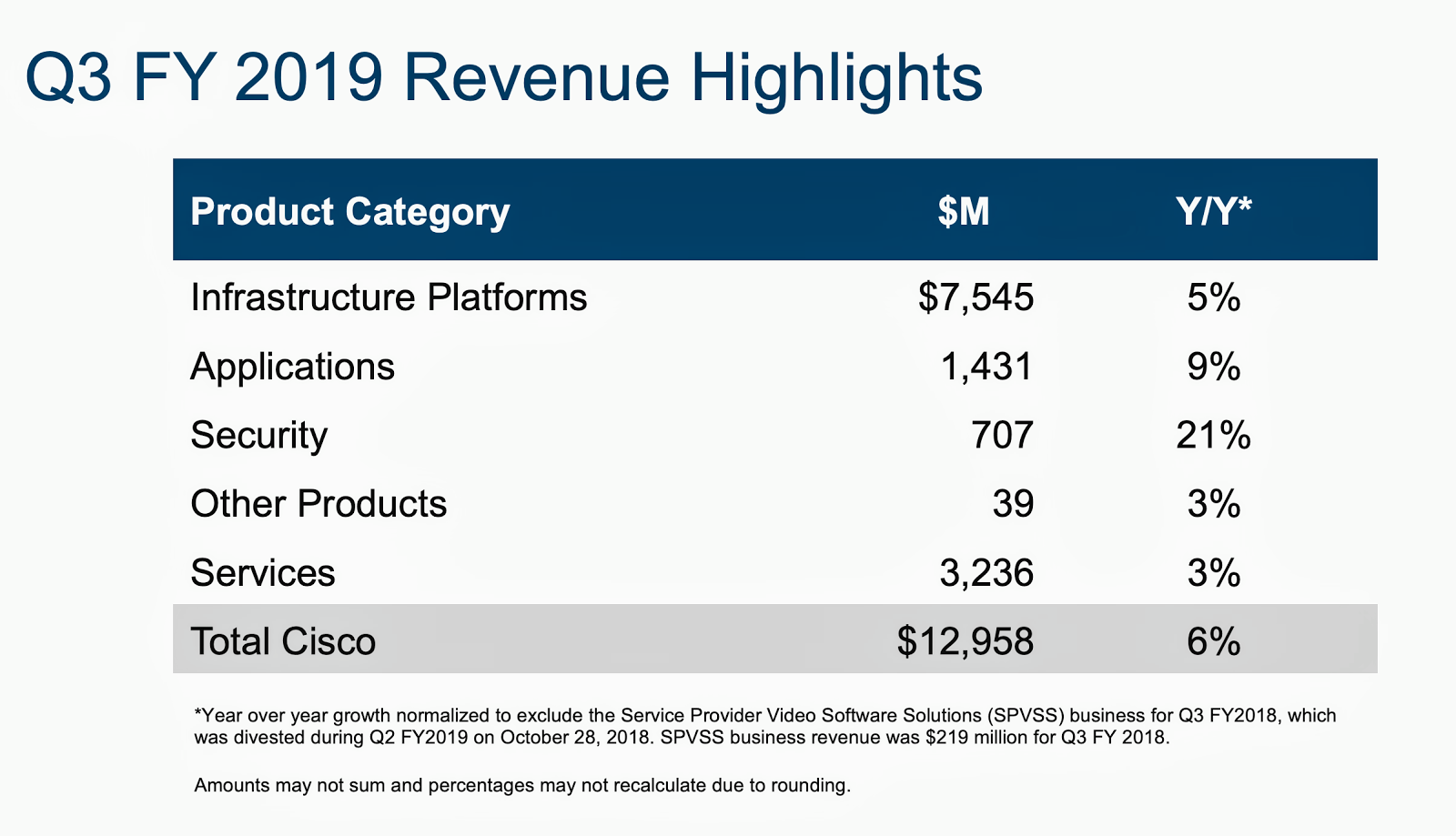 Cisco reported a 6% rise in revenues on a like-for-like basis to 13 billion US dollars for the quarter ending April 27, 2019.  It said that product revenue was up 7% and service revenue up 3%, while revenue in the Americas was up 9%, EMEA up 5%, and APJC (Asia Pacific, Japan and China) was down 4%. source: Cisco statement
No comments:

Vodafone reported a 0.6% year-on-year fall in organic service revenue (excluding handset financing and settlements in Germany) for the quarter ending March 31, as it struggled with "increased competition in Spain and Italy and headwinds in South Africa." Group revenues for the financial year ending March 31 were 43.7 billion euros.

Group CEO Nick Read said Vodafone intends "to build Europe’s largest 5G network, reaching over 50 cities by the end of [March 2020] following commercial launches during the summer. In addition to potential new revenue streams, 5G’s improved spectral and energy efficiency supports up to a 10x reduction in the cost per gigabyte, which will allow the group to limit future growth in network operating costs despite strong expected traffic growth."

Vodafone said it now has 37 million customers using its M-Pesa financial services suite, with over 10 billion euros of payments processed over the platform each month across seven African markets. In the year to March 31, M-Pesa grew revenues by 20.7% to 750 million euros, which represented 12% of the group's "emerging consumer" service revenues. "M-Pesa, our African payments platform, has moved beyond its origins as a money transfer service, and now provides enterprise payments, financial services and merchant payment services for mobile commerce," Nick Read noted. Source: Vodafone statement 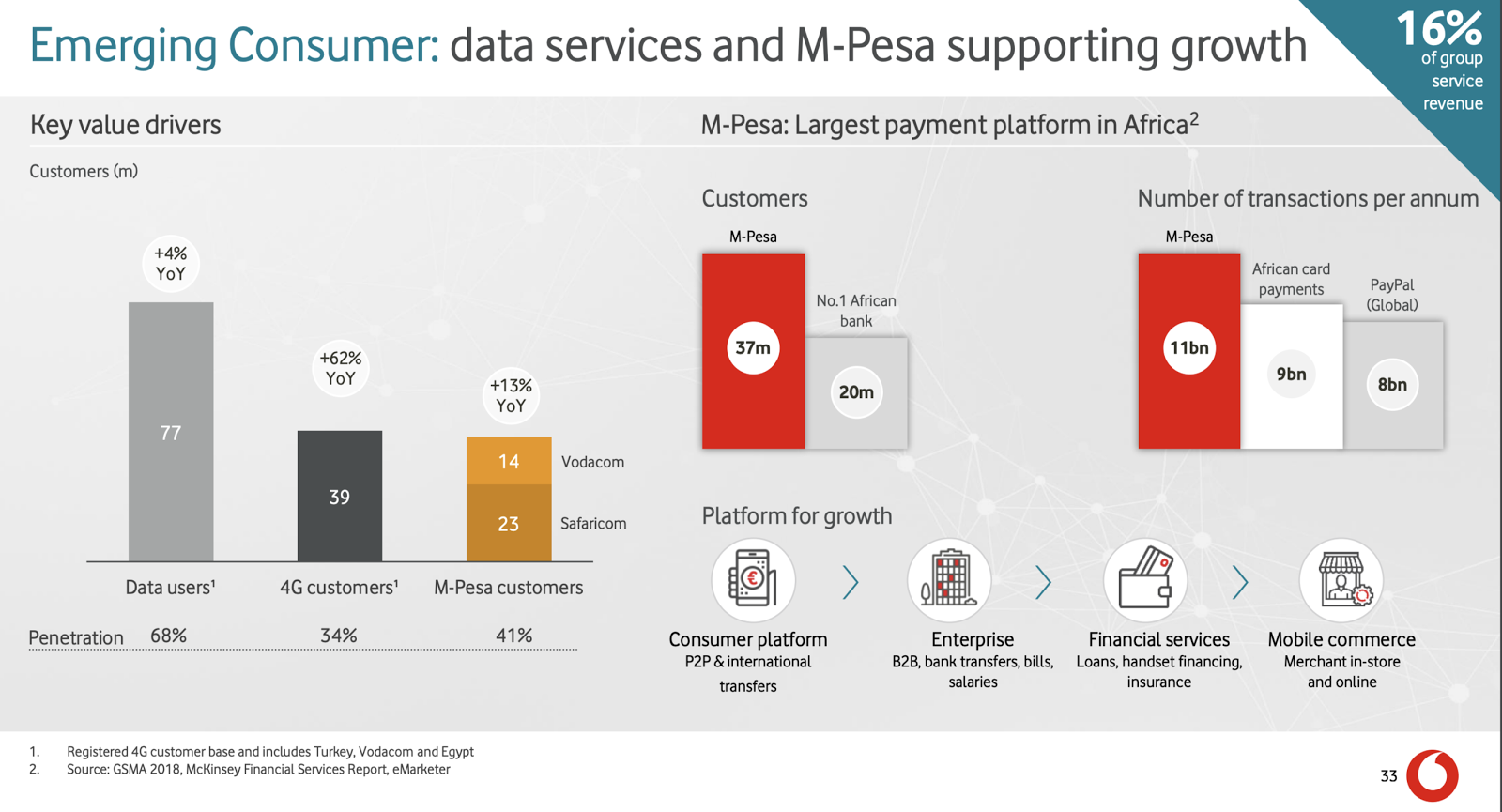 Deutsche Telekom reported a 3.5% rise in revenues on an organic basis to 19.5 billion euros for the first quarter of 2019. In the U.S., total revenue increased by 7% to 11.1 billion U.S. dollars, as T-Mobile USA continued to add new customers.

The group said that cash capex, excluding expenses for mobile spectrum, rose almost 20% to 3.7 billion euros. "This increase was attributable to the accelerated network build-out in the United States and further extensive investments to build out and modernise the network in Germany," it added.

DT said the number of customers in Germany with fiber-optic-based products increased by 688,000 in the quarter, reaching 12.9 million at the end of March, up 24% year-on-year. "Interest in these products rose tangibly with the launch of MagentaTV, the next development level in Deutsche Telekom’s IP TV offering," it added. DT said exclusive content helped it attract 66,000 new MagentaTV customers in the first quarter, taking the total number to 3.4 million, an increase of 7.1% compared with March 2018." source: Deutsche Telekom statement
No comments:

On a comparable basis, Orange reported a 0.1% fall in revenues to 10.2 billion euros for the first quarter. Although revenues rose 5% in the Middle East and Africa, the group was dragged down by a 1.8% fall in revenues in France, where it faced a "fierce promotional environment."

Fixed-mobile "convergence continues to be an engine for growth and loyalty for the group," noted  Stéphane Richard, CEO of the Orange Group. "We are the European leader in this field with over 10 million customers, representing nearly 40% of our consumer revenues for the continent."

Orange Money revenues climbed 29% in the first quarter of 2019 with the active customer base growing 20% year-on-year to15.5 million.   "This quarter marks a new milestone in our multi-services operator strategy," added Richard.  "In addition to our initiatives in mobile financial services in Africa and Europe, we have launched two new offers in France that will capitalise on our presence in the home: “Home protection” is a remote monitoring service that is already off to a very encouraging start, and “Connected home” brings together our ambitions for IoT in the home." source: Orange statement
No comments: