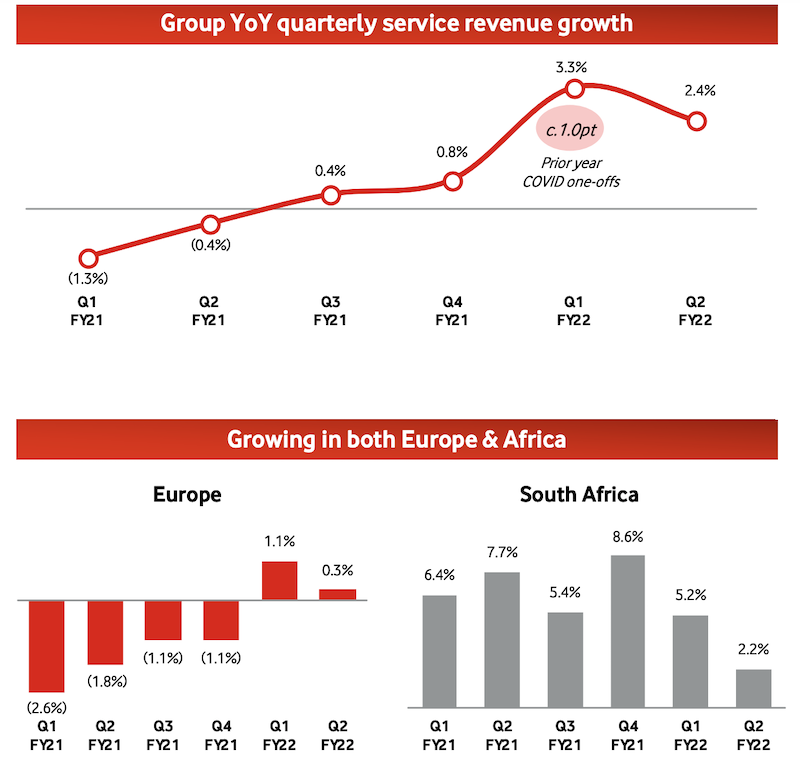 Vodafone reported a 2.4% year-on-year rise in service revenue on an organic basis for the quarter ending September 30th. Group revenue for the half year to September 30th was almost 22.5 billion euros, up 5% on a reported basis.

1.  "We now have over 50 million customers subscribing to a digital service, which leads to higher ARPU, improved distribution efficiency, higher NPS and lower churn. We are focused on further developing our strong positions in consumer IoT, Vodafone TV, home services, device lifecycle services and loyalty applications."

2. "Our IoT service was established in 2008 and has grown to be the largest IoT connectivity provider globally, with 136 million devices connected....Vodafone IoT currently generates 900 million euros annual revenue with double-digit revenue growth and a strong double-digit ROCE. The total addressable market is 10 billion euros and expected to grow 16% per annum, with further stimulus from the NextGenerationEU recovery plan."

3. "Our financial services businesses in Africa – encompassing Vodacom Group, Safaricom and Vodafone Egypt – have collectively grown to be the leading FinTech in Africa. Vodacom Group and Safaricom together have 57 million customers, with MPesa transaction value of 26.8 billion US dollars per month in the first six months of financial year 2022. Our African FinTech business has significant growth opportunities through penetration growth in existing markets, expanding into new markets and scaling new products, including the recent launch of the VodaPay ‘super-app’ in South Africa. The Vodacom Group has clear financial ambitions to grow its new services, which include financial services, at or above 20% CAGR." 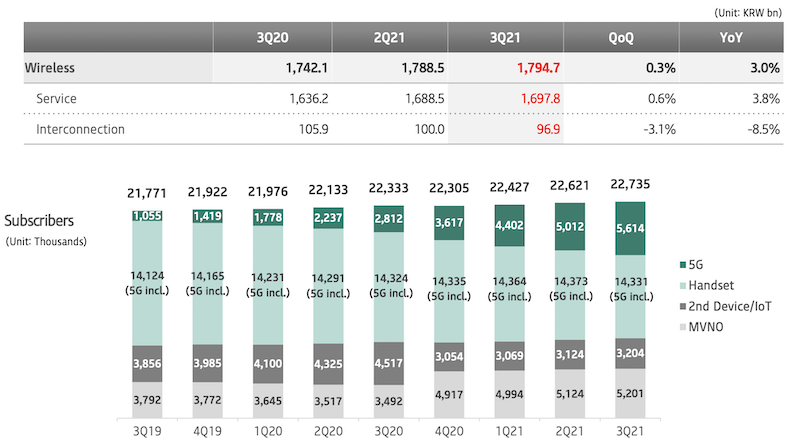 For the third quarter, Telefónica reported a 3.6% year-on-year rise in revenues on an organic basis to 9.3 billion euros. Service revenues in its Hispam region (Spanish speaking Latin America) rose 6%, on an organic basis, as fibre-to-the-home connections leapt 26%.

Telefónica reported that its IoT connectivity revenues rose by almost 24%, lifted by demand from "connected cars, big data, Industry 4.0 and utilities." The telco said it is leveraging new connectivity technologies, such as NB-IoT/LTE-M and p-LTE/5G, with "best in class" partners to pursue the IoT opportunity. Source: Telefónica statements

BT reported revenue of 10.3 billion British pounds (12 billion euros) for the six months to September 30th, down 3% year-on-year, "primarily due to ongoing legacy product declines, the impact of prior year divestments and foreign exchange." BT said these factors were "partially offset by stronger recurring BT Sport revenue as a result of the easing of lockdown restrictions, and higher rental bases in fibre-enabled products and Ethernet."

BT said revenue grew in Openreach (5%), was flat in Consumer, but declined in Enterprise (-5%) and Global (-14%) as a result of challenging market conditions. But excluding the impact of divestments and foreign exchange movements, revenue declined by just 5% to 1.65 billion pounds in the Global division.

In the third quarter of 2021, BT's revenue was down 2% to 5.2 billion pounds, as the performance of its Global division improved. The company said it is "continuing discussions regarding the future of BT Sport." Source: BT statement

Even More Momentum for Tesla

For the third quarter, Tesla reported a 57% year-on-year rise in revenues to 13.8 billion US dollars on the back of a 73% rise in vehicle deliveries.  The company's ancillary businesses also grew strongly with solar deployments up 46% to 83 MW, as solar roof deployments more than doubled year-on-year. Energy storage deployments increased by 71% amid strong demand for the Megapack. The Megapack is a large-scale rechargeable lithium-ion battery stationary energy storage product. Tesla recently announced a new Megapack factory with a capacity of 40 GWh, which compares to total Megapack deployments of 3 GWh in the past 12 months.

Telsa also highlighted the rollout of its “Safety Score” functionality, which will "also be used for our telematics insurance product. We actively monitor braking, turning, tailgating (unsafe following), forward collision warnings and forced autopilot disengagements in order to predict the probability of a collision," the company added. "We also launched our telematics insurance product in our first state – Texas – in early October. We believe our insurance premiums will be able to more accurately reflect chances of a collision than any other insurance product on the market. Additionally, we will proactively communicate to the user what driving adjustments need to be made to decrease probability of a collision." Source: Tesla statement

Andy Jassy, Amazon CEO, said: "We’ve nearly doubled the size of our fulfilment network since the pandemic began. In the fourth quarter, we expect to incur several billion dollars of additional costs in our consumer business as we manage through labour supply shortages, increased wage costs, global supply chain issues, and increased freight and shipping costs—all while doing whatever it takes to minimise the impact on customers and selling partners this holiday season. It’ll be expensive for us in the short term, but it’s the right prioritisation for our customers and partners.”

For the third quarter of 2021, Amazon reported a 15% year-on-year increase in sales to 110.8 billion dollars. Within that figure, sales of AWS rose by almost 39% to 16.1 billion dollars. Source: Amazon statement

Orange reported a 0.4% decline in revenues to 10.5 billion euros on an organic basis for the third quarter of 2021. Orange is now serving 10.8 million fibre-to-the-home (FTTH) customers out of 53.8 million connectable households. The FTTH client base rose 25.5% year on year, driven in particular by France and Poland.

Stéphane Richard, CEO of the Orange group, said: "In France, the good momentum continued with growth of 1.2 points in retail services. Orange fibre now has 5.6 million customers in France, an increase of 36% year on year. However, as yet our accounts reflect little of this promising trend owing to the decline in co-financing received from other operators on our fibre network in 2021 compared to 2020."

Orange said its operations in Africa and the Middle East continued to post very strong revenue growth, thanks to the performance of retail services. It said Orange Money, which is facing a tougher competitive environment, has an active customer base of 22.6 million, up 12.5% over one year. "Fixed broadband [in Africa and the Middle East} also continued to have excellent momentum, with a customer base that has increased 23.4% year on year," Orange added. "Likewise, B2B services posted spectacular growth, even though this still only contributes slightly to total revenues."

Having bought out partner Groupama, Orange now own 100% of Orange Bank, which is serving 1.6 million customers. Orange Bank Africa now has 600,000 customers in Ivory Coast. On a conference call with financial analysts, Paul de Leusse, CEO of Orange Bank, said: "Our loan origination will be beyond 850 million euros [in 2021] compared to less than 500 million euros last year. And our NBI, which is our revenues, is growing by 37% since last year, which -- and obviously, our losses are reducing quite quickly as well."

"We prefer to partner with fintechs because we find there that we have more, let's say, off-the-shelf solution, which we can implement. That's why we have made the acquisition of Anytime. That's why we signed a partnership with Younited, which is a leading French fintech on consumer loan. That's why also we are discussing with several insurtechs to do the same as we did with Younited. And obviously, these fintechs are much more efficient to providers with some digital solution compared to traditional banks."

Telecom Italia reported a 2.1% year-on-year decline in revenues to 3.8 billion euros on an organic basis for the third quarter of 2021. Domestic mobile revenues were down 4.5%, but revenues in Brazil rose 2.8% to 731 million euros.

Still, Telecom Italia said group service revenues fell just 1.4% in the third quarter on an organic basis, compared with 1.7% in the second quarter and 2.5% in the first quarter.

The group also said growth in revenues "related to innovative 'beyond connectivity' services continues, with the cloud showing a record increase (+ 25% year-on-year in the quarter) and total ICT revenues up 13.3% despite some projects being postponed to the fourth quarter." source: Telecom Italia statement