Mobile-broadband networks cover 84% of the world's population, yet Internet user penetration stands at just 47.1%, according to the ITU.  "While infrastructure deployment is crucial, high prices and other barriers remain important challenges to getting more people to enter the digital world," the ITU said. Source ITU statement 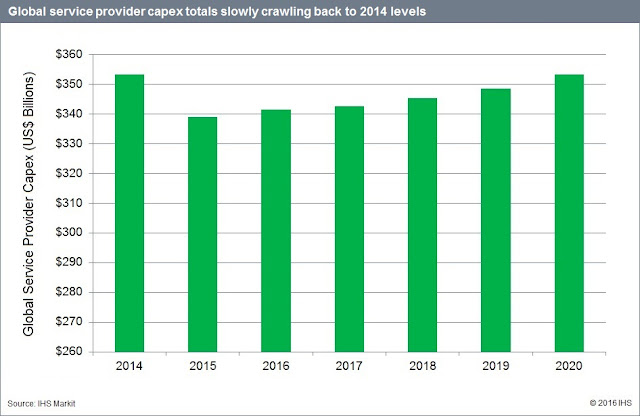 Research firm IHS forecast that worldwide service provider capex will rise 0.7% to 341 billion US dollars in 2016, "mainly propelled by a much-needed wave of investment in wireline broadband—for example, fiber to the X (FTTX)—in Europe. Spending on every type of hardware equipment except wireless and time-division multiplexing (TDM) voice will rise in 2016."

IHS projects that global telecom service revenue will  grow by over a percentage point this year to 1.93 trillion US dollars, after declining 4% in 2015. Source: IHS statement

Vodafone Group said its service revenue rose 2.3% year-on-year on an organic basis in the six months to September 30th. Vittorio Colao, Group CEO, said: "Europe [was] modestly ahead of our expectations - led by Germany and Italy ... Our substantial network investments and ‘more-for-more’ propositions have allowed us to capture opportunities from strong data demand... As Europe’s fastest-growing broadband operator, we are driving rapid uptake of our consumer fixed and TV services while our wholly converged enterprise business continues to outperform its peers.

"Competition in India has increased in the year, reducing revenue growth and profitability. We have responded to this changing competitive environment by strengthening our data and voice commercial offers and by focusing our participation in the recent spectrum auction on acquiring frequencies in the more successful and profitable areas of the country. Overall, we expect to sustain our underlying performance in the second half of the year and remain on track to meet our full-year objectives despite macroeconomic uncertainties." source: Vodafone statement

Deutsche Telekom reported a 5.9% year-on-year rise in revenue for the third quarter to 18.1 billion euros. The growth was fuelled by a 18% rise in revenues in the US to 9.2 billion US dollars, as T-Mobile USA added another 1.97 million subscribers in the quarter. In Germany, revenue was flat. source: Deutsche Telekom presentation

Facebook reported a 56% year-on-year increase in revenues for the third quarter to 7 billion US dollars. But the social network warned of slower growth ahead, primarily because it is running short of inventory in which to place adverts (as users will only tolerate so much advertising). "Revenue growth rates will decline in Q4 as we lap a strong fourth quarter in 2015," said Dave Wehner, CFO of Facebook. "Ad load will play a less significant role driving revenue growth after mid-2017. Over the past two years we have averaged about 50% compound revenue growth in advertising. Ad load has been one of the three primary factors fueling  that growth. With a much smaller contribution from this important factor going forward, we expect to see ad revenue growth rates come down meaningfully."

Wehner added that costs will rise: "We anticipate 2017 will be an aggressive investment year. Adding top engineering talent remains one of our key investment priorities as we continue to execute on our 3-, 5- and 10-year roadmap. We will continue to invest in our ability to recruit top technology talent both in the Bay Area and beyond. In addition, we expect to grow capital expenditures substantially as we continue to fund the ongoing data center expansion efforts that we have underway."

Mark Zuckerberg, CEO of Facebook, also flagged an increase in spending on virtual reality content: "And since we believe the next phase of VR is great software experiences, we're investing another $250 million in virtual reality content -- on top of the money that we've already invested." Source: Facebook earnings transcript
No comments: