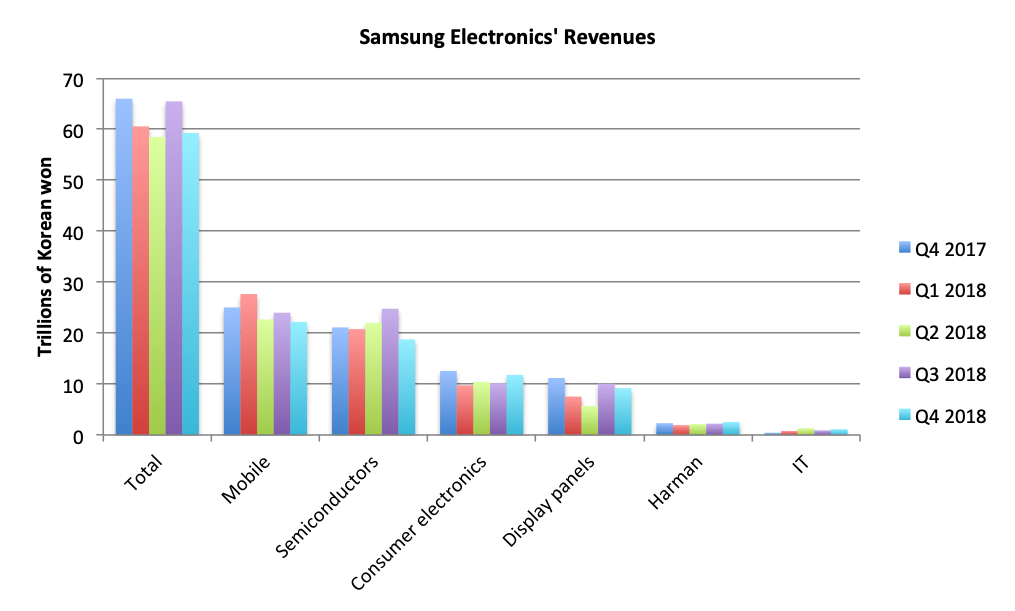 The sales of business units include inter-segment sales.

Samsung Electronics reported a 10% year-on-year fall in revenues for the fourth quarter of 2018 to 59.27 trillion Korean won (53 billion US dollars), driven by declines in its semiconductor and mobile divisions. It blamed the dip in sales in its mobile division on weak smartphone shipments, amid a stagnant market. Source: Samsung statements
4 comments:

Facebook reported a 33% year-on-year increase in revenues on a constant currency basis for the fourth quarter to 16.9 billion US dollars, down from 34% in the third quarter.

Separately, Facebook shut down a mobile app that paid users 20 dollars a month for allowing it to collect data on their iPhones, after Apple said the app breached its policies. The app monitored the user's web and phone activity, including how they use other apps, according to a TechCrunch report. Source: Facebook statement
No comments:

Tesla reported a 134% year-on-year increase in automotive revenue for the fourth quarter of 2018 to 6.32 billion US dollars. The company claimed its Model 3 was the best-selling passenger car in the US in terms of revenue in both the third and fourth quarter. "With nearly 140,000 units sold, Model 3 was also the best-selling premium vehicle (including SUVs) in the US for 2018 – the first time in decades an American carmaker has been able to secure the top spot," Tesla said.

Tesla is expecting to deliver a total of 360,000 to 400,000 vehicles in 2019, representing year-on-year growth of approximately 45% to 65%. By the end of 2019, Tesla is planning to start producing Model 3 vehicles at its Gigafactory Shanghai where it hopes the capital spend per unit of capacity will be less than half of that of the existing Model 3 line in Fremont.  The company said it is aiming for annualised Model 3 output in excess of 500,000 units sometime between the fourth quarter of 2019 and the second quarter of 2020.

Tesla recently launched “Navigate on Autopilot”, a feature that "allows, on most controlled-access roads such as highways, any Tesla vehicle with Enhanced Autopilot to change lanes, transition from one highway to another, and ultimately exit the highway when approaching the final destination."

Tesla also reported that energy generation and storage revenue in the fourth quarter increased by 25% year-on-year to 371 million dollars, mainly driven by a substantial growth in energy storage deployments. "Energy generation and storage revenue should increase significantly in 2019, mainly due to the storage business," Tesla said. Source: Tesla statement
No comments:

Source: Statista
Apple forecast revenue for the quarter ending March 31st will fall to between 55 billion and 59 billion dollars from 61.6 billion in the same quarter of 2018. That would represent a year-on-year decline of between 4% and 11% For the quarter ending December 29, it reported a 5% fall in revenues fo 84.3 billion dollars. Revenue from iPhones declined 15% from the prior year, while total revenue from all other products and services grew 19%.

Apple also said that more than half of the 1.8 billion iPhones it has ever sold are still in use, accounting for the bulk of the total 1.4 billion Apple devices in active use, which also include Macs, iPads and Apple Watches. source: Apple statement
No comments:

Verizon reported a 0.5% increase in total operating revenue to 34.3 billion US dollars for the fourth quarter of 2018,  excluding the impact of the new revenue recognition standard. For the whole of 2018, on a comparable basis, operating revenues grew approximately 2.2% to 130.9 billion dollars. Verizon said the "primary driver of the increase was continued wireless service revenue growth driven by step ups in access and net account growth." 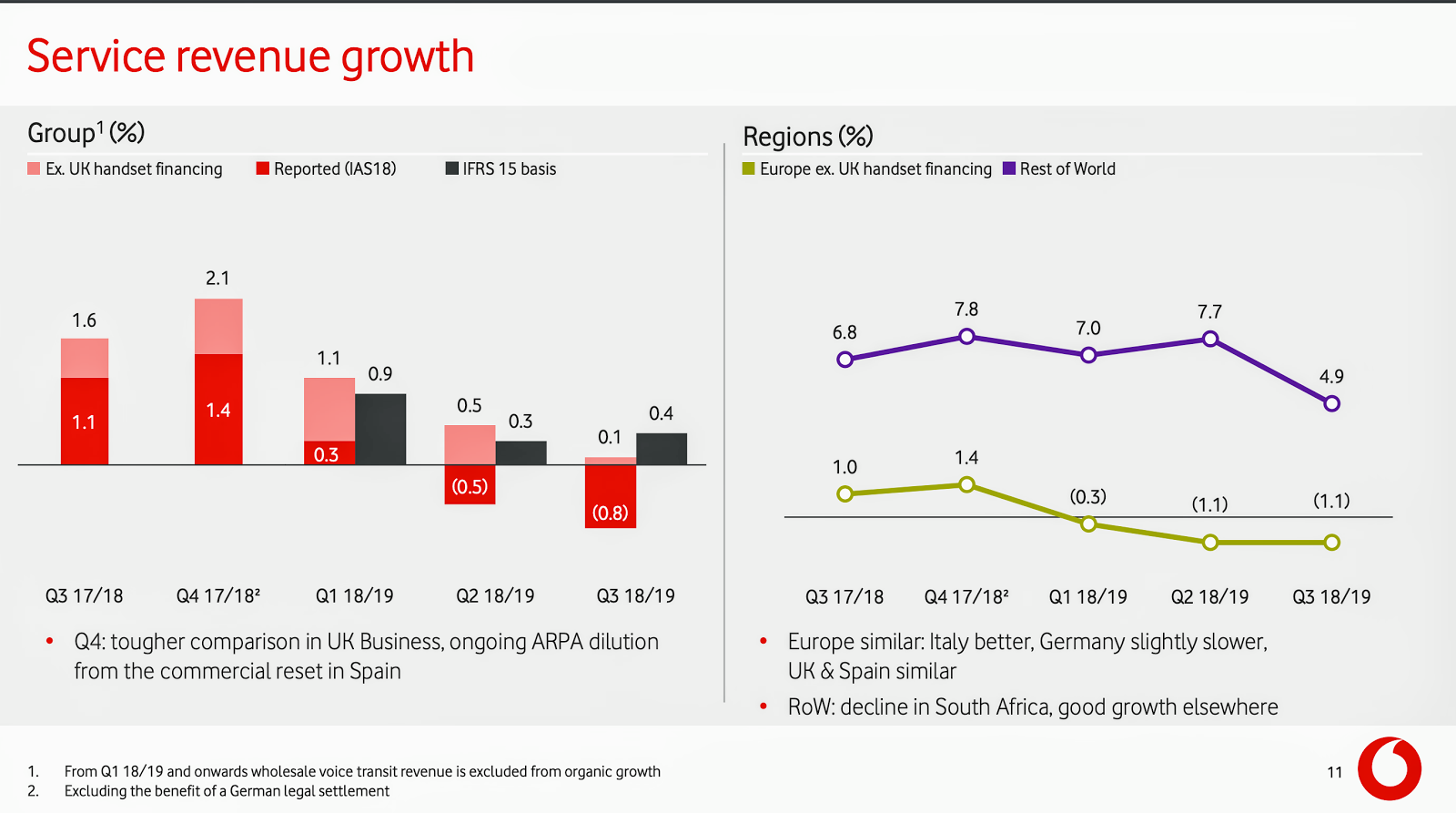 Vodafone reported a decline of 0.8% in group service revenue on an organic basis for the quarter ending December 31st. However, it said, excluding the impact of UK handset financing, organic service revenue would have risen slightly. "Growth in the majority of markets was offset by declines in Italy and in Spain, which were impacted by increased competition," Vodafone said.

Vodafone Business service revenues declined by 0.5% in the quarter, despite a 3.5% growth in fixed-line revenues "due to ongoing market share gains and strong growth in cloud services." But the mobile revenues in the business division were hit by a weaker performance at Vodacom and increased pricing pressure in Europe, particularly in the SoHo segment, as well as a slowdown in the automotive part of its IoT business. However, Vodafone said IoT connectivity revenues continued to grow strongly, with 27% growth in SIM connections to 80.9 million.

Vodafone also reported that its African payments platform M-Pesa (including Safaricom) maintained good momentum, with active customers growing 14% to 37 million, and transaction volumes up 27% in the quarter. Source: Vodafone statement 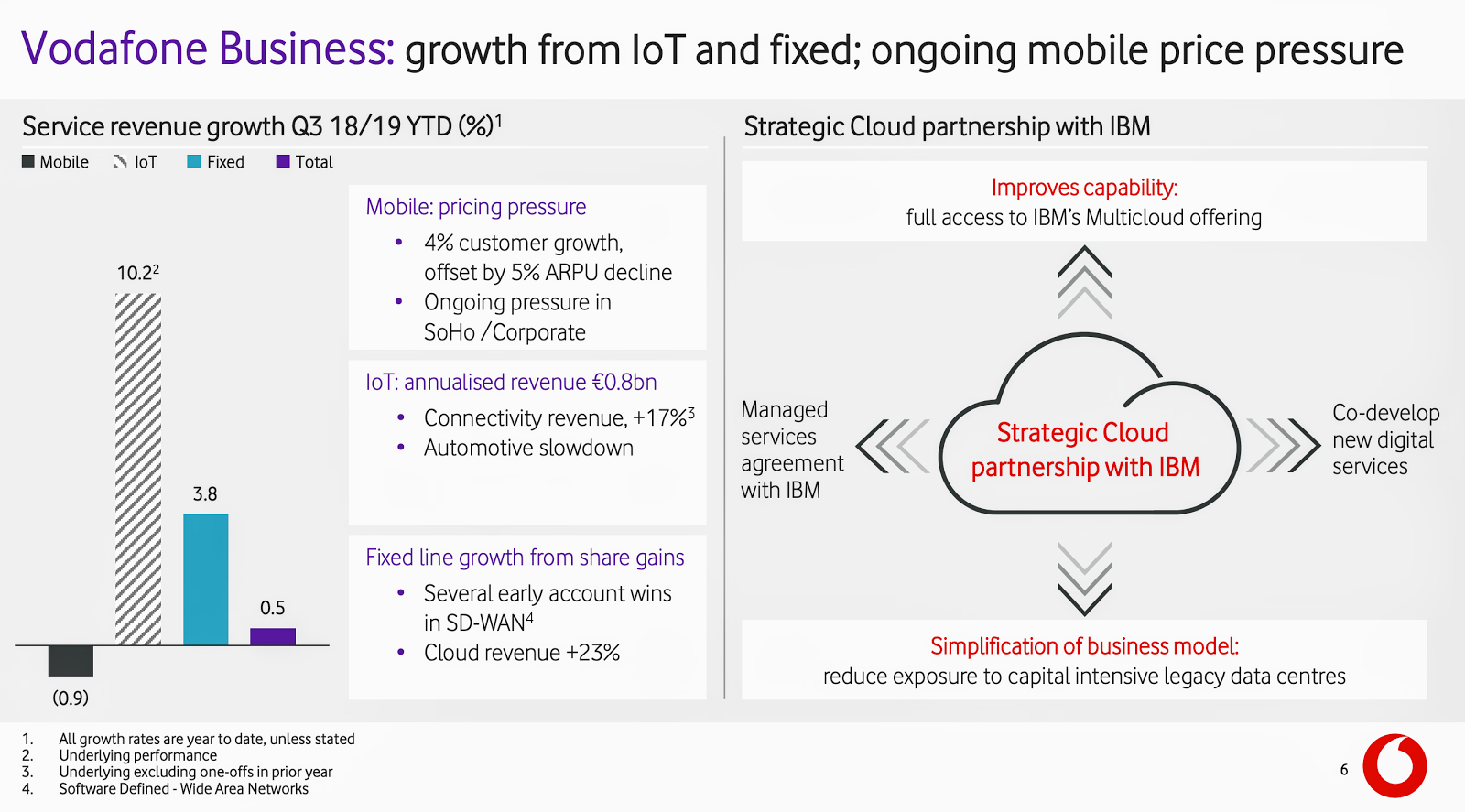 Apple revised its guidance for the quarter that ended on December 29. It now expects to report revenues of approximately 84 billion US dollars, having projected sales of between 89 billion and 93 billion dollars. Apple posted revenue of 88.3 billion dollars in the equivalent quarter in 2017.

In a letter to investors, CEO Tim Cook said the economic weakness in some emerging markets "turned out to have a significantly greater impact than we had projected," resulting in fewer iPhone upgrades than Apple had anticipated.

"Most of our revenue shortfall to our guidance, and over 100% of our year-over-year worldwide revenue decline, occurred in Greater China across iPhone, Mac and iPad," Cook wrote. "China’s economy began to slow in the second half of 2018."

However, Cook also admitted that, in some developed markets, "iPhone upgrades also were not as strong as we thought they would be. While macroeconomic challenges in some markets were a key contributor to this trend, we believe there are other factors broadly impacting our iPhone performance, including consumers adapting to a world with fewer carrier subsidies, US dollar strength-related price increases, and some customers taking advantage of significantly reduced pricing for iPhone battery replacements."

On a brighter note, Apple said that services generated over 10.8 billion dollars in revenue during the quarter, while sales of wearables grew by almost 50% year-over-year. Source: Apple statement