América Móvil, the largest telecoms company in Latin America, said its third quarter revenues climbed 8.6% year-on-year at constant exchange rates to 167 billion pesos (12.8 billion US dollars) "buoyed by data services that expanded rapidly on both the mobile and fixed platforms and by PayTV revenues that climbed 58%."

The company said "mobile revenues increased 10.7% and fixed-line revenues 3.2%; in South America they were up 12.0% at constant exchange rates. Absolutely all our operations registered revenue increases from a year before, with growth rates in Colombia, Chile, Ecuador, and Peru in the teens and that of Argentina slightly above 20%. Revenues of our U.S. operation, Tracfone, continued to expand rapidly—35% year-on-year." source: América Móvil statement
No comments: 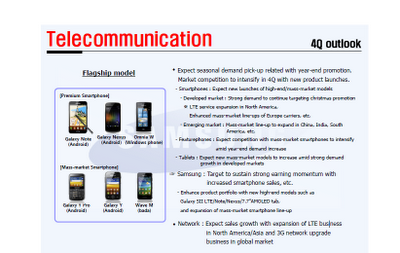 Samsung Electronics said its telecoms sales climbed 37% year-on-year to 14.9 trillion Korean won (13.48 billion US dollars) in the third quarter of 2011, lifted by a 20% rise in handset shipments. Samsung said the growth was led by its smartphone portfolio, notably the Galaxy SII. source: Samsung presentation
No comments: 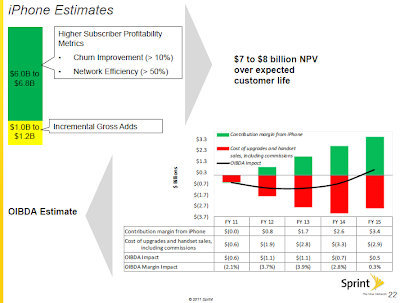 Sprint, the third largest telco in the U.S., said its operating revenues rose 2% year-on-year to 8.3 billion US dollars in the third quarter, due to higher postpaid ARPU and growth in the number of net prepaid subscribers, partially offset by lower wireline revenues and lower wireless equipment revenues. 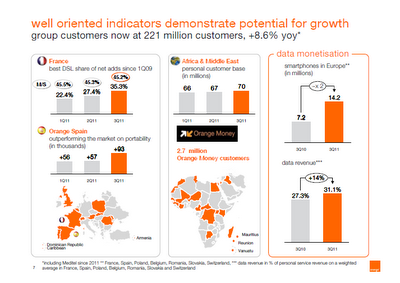 France Telecom said its revenues fell 2.1% year-on-year, on a comparable basis, in the third quarter to 11.28 billion euros. The Paris-based company said regulation cost it 188 million euros in revenue for the quarter, but it also acknowledged that it has seen an "anticipated slowdown".

France Telecom said its mobile data revenues climbed 14% year-on-year, boosted by a doubling in the number of smartphones on its networks to 14.2 million. source: France Telecom presentation
No comments: 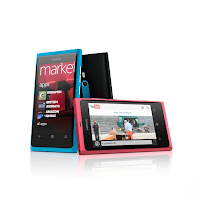 Nokia unveiled its first handsets to run the Windows Phone operating system. It described the flaghship device, the Nokia Lumia 800, as "stunningly social," adding that it features "one-touch social network access, easy grouping of contacts, integrated communication threads and Internet Explorer 9." The Lumia 800 also has a 3.7 inch AMOLED display, a 1.4 GHz processor and 16GB of internal memory.  The approximate retail price for the Lumia 800 will be approximately 420 euros, excluding taxes and subsidies, according to Nokia. source: Nokia statement
No comments: 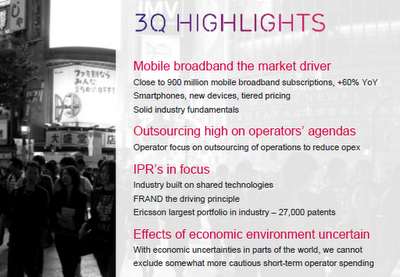 Ericsson, the leading supplier of mobile networks, said its sales increased 24% year-on-year, on a comparable basis, in the third-quarter to 55.5 billion Swedish krona (8.48 billion US dollars). Ericsson attributed the performance to strong demand for mobile broadband and the Swedish company saw sales rise 64% in Latin America and 49% in Northern Europe and Central Asia.

The Stockholm-based firm also said  it expects approximately 30% of all handsets sold in the third quarter to be smartphones, compared to around 20% for the full year 2010. "However, out of the installed base of subscriptions worldwide only around 10% use smartphones," Ericsson added.

Global fixed broadband subscriptions reached about 550 million by the end of the second quarter 2011, mainly boosted by strong growth in DSL in China, according to Ericsson. source: Ericsson statement
No comments: 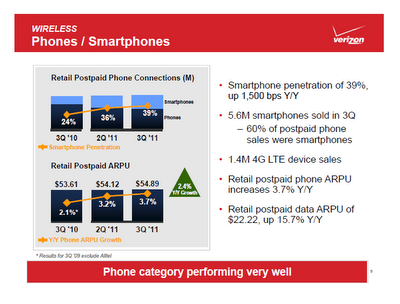 Verizon Communicatons said that its revenue rose 5.4% year-on-year in the third quarter to 27.9 billion US dollars, boosted by 20.5% growth in wireless data services and 18.5% growth in fibre-optic based services.

Verizon Wireless added that on October 20th its LTE service was available in 165 markets covering a population of more than 186 million, across the country.  During the quarter, the company introduced five new LTE devices: the Droid Bionic by Motorola, the Pantech Breakout, the Samsung Galaxy Tab 10.1 tablet, the Compaq Mini CQ10-688nr netbook and the HP Pavilion dm 1-3010nr notebooksource: Verizon presentation
No comments: 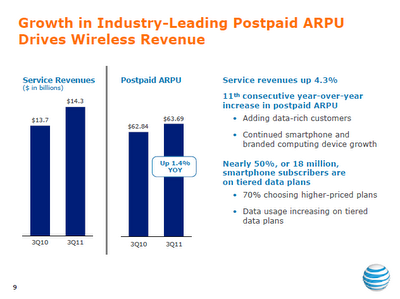 AT&T said its consolidated revenues fell 0.3% year-on-year to 31.5 billion US dollars in the third quarter of 2011, dragged down by a 2.2% fall in "wireline" revenues. The giant U.S. telco said that wireless service revenues increased 4.3% to 14.3 billion dollars in the quarter, as the company posted a net gain in total wireless subscribers of 2.1 million, to reach 100.7 million in service. source: AT&T statement
No comments:

Nokia said its net revenues fell 10% year-on-year at constant currencies to 8.98 billion euros in the third quarter, as rising sales at Nokia Siemens Networks failed to offset a sharp fall in device revenues. Nokia said its sales from devices and services fell 22% year-on-year in constant currencies, as device shipments fell 3% to 107 million units.

Nokia's smartphone shipments fell 38% year-on-year to 16.8 million units in the quarter, while mobile phone shipments rose 8% to almost 90 million. Nokia said: "The year-on-year increase in our mobile phones volumes in the third quarter 2011 was driven by strong demand for our dual SIM devices, which reached 17.9 million during the quarter, as well as higher demand for our QWERTY products." source: Nokia statement
No comments:

Apple said its revenues rose 39% year-on-year in the quarter ending September 24th to 28.3 billion US dollars, lifted by a 166% increase in iPad shipments to 11.12 million and a 21% rise in iPhone shipments to 17 million.  iPhone-related revenue rose 24% to 10.98 billion dollars, while iPad-related revenue rose 146% to 6.87 billion dollars. Apple's revenues rose 82% year-on-year in the previous quarter.

Apple forecast that its revenues in the current quarter will rise to 37 billion dollars (39% growth compared with 26.7 billion dollars in the equivalent quarter last year), following the sale of 4 million iPhone 4S units in the weekend after it went on sale on the 14th October. However, Peter Oppenheimer, Apple’s CFO, noted that the current quarter will span 14 weeks rather than 13. source: Apple statement
No comments:

Google said its mobile advertising business is now on track to generate 2.5 billion US dollars in revenue a year, which amounts to growth of 2.5 times in the past year. Google also said that its Google+ social network now has 40 million users who have uploaded 3.4 billion photos, while its Chrome web browser has 200 million users, and people have activated 190 million Android phones. source: New York Times article
No comments:

HTC Corporation, a leading maker of smartphones, said its total revenues rose 79% in the third quarter to 135.82 billion Taiwanese dollars (4.45 billion US dollars). The company didn't give reasons for the sales rise, but analysts say it has seen strong demand for its Android-based handsets.  source: HTC statement
No comments:

Launching the iPhone 4S, Apple said it has now sold more than 320 million iPods worldwide. The Californian company also said that its App Store now has  500,000 apps, including more than 100,000 game and entertainment titles, while the iTunes Store has more than 20 million songs, 85,000 TV shows and 14,000 movies to purchase. source: Apple statement