Boosted by strong sales of iPhones, Samsung handsets and Blackberries, AT&T is on course to sell a record number of integrated devices (smartphones) in one quarter, according to Randall Stephenson, the US telecoms giant's CEO, who also said there are now half a million Apple iPads connected to AT&T's network.

Speaking at a Goldman Sachs conference, Stephenson also said there has been "terrific uptake" of its new $15 a month, low-usage data tariffs. He added that AT&T's network supply chain is "stressed right now" and is constraining its capex spending, noting that its current annual capex budget of between 18 billion and 19 billion US dollars is "full capacity level for us." source: AT&T recording
No comments:

Research in Motion, maker of the BlackBerry, said that its revenue rose 31% year-on-year in the quarter ending August 28th to 4.62 billion US dollars as its smartphone shipments rose more than 45% to 12.1 million. The Ontario-based  company said the revenue breakdown for the quarter was approximately 79% for devices, 17% for service, 1% for software and 3% for other revenue.

RIM said it has now shipped approximately 115 million BlackBerry smartphones and the BlackBerry subscriber account base has grown approximately 56% year-on-year to more than 50 million.
RIM expects its revenue for the quarter ending November 27, 2010 to be in the range of 5.30 billion to 5.55 billion US dollars, which would represent year-on-year revenue growth of between 35% and 42%. source: RIM statement
No comments:

Nokia said its Ovi Mail service now has more than 14 million "email activations" and, in the past six months, 60% of new Ovi Mail accounts have been from Southeast Asia Pacific and Africa..

Nokia also said it has become the "single largest source of digital music revenue in markets including Brazil, Mexico and India, when Nokia digital billings for 2009 are compared against IFPI (International Federation of the Phonographic Industry) estimates".

The Finland-based company's Ovi Life Tools service is now available in India, Indonesia and China, and has more than 4.7 million users. Nokia has also joined forces with YES BANK and Obopay, to roll out a mobile money service in Pune, India, called Mobile Money Services by YES BANK. Nokia says the next step for an India-wide rollout is the city of Chandigarh. source: Nokia statement
No comments:

Vodafone's CEO Vittorio Colao said that 50% of the group’s mobile networks, which span much of Europe and India, now delivers theoretical peak download speeds of 14.4 Mbps, with uplinks of 2 Mbps, according to Mobile Business Briefing. He added that one third of Vodafone's total customer base browses the mobile Internet, a quarter play games, 20% use email, 15% use social networking service, and 11% make use of maps. source: Mobile Business Briefing
No comments: 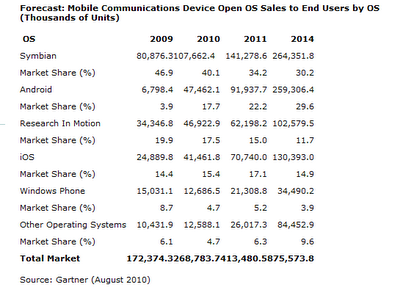 Orange Business Services, a unit of France Telecom, has set itself the following objectives:

Becoming number one for videoconferencing in France and one of the top three worldwide.

Step-up in Growth for VimpelCom

By the end of June, VimpelCom said it had almost 2.5 million broadband connections in Russia, up from 1.66 million a year earlier. Of these, 1.3 million were mobile broadband, up from 763,000 a year earlier. source: VimpelCom presentation
No comments: