América Móvil reported a 3.2% year-on-year increase in service revenues, at constant exchange rates, for the fourth quarter of 2019 to 209 billion Mexican pesos (11.25 billion U.S. dollars). The growth figure excludes Argentina, which is subject to inflation-adjusted accounting. The operator said its mobile revenues rose 5.7%, lifted by a 15.6% increase in Brazil where it is gaining market share. Source: América Móvil statement
No comments:

Orange Buoyed By Cloud and Security 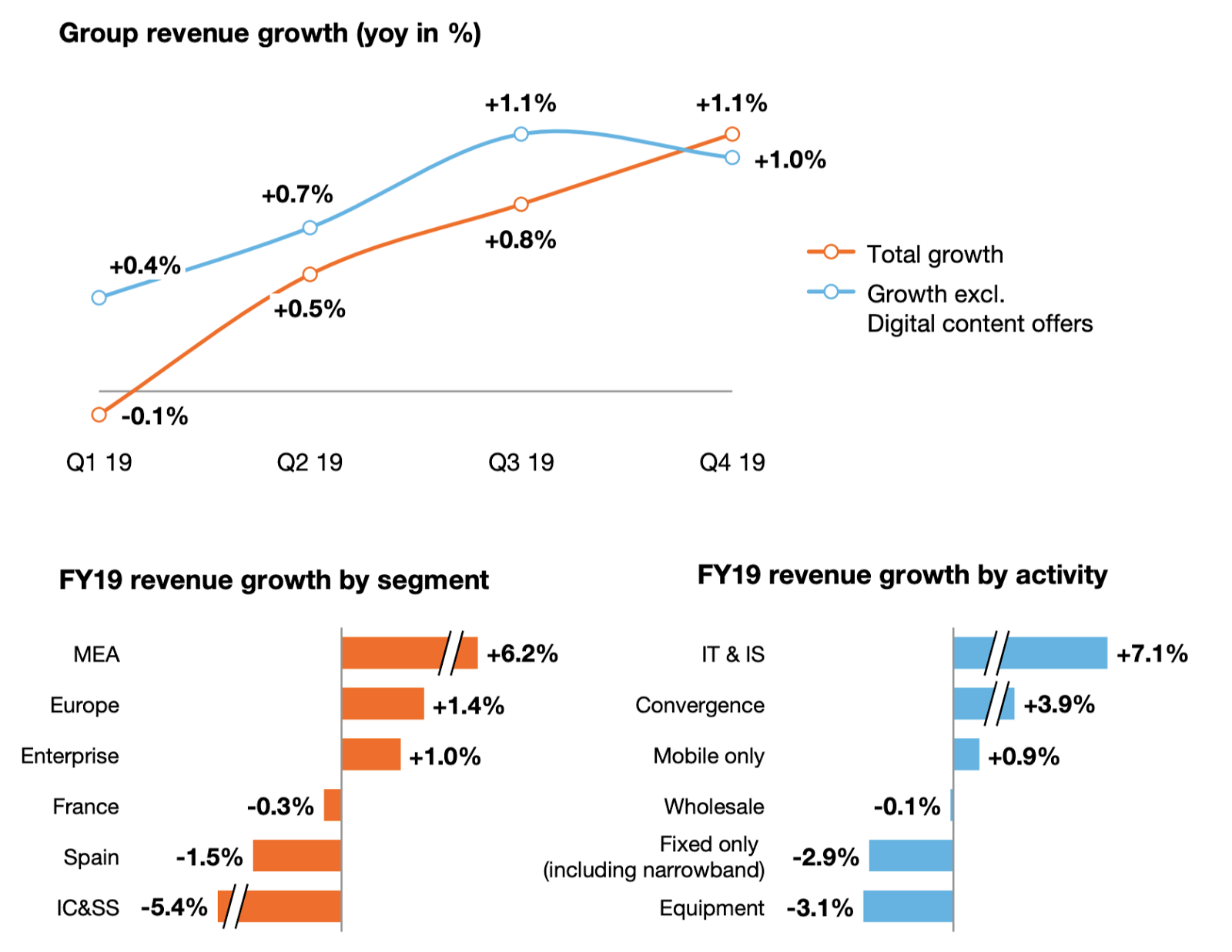 Orange reported a 1.1% year-on-year rise in revenues for the fourth quarter of 2019 on a comparable basis to 11.1 billion euros. Across 2019, revenue rose 0.6% boosted by "very strong momentum in Africa and the Middle East", a "solid performance in Europe and the return of growth in enterprise."  Orange said these factors "more than compensated for a very slight decline in France of 0.3% and a decline in Spain of 1.5% in 2019 due to that market's shift towards low cost."

Orange also reported that IT and systems integration activities' share of enterprise revenues climbed two percentage points to reach 37.2% in 2019.  "This increase reflects the performance of cloud and cybersecurity services, where Orange has become a European leader thanks to the acquisitions of SecureData and SecureLink," the operator said.

At the end of 2019, Orange Bank had over 500,000 customers, including 390,000 account holders in France. It has also been launched in Spain. Meanwhile, the video-on-demand service OCS Go now has 3.1 million customers. source: Orange collateral
No comments: 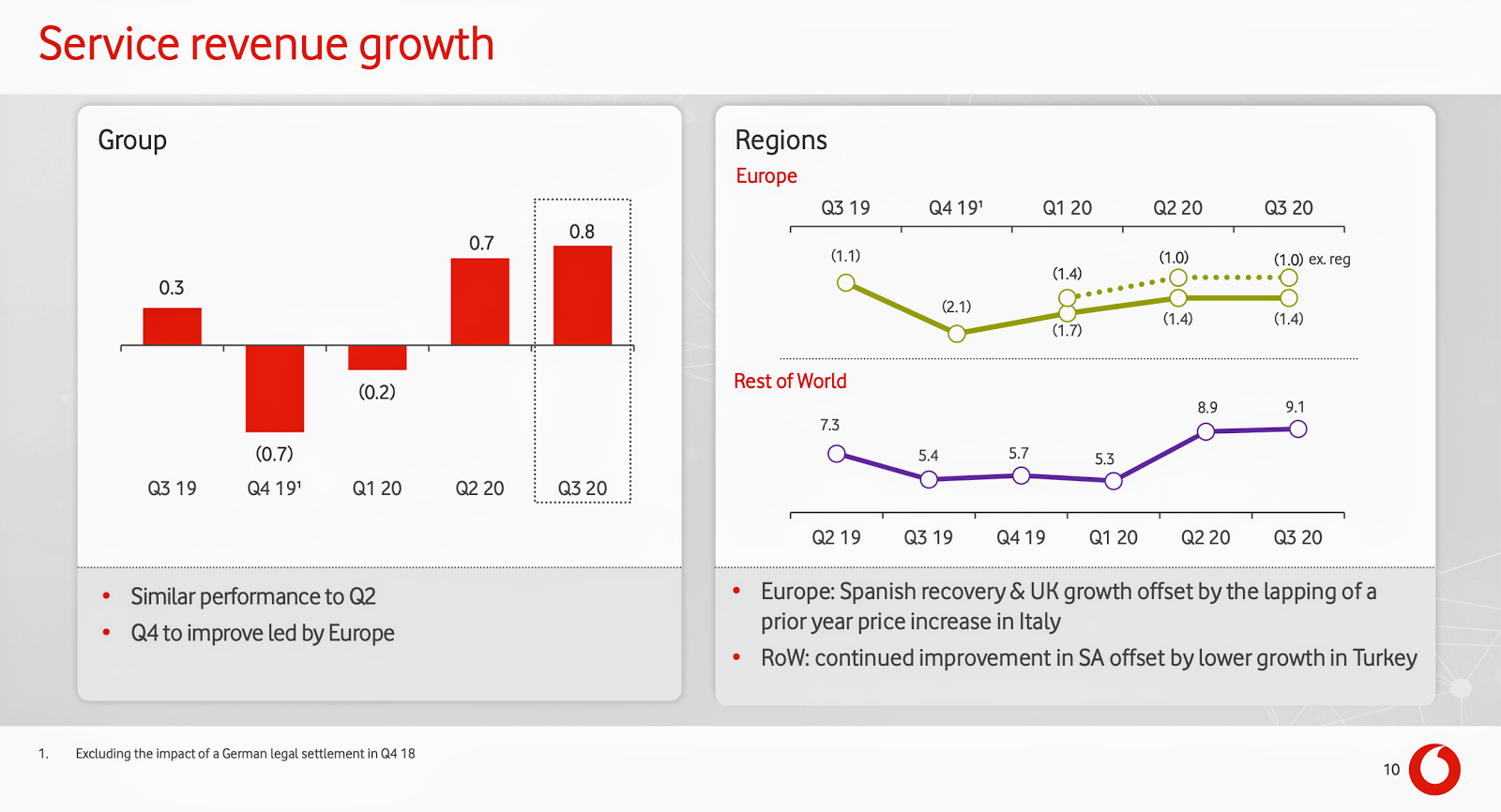 Vodafone reported a 6.8% year-on-year rise in group revenue for the quarter ending December 31 to 11.75 billion euros. However, on an organic basis, service revenue rose just 0.8%, as growth in Africa was offset by declines in Europe.

Vodafone said it is now offering "new speed-tiered unlimited mobile data plans"  in the seven markets where it has launched 5G. "We reached an unlimited consumer customer base of 3 million SIMs" at the end of the quarter, Vodafone reported, adding: "Reflecting the success of our unlimited plans, data volumes on our mobile networks continued to grow strongly in Europe in [the quarter], rising by 45%. Average smartphone usage for our overall customer base increased to 4.5 GB/month (+1.2 GB year-on-year)."

Alphabet, the owner of Google, reported a 19% year-on-year increase in revenues to 46.1 billion U.S. dollars for the fourth quarter on a constant currency basis. "At our scale, we are pleased with our rate of growth for 2019 and see ample opportunity going forward,' said Ruth Porat, CFO. "With respect to YouTube advertising, at a year-on-year growth rate of more than 30% in the fourth quarter, we're pleased with the ongoing strength and opportunity at YouTube. We see substantial continuing opportunity in direct response as well as with brand advertisers... the non-advertising services at YouTube, mainly from subscriptions, reached a 3 billion dollars revenue run rate in the fourth quarter."

Alphabet said that Waymo's (self-driving) cars have driven 20 million miles across more than 25 U.S. cities. "Waymo is now serving over 1,500 monthly active riders in Metro Phoenix and continues scaling fully driverless by matching early riders with driverless vehicles and charging for these rides. As Waymo looks to its evolution as a business, it's focusing on strategic partnerships. For example, it's working closely with OEMs and other businesses to build out ride hailing and delivery business lines."

Alphabet also reported that it added as many buildings to Google Maps using machine learning in 2019 as it had using all other techniques in the previous decade. "The Google Assistant now helps more than 500 million monthly users across 90 countries get things done across smart speakers and smart displays, phones, TVs, cars and more," Porat added. "I'm proud to announce that over 80 billion dollars has been earned by developers around the world from Google Play showing the popularity of our platform. There are now over 2 billion active monthly users of Google Play." Source: Alphabet investor documentation