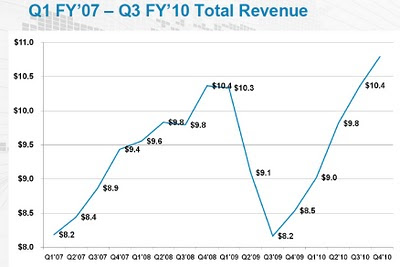 Cisco said that its net sales increased 27% year-on-year to 10.4 billion US dollars in the quarter ending May 1. "We witnessed a return to strong balanced growth across geographies, products and customer segments that we haven't seen since before the global economic challenges began," said John Chambers, chairman and CEO of Cisco.

However, Cisco also noted that the quarter ending May 1 had 14 weeks compared with 13 weeks in the equivalent quarter of 2009, which "probably" contributed 4 to 5 percentage points of the 27% year-over-year growth.

Cisco forecast that its revenue in the quarter ending September 1 will grow between 25% and 28% year-on-year to between 10.68 billion and 10.93 billion dollars, boosted by the acquisition of Tandberg, which Cisco expects to contribute around $200 million in revenue. sources: Cisco statement and Cisco transcript