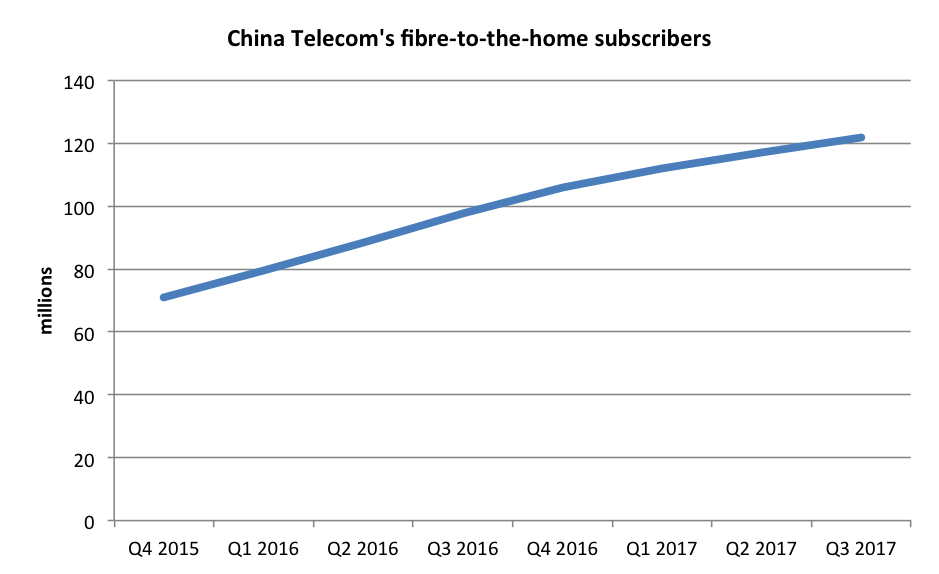 Amazon reported a 29% year-on-year increase in net sales on a like-for-like basis to 43.7 billion US dollars in the third quarter. However, its spending on technology and content in the first nine months of 2017 rose 41% year-on-year to 16.3 billion dollars, as Amazon pushes hard to establish its Alexa personal assistant as a new consumer computing platform.

“In the last month alone, we’ve launched five new Alexa-enabled devices, introduced Alexa in India, announced integration with BMW, surpassed 25,000 skills, integrated Alexa with Sonos speakers, taught Alexa to distinguish between two voices, and more. Because Alexa’s brain is in the AWS cloud, her new abilities are available to all Echo customers, not just those who buy a new device,” said Jeff Bezos, Amazon CEO. “And it’s working — customers have purchased tens of millions of Alexa-enabled devices, given Echo devices over 100,000 5-star reviews, and active customers are up more than 5x since the same time last year. With thousands of developers and hardware makers building new Alexa skills and devices, the Alexa experience will continue to get even better.”  source: Amazon statement 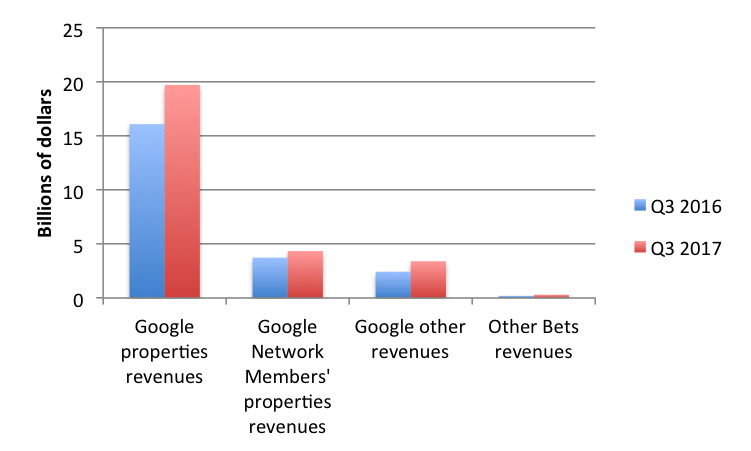 Alphabet, the parent of Google, reported a 24% year-on-year increase in revenues for the third quarter to 27.77 billion US dollars. "Our culture of innovation is building our non-advertising revenue streams in cloud, play and hardware," said Ruth Porat, CFO of Alphabet, on a conference call with analysts. "Earlier this month, for example, we launched our expanded line of hardware products, bringing the best AI software and hardware together and building on the first generation of Made by Google products we introduced last year. Longer-term, we remain excited about the opportunities in our Other Bets with ongoing progress."

Orange reported a 0.9% year-on-year increase in revenues on a comparable basis in the third quarter to 10.27 billion euros. Orange said "the impact of new regulations in Europe, with the end of roaming charges for customers travelling in Europe, was largely offset by increased interconnection revenue with operators in other European countries (visitor roaming) resulting from increased usage by their customers on Orange networks across Europe."

In Spain, Orange reported strong growth in mobile services revenue (+7.5% in the third quarter, unchanged from the second quarter), while fixed broadband revenue rose 8.3%, as in the second quarter. source: Orange statement

Telefónica Buoyed by Video and M2M 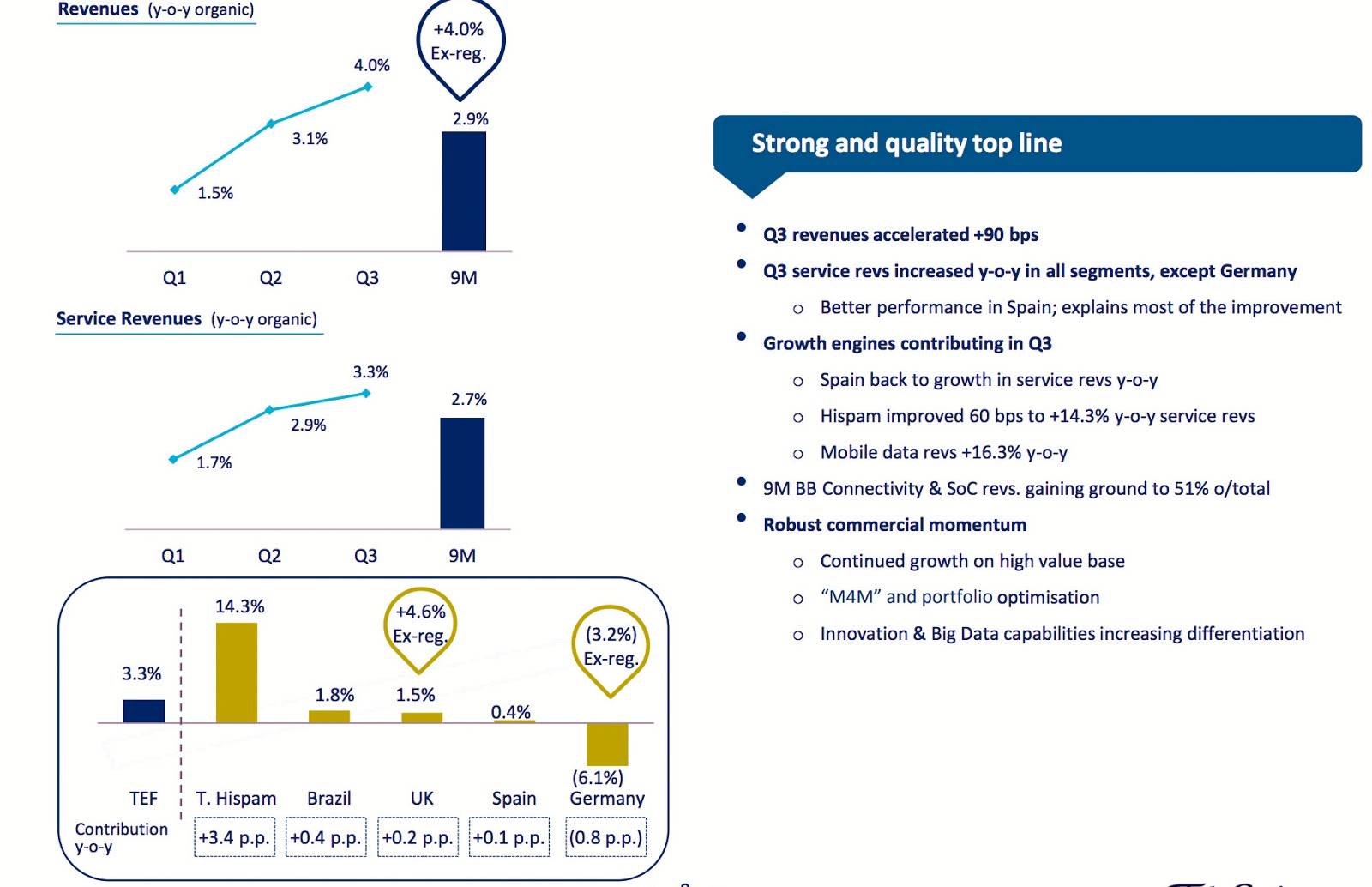 Telefónica reported digital services revenues of 1.3 billion euros for the quarter, as year-on-year growth accelerated sequentially to 8.1% due to the improved revenue performance from video, cloud and M2M.  source: Telefónica statement 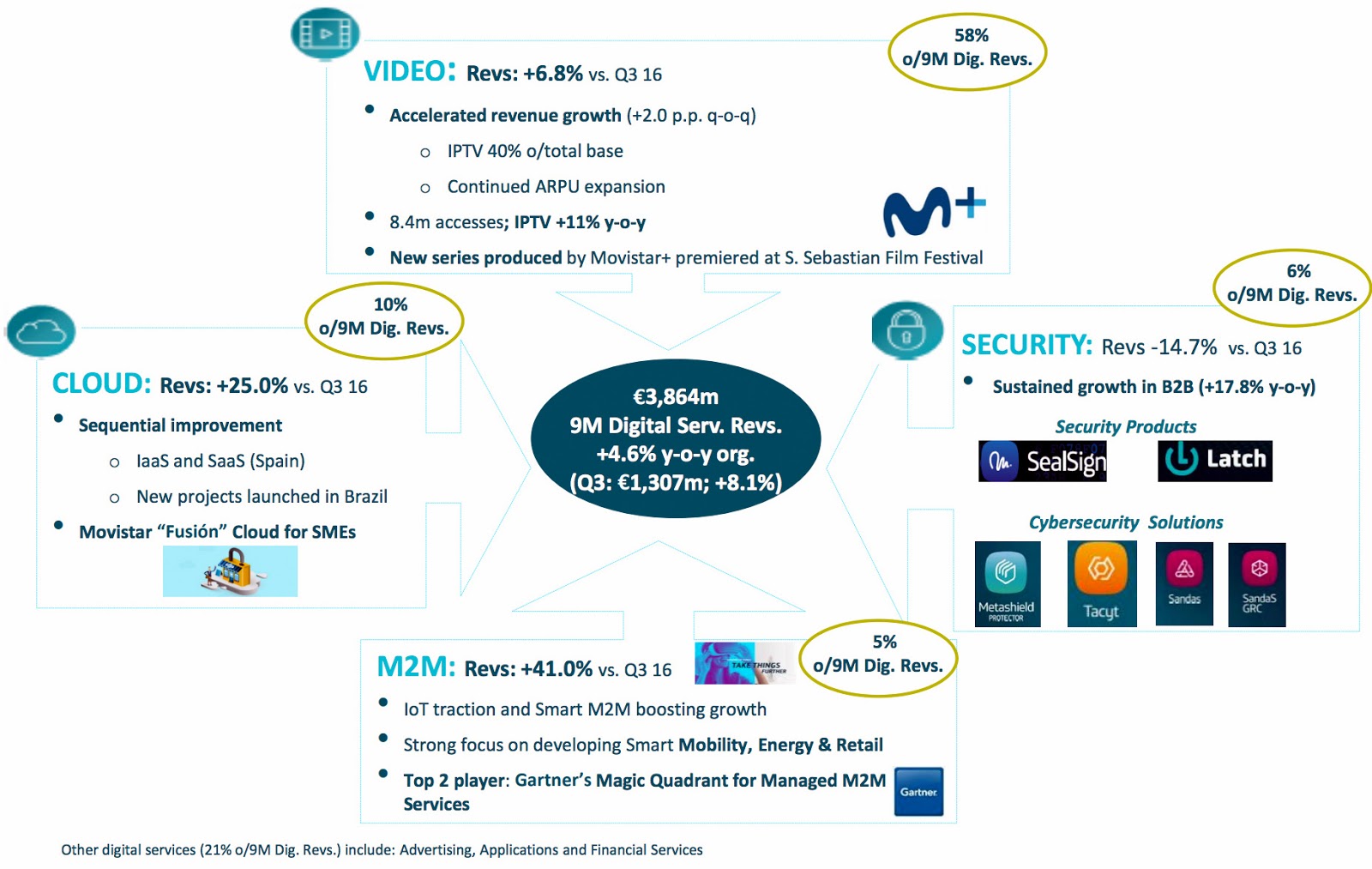 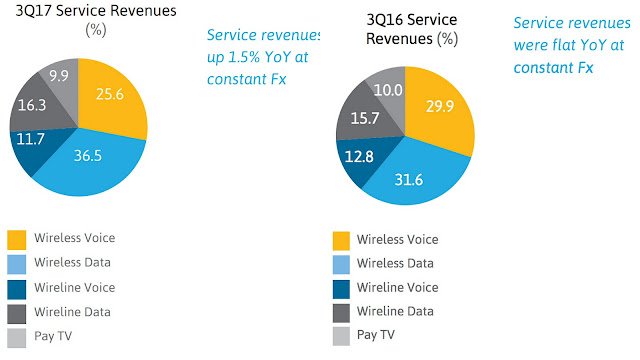 For the third quarter, América Móvil reported a 1.5% increase in service revenues at constant exchange rates to 210 billion Mexican pesos (10.9 billion US dollars), despite the impact of the natural disasters that hit Mexico, Puerto Rico and, to some extent, the U.S. In Latin America, mobile data revenues were up 24% year-on-year. source: América Móvil statement
No comments:

AT&T reported revenues for the third quarter of 39.7 billion dollars, down almost 3% year-on-year. It said the fall was primarily due to declines in legacy wireline services and consumer mobility. In the wireless market, AT&T is facing aggressive competition from T-Mobile US and Verizon Wireless, in particular. 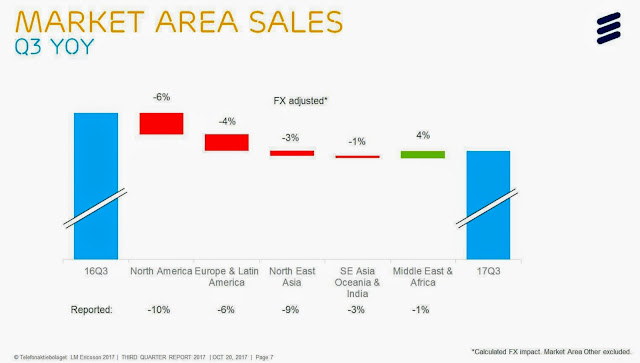 Ericsson reported a 3% year-on-year fall in revenues in the third quarter on a like for like basis to 47.8 billion Swedish krona (4.96 billion euros).  CEO Börje Ekholm said:"The general market conditions continue to be tough... Sales in North America, adjusted for comparable units, currency and the rescoped managed services contract were stable. We also saw growth returning in several countries as operators are increasing their investments in network capacity. Sales in Mainland China declined as the market is normalizing following a period of significant 4G deployments, representing more than 60% of global 4G volumes in the industry. We have managed to increase our LTE market shares in Mainland China to position Ericsson in 5G." Source: Ericsson presentation

Verizon reported a 2.5% year-on-year increase in revenues in the third quarter to 31.7 billion U.S. dollars.  Although wireless service revenue fell 5.1% to 15.8 billion dollars,  wireless equipment revenue was up 5.5% and wireline revenue rose 1.1% thanks to the acquisition of XO Communications.

The U.S. operator said telematics revenue was over 220 million dollars in the quarter, including Fleetmatics and Telogis, while total Internet of Things revenue increased approximately 13% in the quarter on an organic basis.  Matt Ellis, CFO, added: "In terms of the over-the-top [video].. this is a space where we think there's an opportunity for us to play. We think that it makes sense for us to play in that space, but we don't want to launch just a me-too type product. So we are continuing to look at what makes sense for us to launch something that's differentiated in that space. Probably around live programming. But how and when we launch something will be TBD." source: Verizon statements

Netflix reported a 33% year-on-year rise in global streaming revenue to 2.9 billion US dollars in the third quarter, driven by a 24% increase in average paid memberships and 7% growth in the average selling price.  The company said it added 5.3 million members globally (up 49% year-over-year). For the fourth quarter, it forecast global net adds of 6.3 million (1.25 million in the US and 5.05 million internationally).

Netflix recently announced price increases in many markets for its HD and 4K video plans while keeping its standard definition plan mostly unchanged.

Netflix said: "Investors often ask us about continued access to content from diversified media companies. While we have multi-year deals in place preventing any sudden reduction in content licensing, the long-term trends are clear. Our future largely lies in exclusive original content that drives both excitement around Netflix and enormous viewing satisfaction for our global membership and its wide variety of tastes. Our investment in Netflix originals is over a quarter of our total P&L content budget in 2017 and will continue to grow. With 17 billion dollars in content commitments over the next several years and a growing library of owned content (2.5 billion dollars net book value at the end of the quarter), we remain quite comfortable with our ability to please our members around the world. We’ll spend 7-8 billion dollars on content (on a P&L basis) in 2018." source: Netflix statement