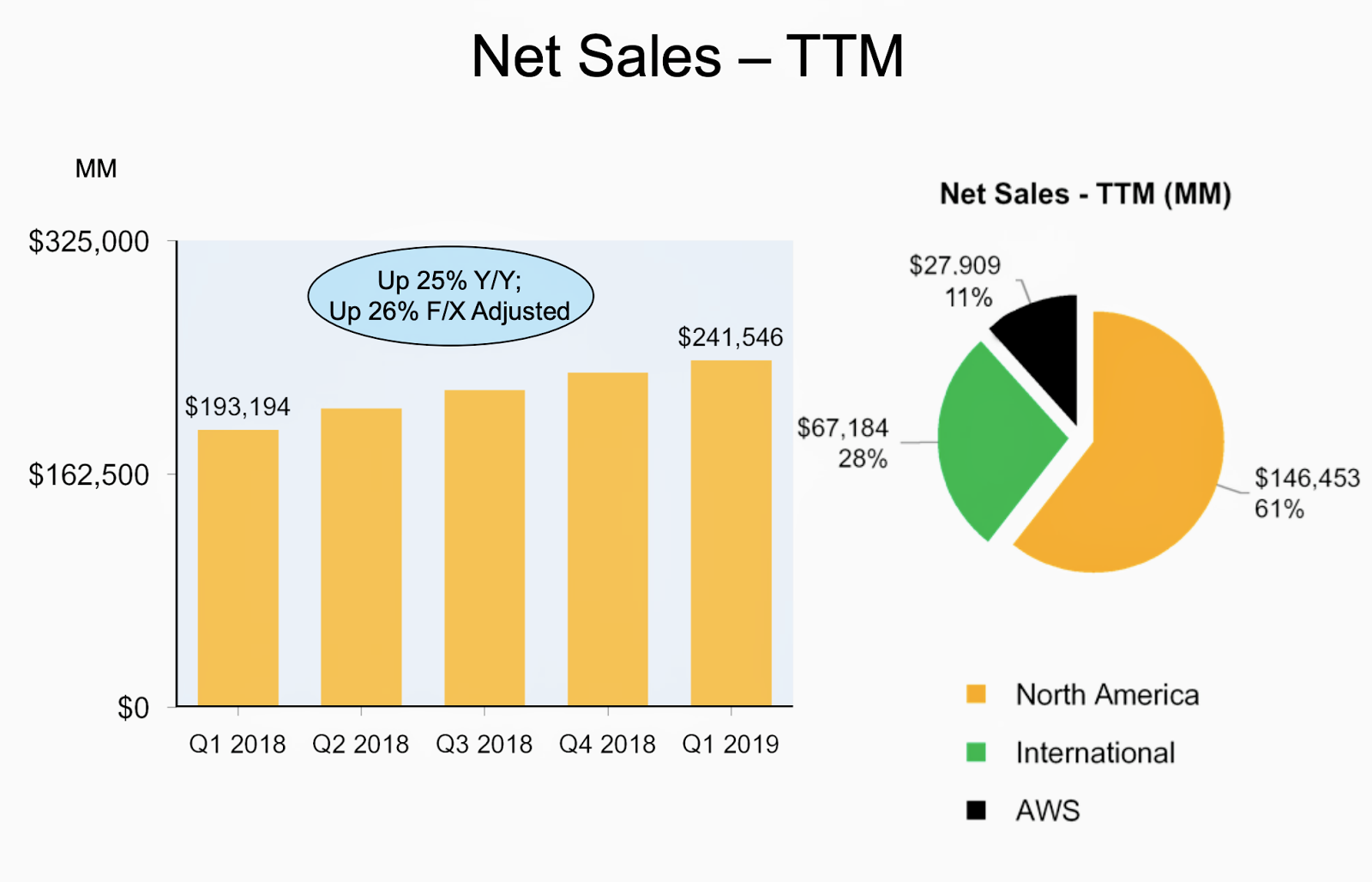 Amazon said it expects its revenue to grow by between 15% and 20% year-on-year in the second quarter to between 59.5 billion and 63.5 billion dollars. This guidance anticipates an unfavourable impact of approximately 150 basis points from foreign exchange rates. For the first quarter of 2019, Amazon reported a 19% increase in sales on a like-for-like basis to 59.7 billion dollars. Sales in North America were up 17%,  international sales up 19% and AWS was up 42%. source: Amazon statement
No comments:

Despite a barrage of negative publicity, Huawei reported a 39% year-on-year increase in revenue for the first quarter of 2019 to 179.7 billion Chinese yuan (28.8 billion US dollars).  Huawei said it had signed 40 commercial 5G contracts with operators by the end of March 2019, and had shipped more than 70,000 5G base stations, adding 2019 will see "large-scale deployment of 5G around the world".

Huawei also said it shipped 59 million smartphones in the first quarter. Moreover, it claimed to have launched the world's first 5G-enabled Wi-Fi 6 access point, and to have shipped more Wi-Fi 6 products than any other company worldwide. source: Huawei statement 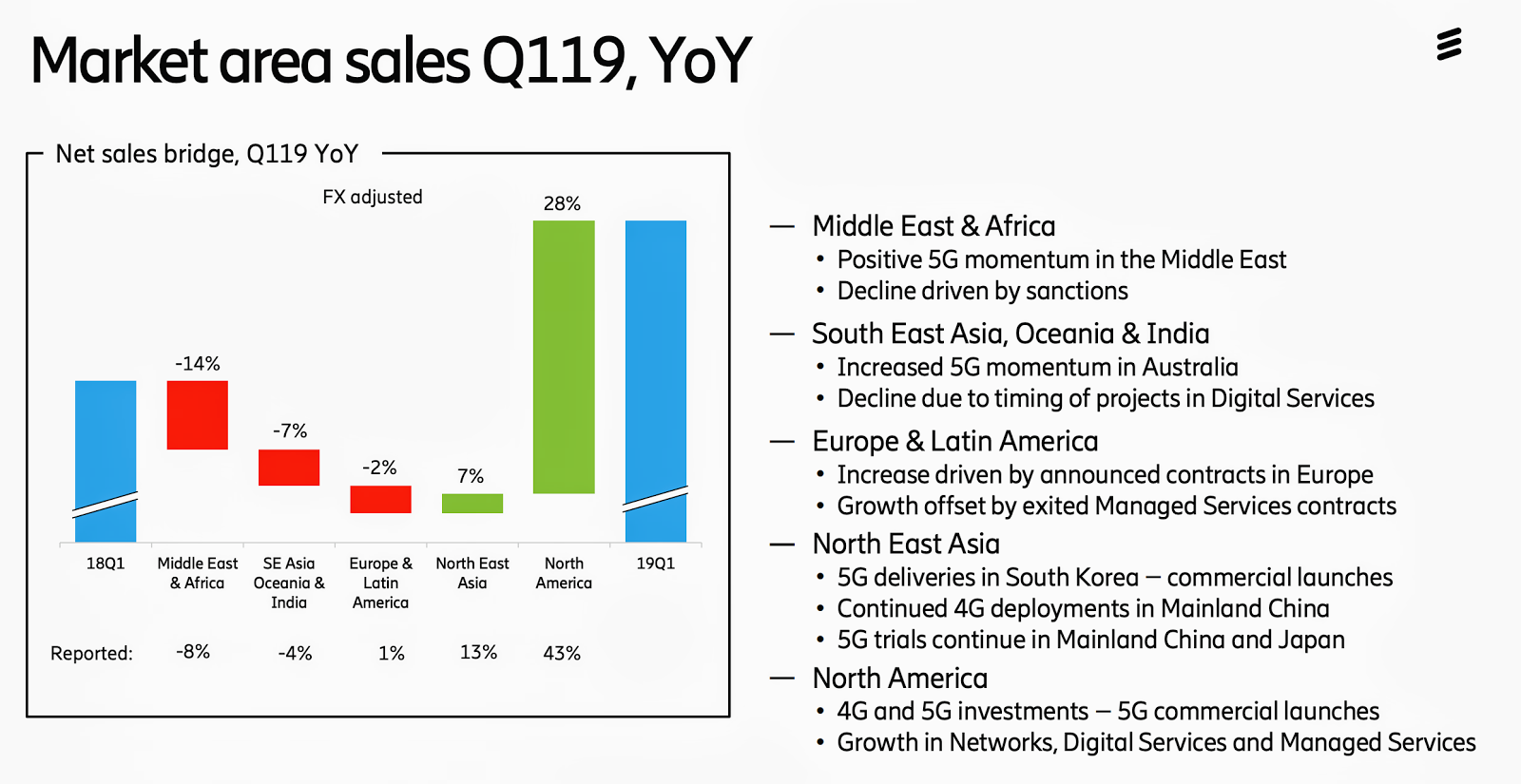 Ericsson reported a 7% organic year-on-year increase in sales for the first quarter of 2019 to 48.9 billion Swedish Krona (4.7 billion euros). The rise was fuelled by strong demand in North America for both 4G and 5G equipment, as well as 5G sales in South Korea.  Ericsson says it expects sales in North America to remain strong and large 5G deployments in parts of Asia to commence at the end of 2019.  Source: Ericsson presentation
No comments:

Uber claims its total addressable market (TAM) in personal mobility is worth 5.7 trillion US dollars per annum. That represents 11.9 trillion miles of travel per year by the inhabitants of 175 countries, Uber reported in its IPO prospectus, explaining: "We include all passenger vehicle miles and all public transportation miles in all countries globally in our TAM, including those we have yet to enter, except for the 20 countries that we address through our ownership positions in our minority-owned affiliates ...We estimate that these 20 countries represent an additional estimated market opportunity of approximately 0.5 trillion dollars."

In 2018, Uber spent 457 million dollars on R&D in autonomous vehicles and other new technologies, such as flying cars. "We expect to increase our investments in these new initiatives in the near term," Uber added. "We also expect to spend substantial amounts to purchase additional dockless e-bikes and e-scooters, which are susceptible to theft and destruction, as we seek to build our network and increase our scale, and to expand these products to additional markets."

Uber says its Advanced Technologies Group, which has more than 1,000 employees working in Pittsburgh, San Francisco, and Toronto, has built over 250 self-driving vehicles, collected data from millions of autonomous vehicle testing miles, and completed tens of thousands of passenger trips. "We believe that there will be a long period of hybrid autonomy, in which autonomous vehicles will be deployed gradually against specific use cases while drivers continue to serve most consumer demand," Uber said. "As we solve specific autonomous use cases, we will deploy autonomous vehicles against them. Such situations may include trips along a standard, well-mapped route in a predictable environment in good weather. In other situations, such as those that involve substantial traffic, complex routes, or unusual weather conditions, we will continue to rely on drivers....Deciding which trip receives a vehicle driven by a driver and which receives an autonomous vehicle, and deploying both in real time while maintaining liquidity in all situations, is a dynamic that we believe is imperative for the success of an autonomous vehicle future. " source: Uber IPO prospectus
No comments: