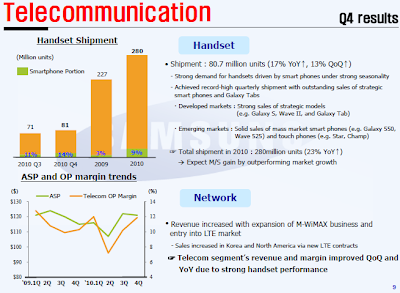 Samsung Electronics, one of the world's largest handset makers, said  its telecoms division's sales rose 19% year-on-year in the fourth quarter to 12.11 trillion Korean won (10.9 billion US dollars). Its handset shipments climbed 17% year-on-year to 80.7 million, boosted by rising sales of smartphones.

Samsung said it expects global demand for handsets to grow a "high single digit %" in 2011 and that its own shipments will grow faster than the market. source: Samsung presentation
No comments:

AT&T, one of the U.S.'s largest telecoms companies, said its revenues grew 2.1% year-on-year in the fourth quarter of 2010 to 31.4 billion US dollars, fuelled by a 9.9% increase in wireless revenues.  Wireless data revenues climbed 27.4%.

Nokia, the world's largest handset maker, said its fourth quarter 2010 net sales were flat year-on-year at 12.7 billion euros in constant currencies, despite a 36% increase in smartphone shipments to 28.3 million units and a rise in the average selling price of its devices to 69 euros from 64 euros a year earlier.

KDDI, Japan's second largest telecoms company, said that its operating revenues fell 1% year-on-year in the quarter ending December 31 to 853.4 billion yen (10.41 billion US dollars). It blamed falling voice revenues in its mobile business.  KDDI said that the Japanese economy is stagnating, after showing signs of recovery, and that competition in the telecoms market is entering a new phase with the ongoing convergence of fixed-line and mobile telecommunications and broadcasting. source: KDDI statement
No comments:

Verizon Communications, one of the U.S.'s largest telecoms companies, said its revenue, on a like-for-like basis, grew 2.3% year-on-year to 26.4 billion US dollars in the fourth quarter of 2010. The company said that wireless service revenue rose 7.7%, boosted by a 25.5% rise in wireless data revenue, while its revenue from fibre-based landline services climbed 26.8%.

Fran Shammo, Verizon's chief financial officer, said the company sees accelerated top-line revenue growth rates in the range of 4% to 8% in 2011. He said that "this outlook is based on the continued growth in strategic businesses -- aided by Verizon’s prior investments in technology; sales and recurring revenues from the newly announced Verizon iPhone and LTE wireless devices; continued growth in revenues from FiOS (fibre) and strategic business services; and a stable to improving economic environment."

With the introduction of the iPhone and LTE devices, Verizon said it sees smartphone penetration rates increasing from the current 26% to more than 50% by the end of 2011.

Verizon said it had a total of 94.1 million customers at the end of the fourth quarter, plus a further 8.1 million  machine-to-machine and telematics connections. Verizon Wireless customers sent or received more than 180 billion text messages in the quarter, together with nearly 4.5 billion picture/video messages and completed more than 20 million music and video downloads from Verizon Wireless. The equivalent figures for the fourth quarter of 2009 were 162 billion text messages, more than 4 billion picture/video messages and more than 38 million music and video downloads.

In 2010, Verizon's capital expenditure totalled 16.5 billion dollars compared with 16.9 billion dollars the previous year. The company expects capex to be flat or slightly down in 2011. source: Verizon statements
No comments:

Ericsson, the world's leading supplier of mobile networks, said its sales in the fourth quarter rose 7% year-on-year on a like-for-like basis to 62.8 billion Swedish krona (9.58 billion US dollars). Ericsson said sales of mobile broadband equipment, including radio, backhaul and evolved packet core, increased in the quarter, driven by strong demand in the US and Japan, in particular.

Ericsson said that global mobile broadband subscriptions increased 30% in 2010, driven by strong sales of smartphones, and it forecast that mobile data traffic will almost double annually over the coming years. The Swedish company added that, on average, smartphones generate approximately 10 times more traffic compared to feature phones, while a mobile PC user generates 100 times more traffic than a feature phone use.

Ericsson also said that global mobile penetration is now 76% and total mobile subscriptions have reached 5.3 billion. It added that global fixed broadband subscriptions grew by 17 million to reach 504 million during the third quarter of 2010, mainly boosted by strong growth in DSL in China.

Ericsson said WCDMA networks cover more than 35% of the world’s population and almost all of these networks have also launched HSPA. source: Ericsson statement
No comments:

Sony Ericsson said its net sales fell 13% year-on-year in the fourth quarter of 2010 to 1.53 billion euros and 7% in the full year to 6.29 billion euros. The joint-venture said it shipped 11.2 million handsets during the fourth quarter, a year-on-year decrease of 23%, as it streamlined its portfolio to focus on higher-end smartphones running Android.

One Billion Mobile Broadband Connections in 2011?

By 2015, Ericsson believes mobile broadband subscriptions will top 3.8 billion, with 95% of these connected to HSPA, CDMA and LTE networks. source: Ericsson statement
No comments:

Samsung Electronics said it has sold 10 million of its Galaxy S smartphones, which run the Android operating system and have a Super Amoled display, since the model was launched in June 2010. source: Telecompaper article.
No comments: