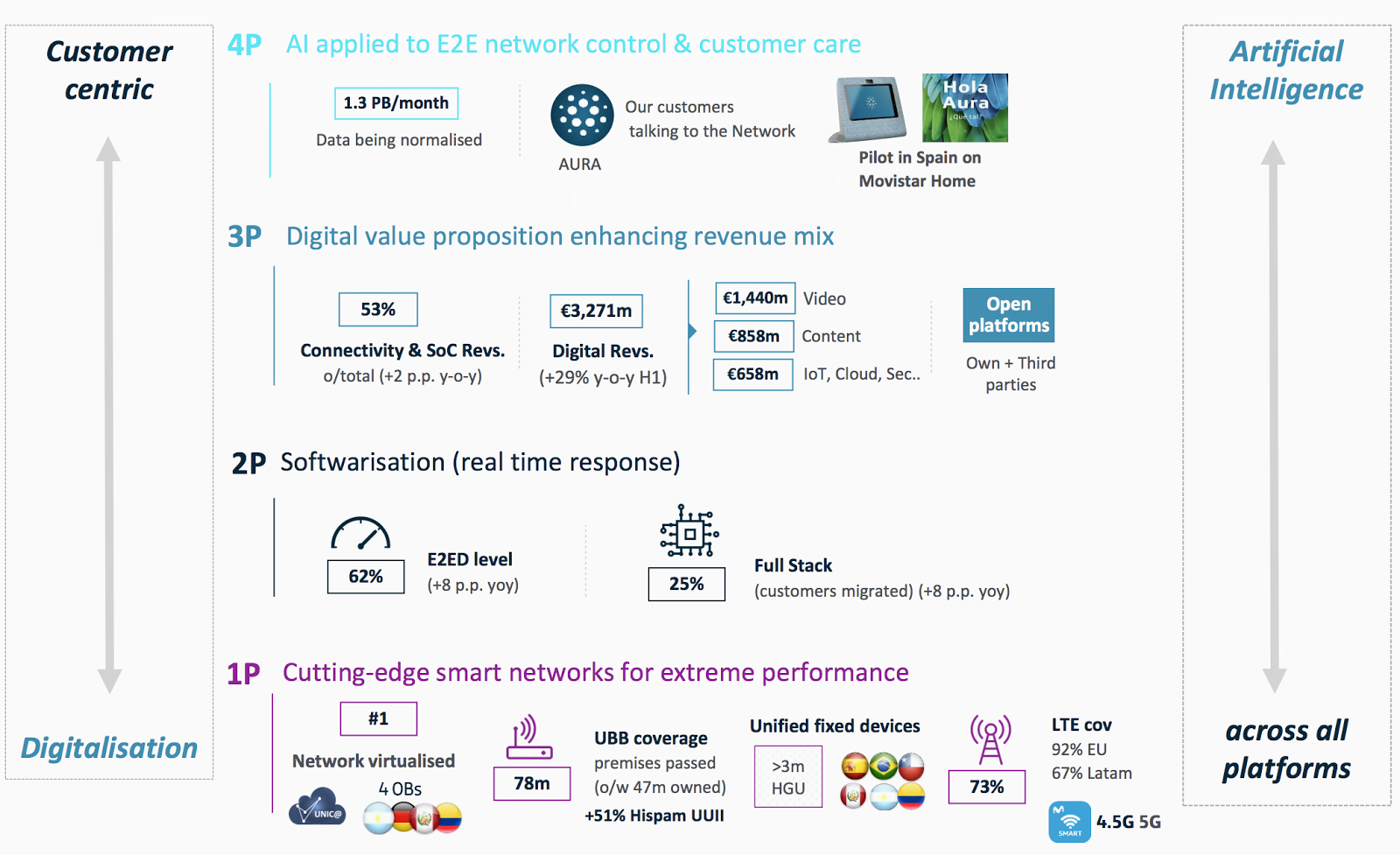 José María Álvarez-Pallete, Executive Chairman, said: "We continue investing and expanding our ultra broadband networks. As of June, we have 47.3 million premises passed with proprietary FTTx/cable network, (+15% year-on-year), LTE coverage grew by 6 percentage points to an average 73% in all our footprint. Lastly, we remain convinced that the key levers to a sustainable digital future lie with our capacity to radically transform our networks, create a customer-centric digital ecosystem, establish digitalisation as the cornerstone for generating efficiencies and remain at the vanguard of cognitive intelligence." source: Telefónica statement

Facebook reported its revenue in the second quarter rose 38% year-on-year to 13.2 billion US dollars, on a constant currency basis. Noting that total revenue growth rate decelerated approximately seven percentage points in the second quarter compared with the first quarter, CFO David Wehner forecast that revenue growth rates will decline quarter-on-quarter by high single digit percentages in both the third and fourth quarters.

"There are several factors contributing to that deceleration," he said. "For example, we expect currency to be a slight headwind in the second half versus the tailwinds we have experienced over the last several quarters. We plan to grow and promote certain engaging experiences like Stories that currently have lower levels of monetisation. We are also giving people who use our services more choices around data privacy which may have an impact on our revenue growth."

However, Facebook did say that 2.5 billion people worldwide used one of its applications in June. "This is our best estimate of our de-duplicated audience across Facebook, Instagram, Messenger, and WhatsApp," added Wehner. "We believe this number better reflects the size of our community and the fact that many people are using more than one of these services." Source: Facebook earnings call transcript
No comments:

Alphabet, owner of Google, reported a 23% year-on-year rise in revenues for the second quarter to 32.7 billion US dollars on a constant currency basis. Although the average fee advertisers on Google Properties paid per click fell 22% year-on-year, the number of clicks rose 58%. "In terms of dollar growth, results were led again by mobile search with strong contributions from both YouTube and desktop search," said Ruth Porat, CFO of Alphabet.

Capex leapt by 139% to 12.78 billion dollars in the first six months of 2018, as Alphabet invests in YouTube, cloud computing capacity and machine learning. Sundar Pichai, CEO of Alphabet, outlined the impact of machine learning on Google's apps, such as Google Maps: "Through our improvements in machine learning, we have seen a 25x increase in our ability to build maps algorithmically, and we have added 110 million algorithmically drawn buildings to Maps, since the beginning of this year. And with over 1 billion users, we’re continuing to see tremendous growth in maps with especially strong growth in countries like Indonesia, India and Nigeria, each of which are growing over 50% year-on-year." Source: Google statement and earnings call transcript

Ericsson forecast the radio access network (RAN) equipment market will decline by 2% for full-year 2018, but will achieve a 2% compound annual growth rate for the period between 2017 and 2022. "In 2018, the Chinese market is expected to decline due to reduced LTE investments, while there is positive momentum in North America," Ericsson added.

Ericsson reported a 1% year-on-year fall in sales for the second quarter on an organic basis to 49.8 billion Swedish krona (5.6 billion US dollars). "We have good market traction in networks, with a sales growth of 2%, particularly in North America where all major operators are preparing for 5G," Ericsson said. Source: Ericsson statement
No comments:

Netflix forecast that revenues will increase by 34% year-on-year in the current quarter, following a rise of 40% in the second quarter to 3.9 billion US dollars. The company reported that streaming revenue rose 43%, driven by a 26% increase in average paid memberships and a 14% rise in average selling prices.

Netflix said: "We had a strong, but not stellar, Q2, ending with 130 million memberships. Membership growth was 5.2 million, the same as Q2 last year, but lower than our 6.2 million forecast. .. we are starting to lead artistically in some categories, with our creators earning enough Emmy nominations this year to collectively break HBO’s amazing 17-year run." source: Netflix statement
No comments: