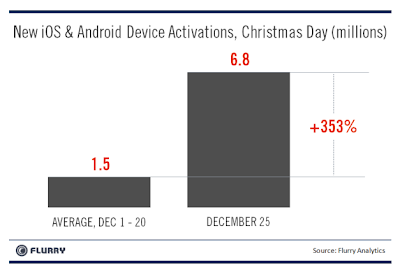 In 2011, Apple’s App Store is on pace to exceed 10 billion downloads, which will double the cumulative number of downloads earned across 2008, 2009 and 2010, according to Flurry Analytics. Android Market reached more than 10 billion cumulative downloads in December, up from three billion in May, Flurry said. source: Flurry blog entry
No comments:

RIM said it expects its revenue for the quarter ending March 3, 2012  to be between 4.6 billion and 4.9 billion US dollars on the back of BlackBerry smartphone shipments of between 11 million and 12 million units. Revenue in the equivalent quarter last year was 5.6 billion dollars and BlackBerry shipmentrs were 14.9 million.

RIM's co-CEOs said: “RIM continues to have strong technology, unique service capabilities and a large installed base of customers, and we are more determined than ever to capitalize on our strengths to overcome the recent execution challenges surrounding product launches and the resulting financial performance." source: RIM statement
No comments:

Device manufacturers shipped 18.1 million media tablets into the channel in the third quarter, according to analyst firm IDC. That represents an increase of 264.5% from the same quarter last year, but is 5.8% below IDC's original forecast of 19.2 million units.

IDC said Apple had a 61.5% worldwide market share (down from 63.3% in the second quarter).  Samsung was number two with 5.6% and HP third with 5%. Barnes & Noble took the number four spot with a 4.5% market share. ASUS rounded out the top five with a 4% share. source: IDC statement
No comments:

However, the Ontario-based company warned that adjusted revenue in the quarter, excluding a charge against revenue of approximately 50 million US dollars related to the service outage that occurred in the quarter, is expected to be slightly lower than the previously guided range of between 5.3 billion and 5.6 billion dollars, "reflecting product mix and the impact of PlayBook sell-through programs in the quarter." In the equivalent quarter last year, RIM's sales were 5.5 billion dollars.

RIM said it is still in the process of finalizing its outlook for the current quarter, but based on preliminary estimates, RIM expects unit shipments in the fourth quarter to be below third quarter levels. source: RIM statement
No comments: