“More people joined Prime this quarter than ever before, and we now have over 150 million paid Prime members around the world,” said Jeff Bezos, Amazon CEO. "The number of items delivered to U.S. customers with Prime’s free one-day and same-day delivery more than quadrupled this quarter compared to last year... Prime members watched double the hours of original movies and TV shows on Prime Video this quarter compared to last year.” source: Amazon statement
No comments:

Tesla reported a 2% year-on-year rise in revenues for the fourth quarter to 7.38 US dollars,  as deliveries of its Model 3 car leapt 46% to 92,620. Tesla said: "Revenue growth was offset by higher lease mix, Model 3 becoming a larger part of our mix, introduction of the Standard Range trims of Model 3, and adjustments to vehicle pricing. These changes have resulted in a reduction to the average selling price (ASP) relative to 2018. We do not expect ASP to change significantly in the near term, which means volume growth and revenue growth should correlate more closely this year."

"We are positioned to accelerate our revenue growth further through increasing build rates in Gigafactory Shanghai and our Model Y production line in Fremont. These production increases will allow for higher total vehicle deliveries and associated revenue."

Tesla said its customers vehicles have now driven over three billion miles in "Autopilot mode", adding more data to the neural net it is using to develop self-driving capabilities. "All Tesla vehicles with our FSD computer have been updated with new software that can better detect new details in their environments, allowing us to show various lane markings, traffic lights, stop signs, cones as well as other vehicles and road users. Understanding the environment around a Tesla is key to enabling our cars to react to traffic lights and stop signs and take intersections through city streets. We are currently validating this functionality before releasing to customers, and we look forward to its gradual deployment."

In the fourth quarter, Tesla launched premium vehicle connectivity in the US for 10 dollars (plus tax) per month, which customers can use to stream music or videos, browse the Internet or see live traffic through an embedded connection. Source: Tesla statement
No comments:

Apple forecast it will generate revenue of between 63 billion and 67 billion US dollars for the quarter ending March 30th, compared with 58 billion dollars in the same quarter of last year. That would represent year-on-year growth of between 9% and 16%.

For the quarter ending December 28, 2019, Apple posted quarterly revenue of 91.8 billion US dollars, an increase of 9% from the year-ago quarter. International sales accounted for 61% of the quarter’s revenue. Revenue from iPhones rose 8%, while revenue from wearables, home and accessories climbed 37%.

Tim Cook, Apple’s CEO, said: “During the holiday quarter our active installed base of devices grew in each of our geographic segments and has now reached over 1.5 billion." Source: Apple statement 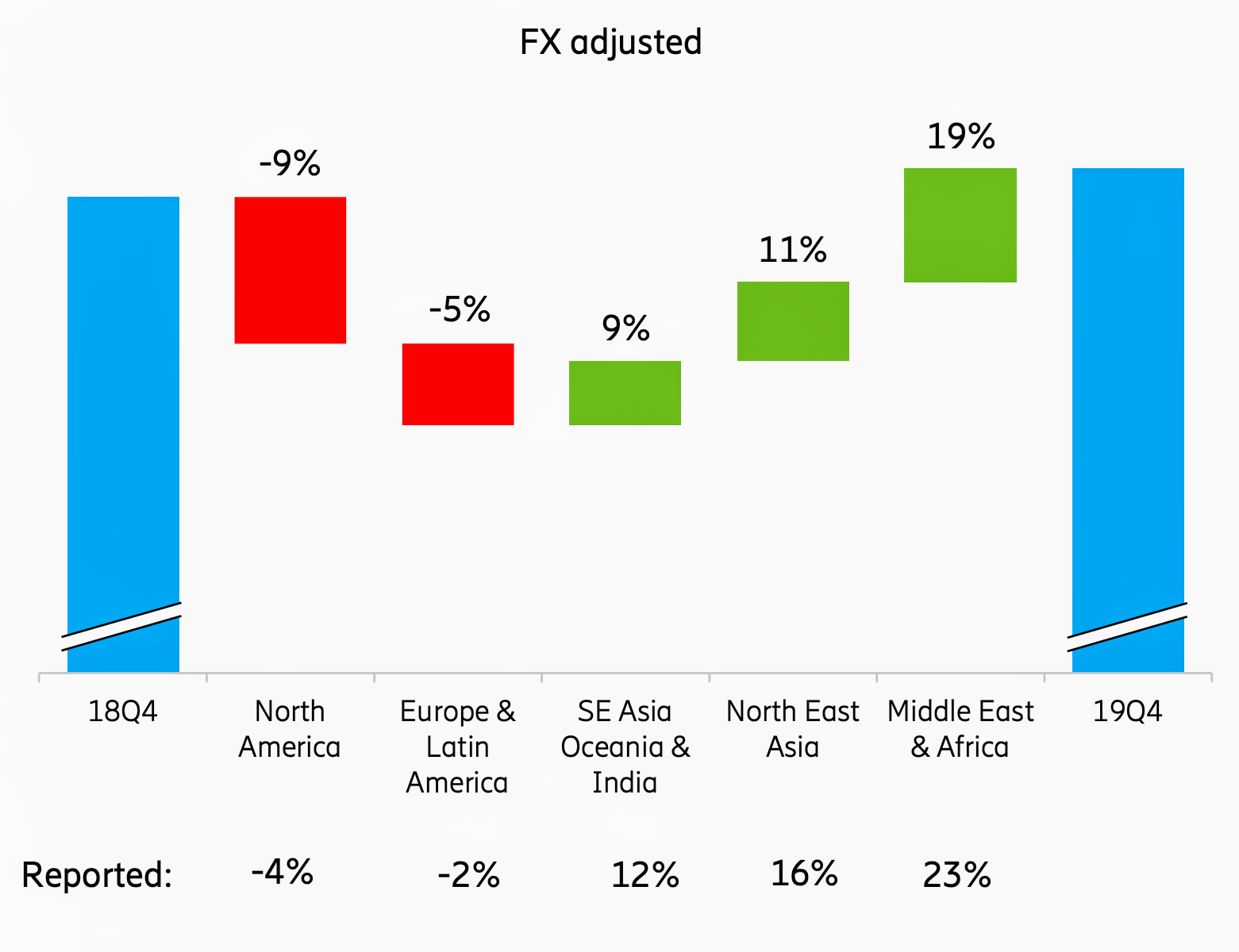 Ericsson reported a 1% year-on-year rise in revenues on a like-for-like basis for the fourth quarter of 2019 to 66.4 billion Swedish krona (6.9 billion US dollars). The telecoms equipment maker said a fall in sales in North America was compensated for by growth in other markets, primarily in the Middle East and North East Asia.

Börje Ekholm, CEO of Ericsson, said: "We have regained technology leadership, recovered previously lost ground in several markets... we are a leader in 5G with 78 commercial 5G agreements with unique operators and 24 live 5G networks on four continents. .... Due to the uncertainty related to an announced operator merger, we saw a slowdown in our North American business in the fourth quarter, resulting in North America having the lowest share of total sales for some time. However, the underlying business fundamentals in North America remain strong. .. It is still too early to assess possible volumes and price levels for the expected deployment of 5G in China, and we expect that the initial challenging margins will shift to positive margins over the lifespan of the contracts." source: Ericsson statement
No comments:

Netflix forecast year-on-year revenue growth of almost 27% for the first quarter of 2020, after raising revenues by almost 31% in the final quarter of 2019 to 5.47 billion US dollars. It added 8.8 million paying subscribers in the quarter, approximately the same figure as a year earlier.

Netflix said: "We generated Q4-record paid net adds in each of the EMEA, LATAM and APAC regions, while UCAN (United States and Canada) paid net adds totalled 550,000 (with 420,000 in the U.S.) versus 1.75 million in the year ago quarter. Our low membership growth in UCAN is probably due to our recent price changes and to U.S. competitive launches. We have seen more muted impact from competitive launches outside the U.S.." source: Netflix statement
No comments:

Tesla Steps Up Production and Deliveries

The new Model 3 accounted for 83% of the vehicles it produced. Tesla also said its new Shanghai factory, which broke ground less than a year ago, has already produced almost "1,000 customer salable cars." Source: Tesla statement
No comments: