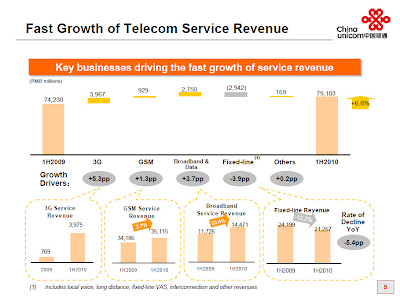 China Telecom said its operating revenue rose 4.9% year-on-year in the first half of 2010 to 107.55 billion Chinese yuan (15.8 billion US dollars), as its mobile subscribers leapt 18% to 74.5 million and its wireless broadband subscribers climbed almost 5% to 58 million.

China Telecom said it had "invigorated its "terminal supply chain" and now has 700 CDMA handsets models "in supply", including more than 100 3G handset models. 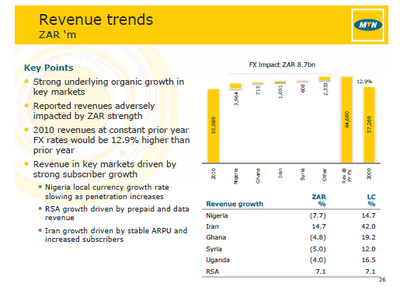 Pan-Africa and Middle East mobile operator MTN said, in constant currencies, its group revenues rose 12.9% year-on-year in the first half of 2010, as group subscribers climbed 11.4% to 129.2 million. Hit by adverse currency movements, reported revenue fell 2.2% to to 55.99 billion rand (7.62 billion US dollars).

China Mobile said its Mobile Market app store, launched in August 2009, "has achieved rapid growth, with over 50,000 registered developers, 20,000 applications available, and over 25 million application downloads by the end of June 2010." The Beijing-based operator said it now has more than 5 million M2M (machine-to-machine) customers, representing an annual growth rate of more than 60%.

In the first half, the company's capex fell slightly to 61.5 billion yuan. China Mobile said it now has 505,000 GSM base stations and its "base station optic fiber access rate reached 96%". At the end of June, its 3G network (TD-SCDMA) had 115,000 operational base stations, covering 238 cities. source: China Mobile statement
No comments: 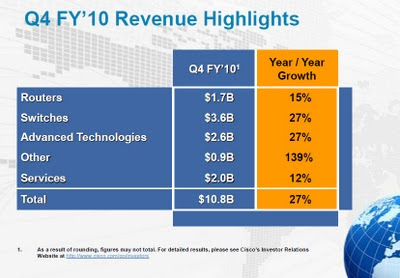 Cisco said that its net sales rose 27% year-on-year in the quarter ending July 31 to 10.8 billion US dollars, propelled by 27% growth in its "advanced technologies" sales and 27% growth in "switching revenue". In the year ending July 31, Cisco's revenues rose 11% to 40 billion dollars.

However, the company cautioned: "We are seeing a large number of “mixed signals” in both the market and from our customers’ expectations…we think that the words “unusual uncertainty” are an accurate description of what is occurring." source: Cisco presentation
No comments:

Ericsson said that its measurement of actual traffic in networks around the world shows that global mobile data traffic has nearly tripled in the past year, growing more than 10 times as fast as voice. However, mobile broadband still accounts for only 10% of total mobile subscriptions worldwide, the Stockholm-based company added.

According to Ericsson, "global measured mobile data traffic" was nearly 225,000 terabytes per month during the second quarter of 2010. Ericsson also said it has now delivered two million base stations (out of an industry-wide installed base of five million). source: Ericsson statement
No comments:

Bharti Airtel, India's leading mobile operator, said its revenues in the quarter ending June 30 rose 17% year-on-year to 2.63 billion US dollars, boosted by 23 days of revenues from its newly-acquired operations in Africa. Lifted by a 36% rise in customers to 141 million, the company said that its revenues in India and South Asia were 2.42 billion dollars, a rise of 8.2% year-on-year.

Following the acquisition of most of Zain's African operations, Bharti said it had almost 119,000 network sites at the end of the quarter compared with less than 108,000 at the end of March, while its number of employees jumped from about 18,000 to almost 25,000. source: Bharti statements
No comments:

About 40% of Skype Calls are Video

Skype said its 124 million "connected users" placed 95 billion calling minutes over Skype in the first half of 2010, approximately 40% of which were video. source: Skype statement

Dow Jones Newswires reported that in the second quarter, Skype's average paying users increased 23% year-on-year to 8.1 million and, in the first half, its revenue rose 25% year-on-year to 406 million US dollars. source: Total Telecom/Dow Jones
No comments:

Hit by declining sales in the Italian market, Telecom Italia said that its revenues fell 5.3% year-on-year, on an organic basis, to 6.81 billion euros in the second quarter. But in its Brazilian unit, sales rose 2.1% in the first half of 2010 on an organic basis.

Telecom Italia said it is seeing a "steady and continued recovery" in organic service revenues, which declined 3.4% year-on-year in the second quarter of 2010, following a decline of 4.1% in the first quarter and 6.2% in the fourth quarter of 2009.

The Rome-based operator forecast that its organic revenues will fall by between 2% and 3% in 2010, while capex for the full year is set to come in at 4.3 billion euros, compared with 4.54 billion in 2009. source: Telecom Italia statement
No comments:

Hutchison Whampoa said that revenue at its 3 Group, which comprises its 3G mobile operations in Europe and Australia, rose 7% in local currencies to 29.859 billion Hong Kong dollars (3.85 billion US dollars) in the first half of 2010. 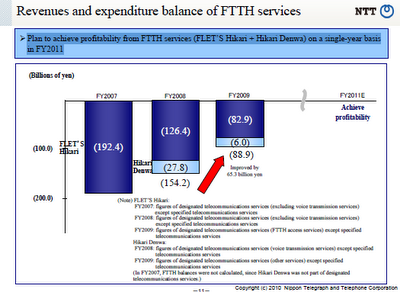 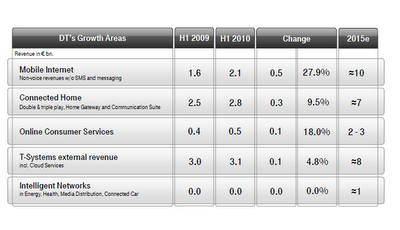 Deutsche Telekom said that its net revenue in the second quarter fell 1.8% year-on-year to 15.53 billion euros on an organic basis, excluding the impact of currency movements and the contribution of T-Mobile UK, which has been spun off into a joint venture with Orange UK.

Oi of Brazil said its consolidated net revenue rose 1.3% year-on-year in the second-quarter to 7.39 billion Brazilian reals (4.22 billion US dollars), shored up by rising sales of mobile broadband services.

Japanese mobile operator SoftBank said that its net sales increased by 5% year-on-year in the quarter ending June 30th to 700.8 billion yen (8.11 billion US dollars), boosted by a 8% rise in mobile communications revenues.

Aiming to double its number of base stations in Japan to 120,000, SoftBank said that it plans to spend 400 billion yen on capex in the year ending March 31st 2011, up from 222.9 billion yen in the previous year. source: SoftBank presentation
No comments: 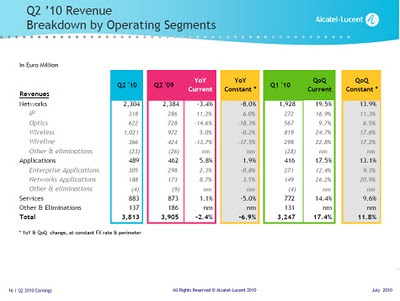 Alcatel-Lucent said its revenues fell 6.9% year on year on a like-for-like basis in the second quarter to 3.81 billion euros, as modest growth in its IP and applications businesses failed to fully offset double-digit declines in optics and wireline units.

Alcatel-Lucent said it continues to expect nominal growth (defined as between 0% and 5%) for the telecommunications equipment and related services market in 2010. source: Alcatel-Lucent presentation
No comments: