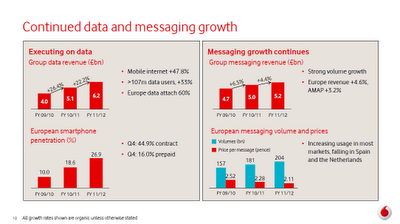 Vodafone said its revenue rose 2.8% on an organic basis year-on-year to 11.28 billion British pounds in the quarter ending March 31. In the year to March 31, total group revenue was up 2.2% to 46.42 billion British pounds (73.24 billion US dollars), with service revenues up by 1.5%.  Revenue in India rose 19.5% and in Turkey 25.1% over the year, but service revenue in Europe fell 1.1% as regulators cut mobile termination rates.

The Newbury-based group said messaging usage continued to rise in most markets, except for Spain and the Netherlands, adding: "We have made good progress on integrated tariffs, which combine allowances for voice, SMS and data in one monthly fee. In Q4, 43.2% of consumer contract revenue in Europe was from customers on integrated tariffs. This gives us improved visibility of revenue and reduces our exposure to customers using data bundles to substitute voice and SMS usage." source: Vodafone presentation
No comments: 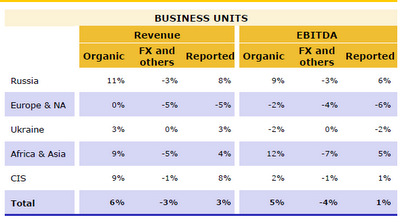 Amsterdam-based telecoms group VimpelCom said its revenues rose 6% year-on-year on an organic basis  in the first quarter to 5.6 billion US dollars, as its total mobile subscriber base rose by 12% to 209 million. In Russia, revenues were up 11% year-on-year, but fell slightly in Italy as a result of cuts in mobile termination rates.  Revenues rose 7% in Algeria,10% in Pakistan and 19% in Bangladesh. source: VimpelCom presentation
No comments: 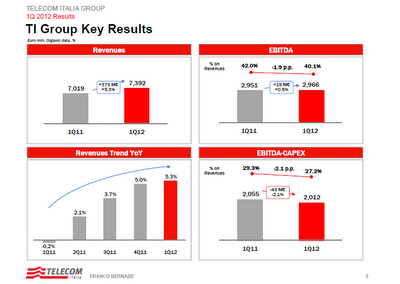 Telecom Italia said its revenues increased 5.3% year-on-year on an organic basis in the first quarter to 7.39 billion euros. A 19% increase in revenues in Brazil and a 24% increase in Argentina more than offset a decline of 2.4% in Italy.

In Brazil, Telecom Italia increased its postpaid connections 25% year-on-year and saw its revenues from value-added services rise more than 60%  as smartphone penetration rose to 31% from 13% a year earlier.  In Argentina, ARPU rose 16% driven by strong growth in SMS and Internet revenues. source: Telecom Italia presentation
No comments:

César Alierta, executive chairman, said: "In Spain, we pioneered the elimination of handset subsidies for new customers, taking a significant step towards a far-reaching transformation of the commercial structure of the market. This move, alongside the agreement reached with Mozilla to develop smartphones based on the open HTML5 system and the increased drive towards integrated tariffs and tiered pricing are clear examples of our strategy to transform the business model within the new digital environment. Additionally, Telefónica Digital is already delivering new innovative services adapted to the new usage patterns of our customers."

He added that he expects Telefonica's performance to accelerate "noticeably in the second half" and the group reiterated its earlier financial and operational guidance for 2012. 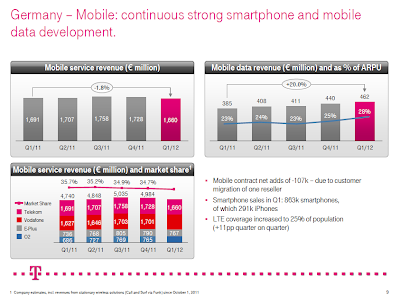 Deutsche Telekom said that its group revenue fell 1.7% year-on-year on an organic basis in the first quarter of 2012 to 14.4 billion euros. Revenue declined 2.3% in Germany, 0.7% in the rest of its European operations and 2.3% in the U.S.. Its systems solutions business increased external revenues by 0.6% to 1.63 billion euros.

A rise in mobile data revenues failed to offset a fall in voice and SMS revenues in Germany. But Deutsche Telekom's Entertain television service added 173,000 customers in the quarter taking the total to 1.725 million. The Bonn-based telco also said that it increased LTE coverage in Germany to 25% of the population - an increase of 11 percentage points during the quarter. source: Deutsche Telekom presentation
No comments: 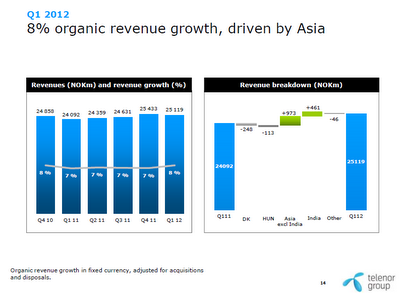 Multinational operator Telenor said that its revenues rose 7.6% year-on-year, on an organic basis, in the first quarter of 2012 to 25.12 billion Norwegian krone (4.31 billion US dollars), as it added 5.6 million new subscribers in the quarter. Excluding India, where Telenor's license is in jeopardy, the group's Asian operations recorded organic revenue growth of 14%.

In Bangladesh and Pakistan, organic growth was over 12% and in Pakistan, Telenor's revenues grew 23%  and in India, sales more than doubled.

The Oslo-based group maintained its forecast that revenues will grow at least 4% on an organic basis in 2012, excluding India. It is also predicting that capex will be between 10% and 12% of revenues. source: Telenor presentation
No comments: 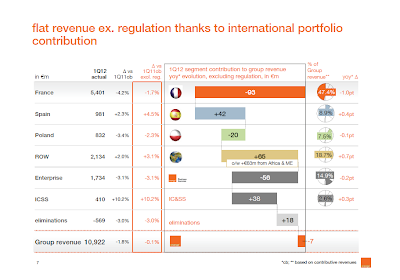 France Telecom-Orange said its revenues fell 1.8% on a comparable basis in the first quarter of 2012 to 10.92 billion euros. It blamed regulation for most of that fall, but revenues in its home mobile market were also dragged down by competition from Free, a new entrant.

Capital spending in the first quarter was up 2.2% year-on-year to 1.07 billion euros, as the group said it is accelerating LTE investments in France - the first pilot (in Marseilles) is scheduled to go live in June 2012. source: FT-Orange presentation
No comments:

Bharti Airtel, India's leading mobile operator, said its revenues rose 15% year-on-year in the quarter ending  March 31 to 3.72 billion US dollars. Revenues in India and South Asia were up 10.5%, while revenues in Africa climbed 15.9%.

In a statement, Sunil Bharti Mittal, chairman and managing director of Bharti, said: “I am pleased that the [financial] year has ended with the company’s customer base crossing 250 million across twenty countries, the twentieth country being Rwanda. Our launch of 4G LTE, the first in India, is testimony to our commitment to the broadband agenda. The recent regulatory developments in India will have significant implications on the future of telephony and broadband, as well as India’s global competitiveness. The entire industry looks to the government for a fair, transparent and sustainable telecom regime.”

Bharti reported that its return on capital employed fell to 7.2% in the year ending March 31 compared with 10.8% the previous year and 20.7% the year before that.

Bharti said it recently launched 4G services in Kolkata, based on TD-LTE technology. It also provides 3G services "in key cities of the country offering a host of innovative services to our customers like Mobile TV, video calls, live streaming of videos, gaming, along with access to high speed internet." In the quarter ending March 21, Bharti also launched Airtel Money, a person to person (P2P) money transfer service, across India.

But Bharti said that its capex in the quarter was just 473 million US dollars, compared with 1 billion dollars in the same quarter of the year before. It now has more than 141,000 base stations across 20 countries compared with 131,000 a year earlier. source: Bharti statements
No comments: