Nokia said its Series 40 software, used to run feature phones, is the largest mobile platform in the world by volume, with more than half a billion "Nokia Series 40 mobile phones in consumers' hands today."

Nokia added that there has been more than 35% growth in the number of app downloads to Series 40 phones in the past two months, and now make up about a quarter of the total downloads from Nokia's Ovi Store. source: Nokia statement
No comments:

Research In Motion, maker of the BlackBerry, expects its revenue for the quarter ending August 27, 2011 to be between 4.2 billion and 4.8 billion US dollars, compared with 4.62 billion dollars in the same quarter last year.

“Fiscal 2012 has gotten off to a challenging start. The slowdown we saw in the first quarter is continuing into Q2, and delays in new product introductions into the very late part of August is leading to a lower than expected outlook in the second quarter." said Jim Balsillie, Co-CEO at Research In Motion.

Fixed Traffic To Rise Fivefold by 2015 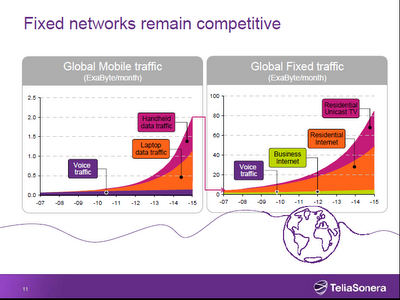 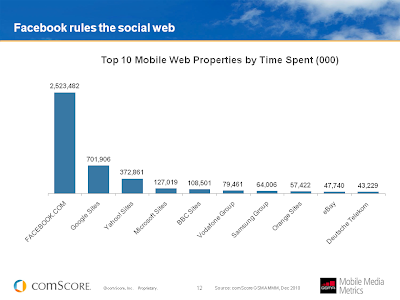 Launching its iCloud service, Apple said it has sold more than 200 million devices running its iOS operating system, including 25 million iPads (up from 15 million at the beginning of March). Apple said its App Store now has more than 425,000 applications that work with iOS. source: Bloomberg article
No comments:

France Telecom to Invest in Growth

France Telecom said it is aiming to achieve compound annual revenue growth of 0.6% in the period from 2011 to 2013. During that timeframe, the group expects to spend around 18.5 billion euros in capex, including 1 billion euros for fiber deployment in France.  In the 2013 to 2015 "conquest phase", France Telecom expects compound annual revenue growth of 2.7% and capex to fall from 12% of revenues to 11% of revenues.

Stéphane Richard, Chairman and CEO of France Telecom-Orange, said: “Our Conquests 2015 business plan now moves into an adaptation phase that is preparing the ground for a subsequent, even more decisive conquest phase..... we will be able to capitalize on a number of positive factors between now and 2015. These include the economic outlook in the countries in which we operate, an increasingly favorable regulatory environment, the quality of our networks, strategic new growth opportunities that we have identified, as well as our new strategy for building partnerships with other players in the digital ecosystem.” source: France Telecom statement
No comments:

Nokia, the world's leading mobile phone maker, said it now expects net sales in its Devices & Services division "to be substantially below its previously expected range of 6.1 billion to 6.6 billion euros for the second quarter of 2011. In the second quarter of 2010, the division's revenues were 6.8 billion euros. Nokia blamed lower-than-expected average selling prices and mobile device volumes, resulting from "the competitive dynamics and market trends across multiple price categories, particularly in China and Europe."

Nokia said it is continuing to invest to bring new capabilities to its Symbian smartphone line up and "has taken price actions on its current smartphone portfolio, and is intensifying its focus on retail point-of-sales marketing." The Finland-based company added that it has now begun shipping dual-SIM devices and "has increased confidence that the first Nokia product with Windows Phone [software] will ship in the fourth quarter 2011." source: Nokia statement
No comments: