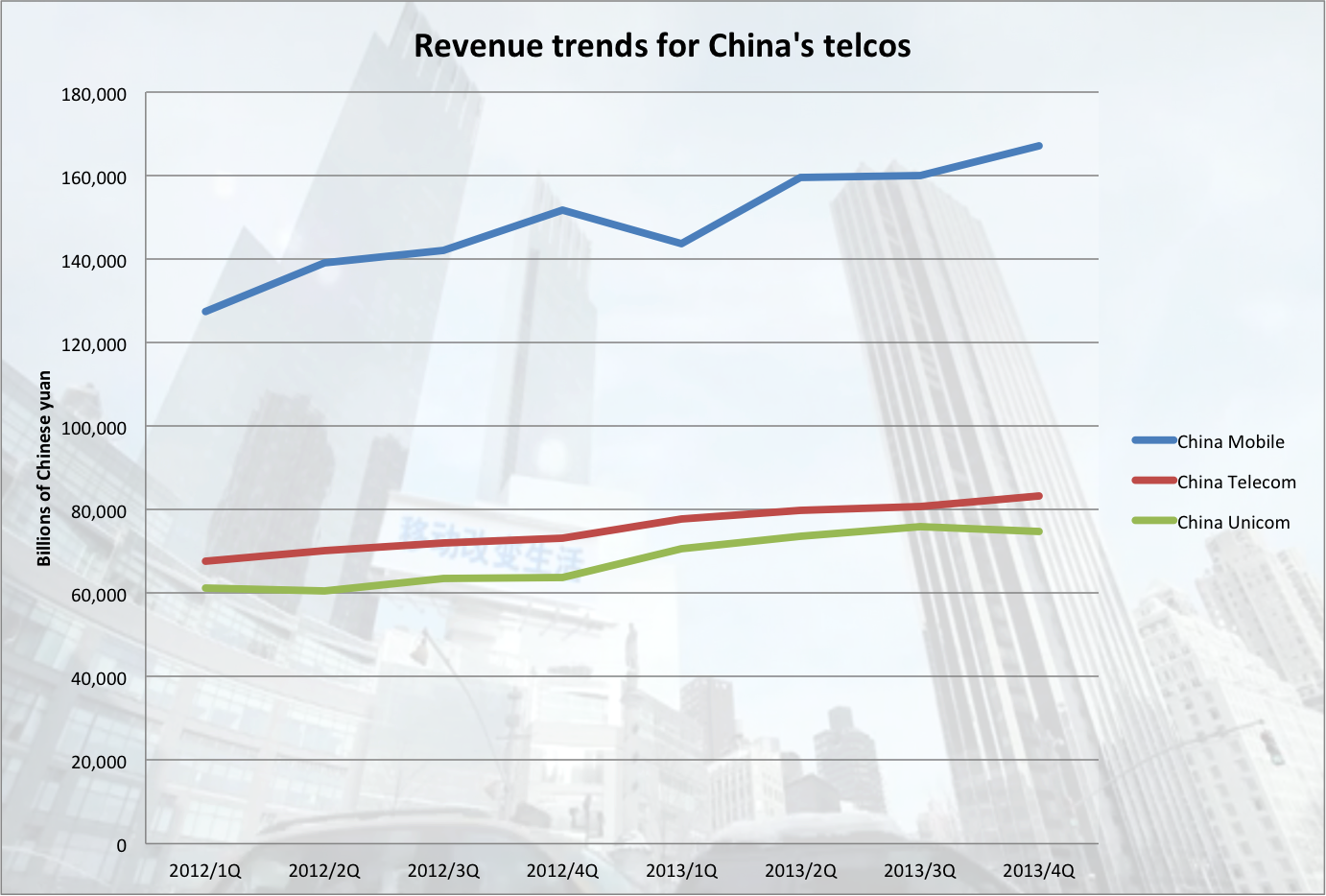 Despite being saddled with a non-standard 3G technology, China Mobile has widened the gap between it and its two main rivals over the past two years. China Mobile's quarterly operating revenue topped 26.9 billion US dollars in the fourth quarter of 2013, while China Telecom and China Unicom generated about half that each.
No comments: 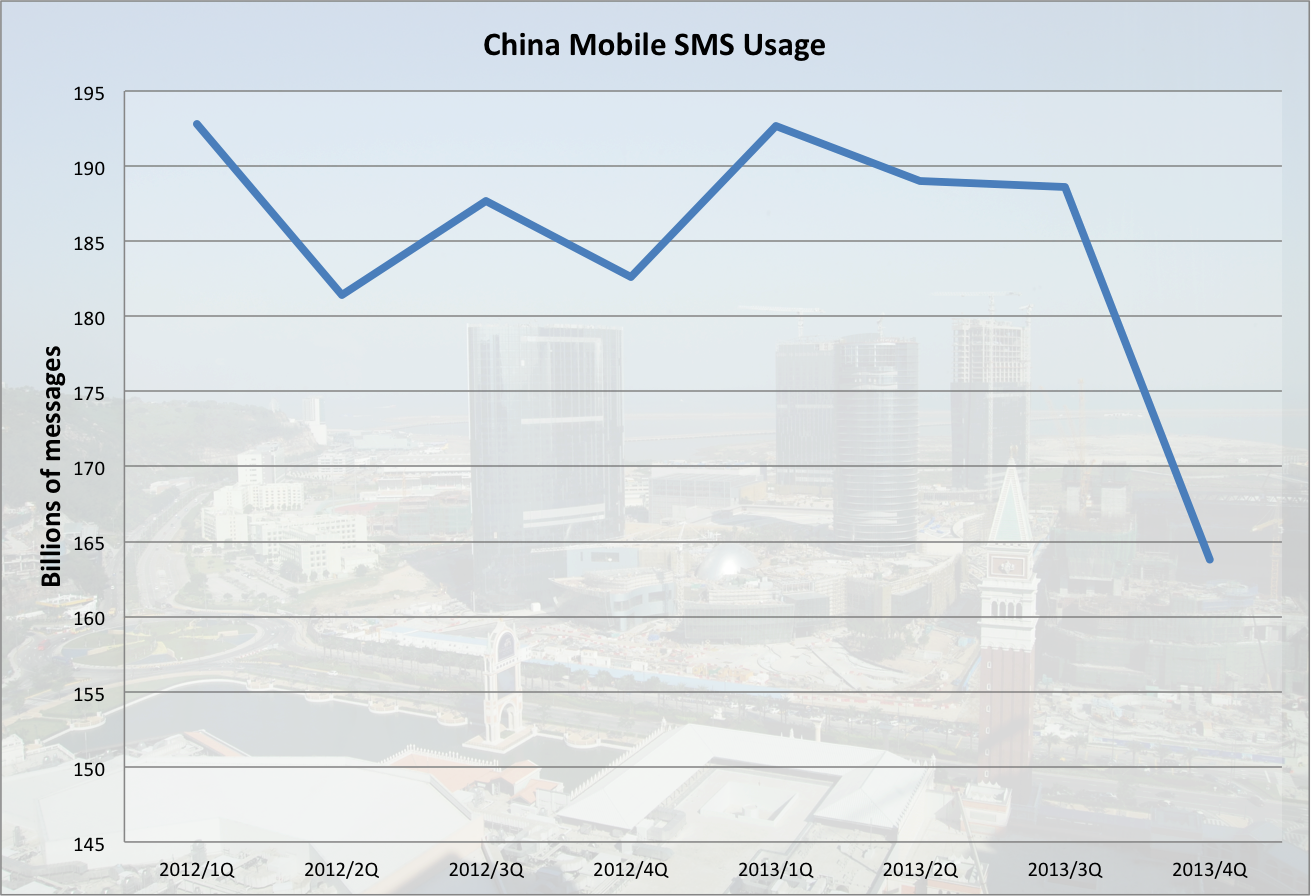 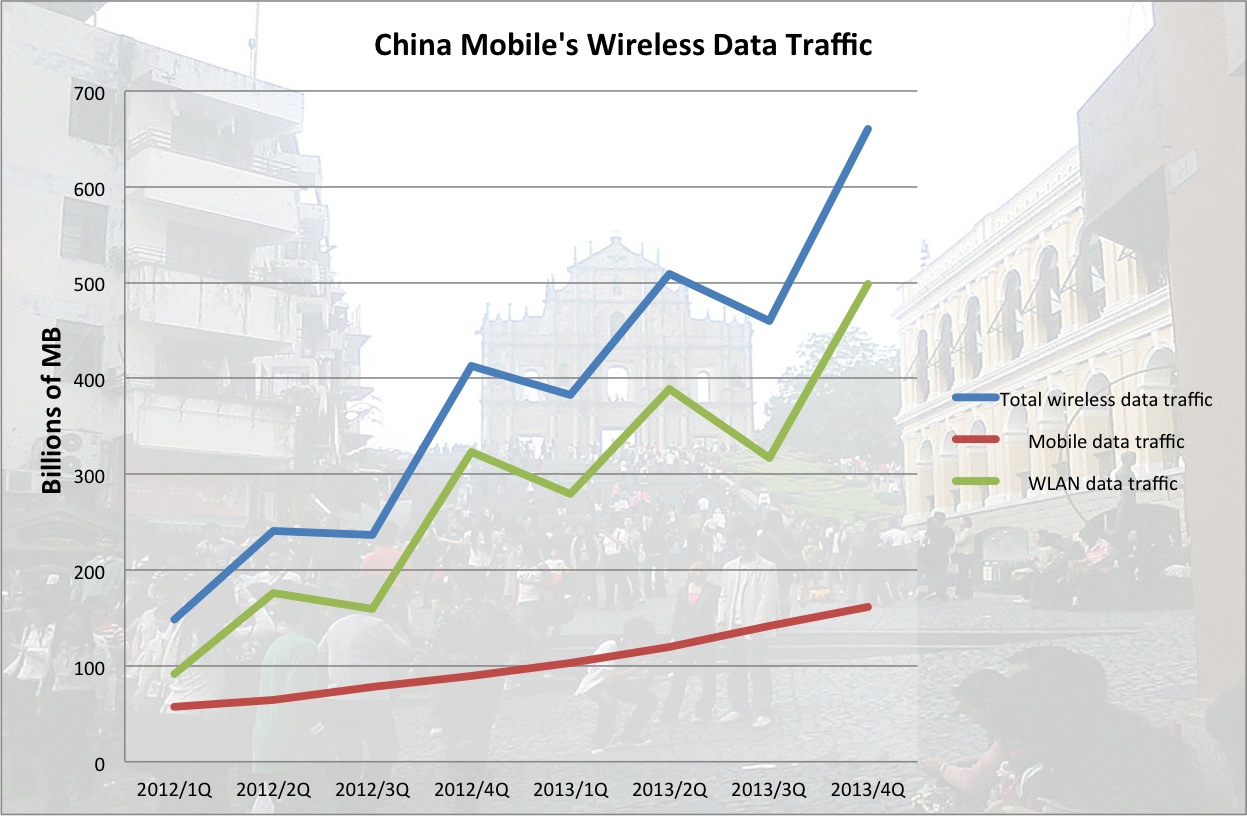 China Mobile said it plans to increase its capex by almost 22% in 2014 to 225.2 billion Chinese yuan (36.16 billion U.S. dollars). A rapid deployment of 4G mobile networks is the main driver behind the planned increase. China Mobile said: "It was particularly encouraging for the company to be granted a 4G (TD-LTE) license in December 2013. ..The company is determined to spare no effort to build a superior 4G network, aiming to become the world’s largest 4G network with 500,000 base stations that will essentially deliver continuous coverage in all cities, urban areas of counties and key villages by the end of 2014." China Mobile has 446,000 TD-SCDMA (3G) base stations and 881,000 GSM base stations today.

China Mobile reported a 8.3% increase in operating revenue in 2013 to 630.18 billion yuan, but telecoms service revenue rose a more modest 5.4%. Revenues from applications and information services was 9.7% of total revenue, up from 9.6% in 2012. source: China Mobile presentation
No comments: Since 2010, EE, the U.K. joint venture between Orange and Deutsche Telekom has successfully increased its contract customer base, but has shed prepaid customers even faster. It total customer base has shrunk by more than two million in the past four years. The net result has been a gradual decline in revenue, but an increase in "adjusted EBITDA"  source: Orange annual results Nearly 97 percent of data traffic worldwide was generated by fixed access networks at the end of 2013, with the remainder mobile, according to a report from Analysys Mason.  The average fixed broadband connection globally is generating 52GB a month today (excluding multicast), according to the research firm. In the U.S., that figure is 102GB today. source: Telecompaper article
No comments: Africa and Middle East mobile operator MTN said its revenue increased 3.1% on a constant currency basis in 2013 to 136.5 billion South African rand (12.65 billion US dollars), boosted by a 9.8% increase in group subscribers to almost 208 million. However, revenues grew 8.5% in 2012 on an organic basis. For 2013, MTN reported a 41% increase in data revenue to 20.7 billion rand, but data still only accounts for 15% of group revenue.

MTN said it spent 30.16 billion rand on capex in 2013 up 5%, on the year before. For 2014, it has allocated 26.15 billion rand for capex and plans a major reduction in spending in Nigeria. MTN forecast that it will add another 16 million subscribers in 2014. source: MTN presentation
No comments:

Deutsche Telekom said it expects group revenues to rise slightly in 2014, after it reported a 0.8% rise, in organic terms, for 2013. In the fourth quarter, organic revenues rose 2.8% driven by a strong performance by T-Mobile USA. Although Telekom's mobile service revenues fell 1.8% in Germany, it claimed to have gained market share in its home market, as well as the U.S..

Deutsche Telekom said it invested 8.9 billion euros in 2013, not including expenses for mobile spectrum totaling 2.2 billion euros. "That is 10.5% more than the previous year," it said. "In the current year, the group will again forge ahead with its investment drive in the fixed network and mobile communications."

T-Mobile USA's service revenue climbed 25% in the fourth quarter driven by a sharp increase in net customer additions. "We could achieve our original ambition level for 2015 of around 6 billion euros (in free cash flow) if we were to slam the door in the face of the customer rush in the United States. That's not what we want. The market is offering us the opportunity to achieve a different ambition: value-driven customer growth in the United States that translates into an increase in the value of the company," said Thomas Dannenfeldt, CFO at Deutsche Telekom. source: Deutsche Telekom statement
No comments:

Orange said its revenues fell 5.1% year-on-year, on a comparable basis, in the fourth quarter of 2013 to 10.22 billion euros. The decline was steeper than the 4.5% fall across 2013 as a whole.  The company said that more than 40% of the revenue decline was due to regulation, while it was also hit by heightened competition in France: Orange reported a 12% year-on-year decline in mobile services in France in the fourth quarter.

Orange said it spent 5.63 billion euros in capex in 2013 - 13.7% of revenues, an increase of 0.4 percentage points compared to 2012 on a comparable basis. The Paris-based company said: "This investment strengthens the Orange Group's position as a leader in the field of telecommunication networks, in particular with investments in high-speed fixed and mobile broadband (4G, fibre and VDSL) which doubled compared to 2012." source: Orange statement
No comments: