Telecoms Capex to Climb in 2011

Capital spending across the global telecoms industry will increase 2.9% in 2011 to 275.7 million US dollars, according to research firm the Yankee Group. source: Yankee Group statement
No comments:

Consumer research by UK regulator Ofcom between September and December 2010 found that 17% of UK households are using mobile broadband to access online services, with 7% using it as their only means of internet access, compared to 3% in 2009.

The research, which looks specifically at the performance of mobile networks using dongles and datacards and does not consider smartphones, found that the average download speed achieved by consumers on mobile broadband networks is 1.5 Mbps and basic webpages took on average 8.5 seconds to download, compared with 6.2 Mbps and an average of less than 0.5 seconds on fixed broadband networks.

Ofcom said that O2, on average, delivered web pages faster than the other four operators and had lower average latency than 3, Orange and Vodafone. Ofcom said: "The slower speed of web page downloading on mobile broadband compared to fixed broadband is largely the result of higher levels of latency. In addition to increasing the time for web page downloads, high latency may make connections less suitable for some online games and VoIP." source: Ofcom statement
No comments: 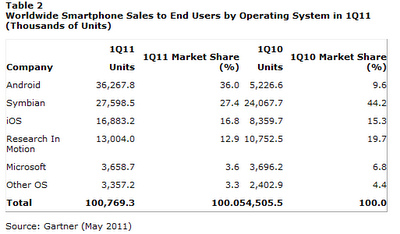 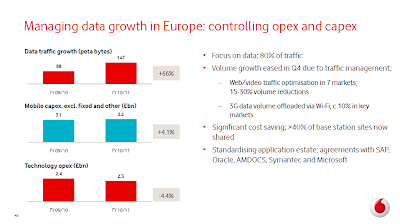 Vodafone reported organic service revenue growth of 11.8% in the quarter in its operations in Africa, the Middle East and Asia-Pacific, supported by "increasing voice penetration and a more stable pricing environment" in India.  However, the U.K.-based group said that its organic service revenue fell 0.8% in Europe in the quarter as declines in southern Europe more than offset growth in Turkey, Germany, the U.K. and The Netherlands.

Vodafone said its smartphone penetration in Europe is now up to 18.7% from 11.6% a year earlier. Some 48% of these smartphone customers are taking some form of data plan, up 6 percentage points year-on-year. Vodafone said the volume growth in data traffic is easing and it expects capital expenditure in the year ending March 31, 2012 to be at a similar level to the previous year. source: Vodafone presentation
No comments: 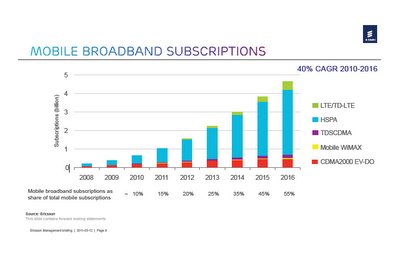 Ericsson said that it is targeting net compound annual sales growth of between 4% and 10% in the period between 2010 and 2013. The Stockholm-based telecoms company also said that it expects mobile broadband subscriptions to grow 40% per annum over the next six years. source: Ericsson presentation.
No comments:

Telefónica said its "mobile accesses reached 223.1 million by the end of the first quarter of 2011, up 8% year-on-year." Spain's largest telecoms company said that "increased tariff segmentation and the availability of a higher range of handsets with more competitive prices across all the segments," enabled it to increase its mobile broadband connections to 26.5 million at the end of March 2011, compared with 16 million a year earlier. The Madrid-based company also said its capex rose 30% to 1.55 billion euros in the first quarter. source: Telefonica statement
No comments:

Less than three years after the launch of the first Android smartphone, Google said that more than 100 million Android devices have now been activated, with 400,000 new Android devices being activated every day. source: Mobile Business Briefing
No comments: 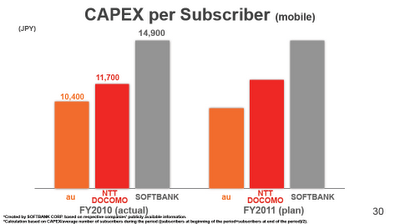 SoftBank, one of Japan's largest telecoms companies, said its sales rose 5% year-on-year in the quarter ending March 31 to 754.74 billion Japanese yen (9.33 billion US dollars). Sales in the mobile communications division climbed 11% to 485.93 billion yen, as SoftBank added another one million mobile connections in the quarter. The company claimed it is spending significantly more capex per subscriber than its rivals. source: SoftBank spreadsheet
No comments: 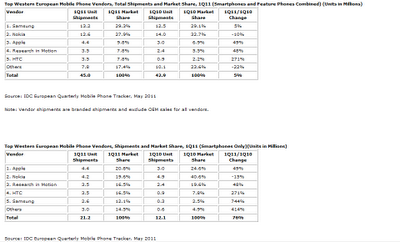 Telecom Italia said that its group revenue declined 0.2% year-on-year on an organic basis to 7.07 billion euros in the first quarter of 2011, as a 7.4% decline in revenues in Italy was mostly offset by a 13.8% increase in revenues in Brazil and a 27.2% rise in revenues in its recently-acquired business in Argentina.

The Italian company said that smartphones accounted for 40% of its handset sales in Brazil compared with 16% in the first quarter of 2010. source: Telecom Italia presentation
No comments:

Deutsche Telekom in the Doldrums 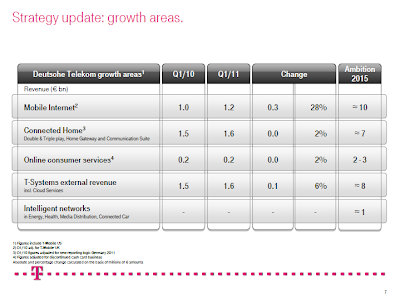 Deutsche Telekom's revenues fell 3.5% year-on-year, on an organic basis, to 14.6 billion euros in the first quarter of 2011, as its sales declined in both Europe and the U.S.  Revenue in Germany was down 3.2% to 6 billion euros as a result of declining voice telephony revenues for both mobile communications and fixed networks.

T-Mobile USA, which is set to be acquired by AT&T, saw is sales slide 2.1% in dollar terms, but service revenues actually climbed 0.4% lifted by strong growth in data revenue and moving the handset insurance business in-house.

Bharti Airtel, India's largest mobile operator, reported a 13% year-on-year rise in revenues in its operations in South Asia in the quarter ending March 31 to 121.2 billion Indian rupees (2.69 billion US dollars), boosted by a 28% rise in customers in the region to almost 168 million. Bharti said that revenues in its recently-acquired African operations, which added 2.1 million customers in the quarter, amounted to 41.82 billion rupees in the three month period.

Bharti said its 131,304 base stations across 19 countries now serve a total of 220.88 million connections. source: Bharti Airtel statement
No comments: 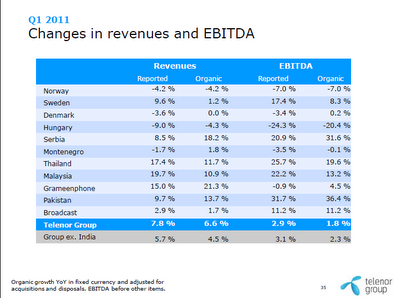 Telenor, which runs mobile networks in Europe and Asia, said that its revenues grew 6.6% year-on-year on an organic basis in the first quarter of 2011 to 24.09 billion Norwegian krone (4.55 billion US dollars), as its subscriber base increased by 9 million in the quarter, compared with a rise of 3.5 million in the first quarter of 2010. source: Telenor presentation
No comments: 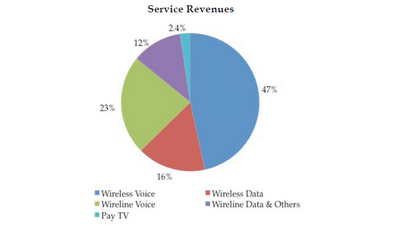 However, the pan-Americas telecoms company reported that fixed voice revenues declined 4.3% as revenue reductions in Mexico, Central America and the Caribbean more than offset the 3.7% rise observed in South America. However, América Móvil's revenues in the U.S. rose 43.3% year-on-year to 868 million US dollars.

América Móvil said that it added nearly 6 million wireless subscribers and 1.5 million fixed line "revenue generating units" in the first quarter. At the end of March, the company had "231 million wireless subscribers, 13.6 million broadband accesses, 28.7 million landlines and 10.8 million PayTV clients, for a total of 284 million accesses, 12.1% more than a year before." source: América Móvil statement
No comments: 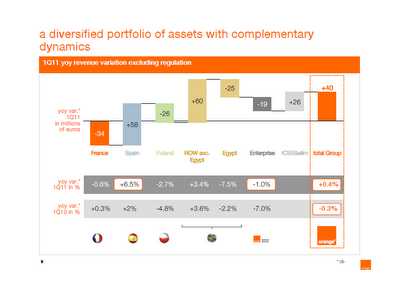 France Telecom said its revenues fell 1.4% year-on-year on a comparable basis to 11.23 billion euros in the first quarter of 2011. Excluding the impact of regulatory measures, the Paris-based company said its revenues would have climbed 0.4%, as its total group customers rose 7% to 215.9 million.

The company's mobile revenues increased 5.9% in France, 7% in Spain, 4.5% in Poland and 5.8% in Africa and the Middle East, excluding Egypt. France Telecom said its capex was equal to 9.6% of revenues, representing 1.08 billion euros in investments, in the first quarter, "in line with the target capex rate of about 13% for the year." source: France Telecom statement
No comments: