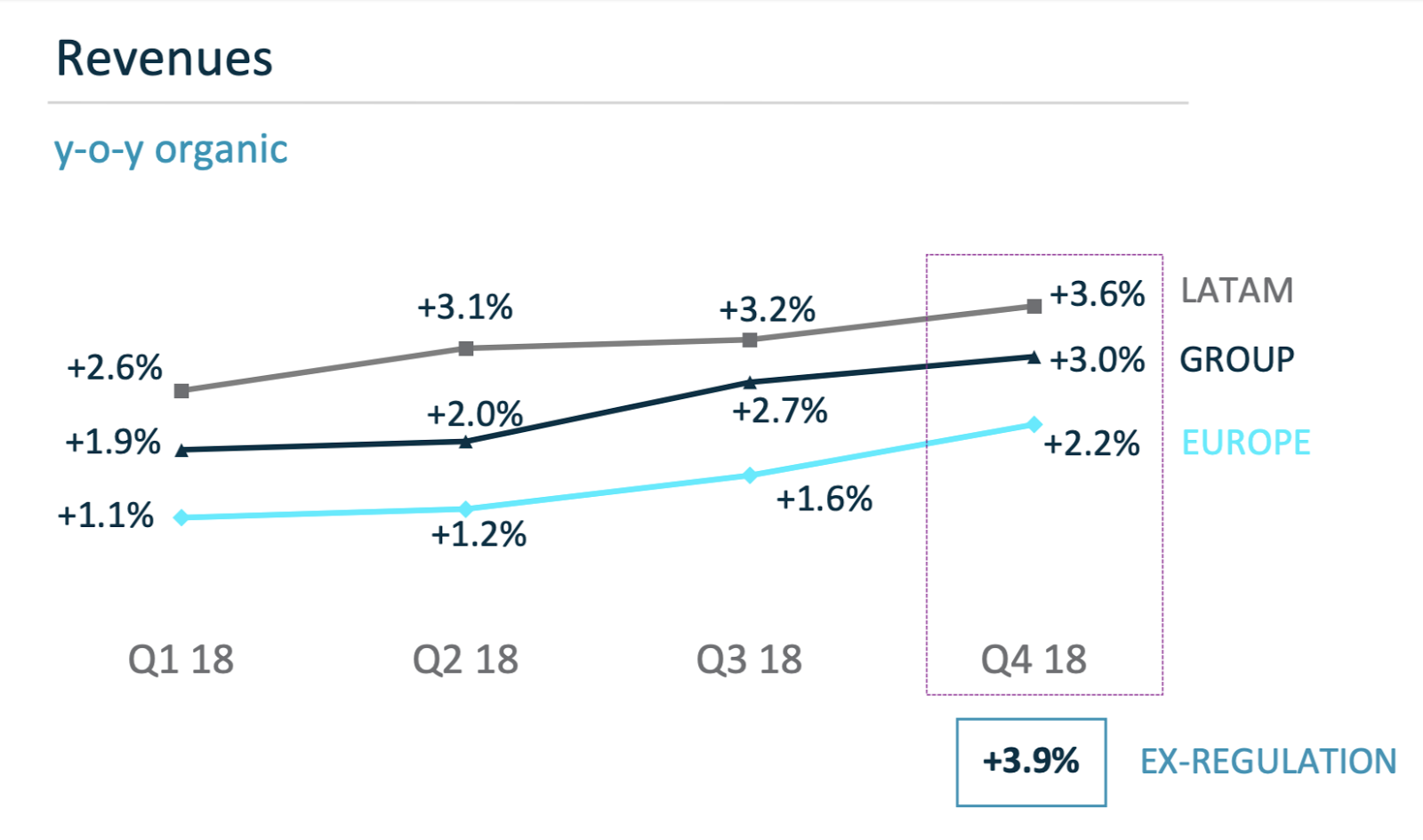 José María Álvarez-Pallete, CEO, said: " In 2018, we regained customer relevance, resulting in the best-ever figure of customer satisfaction. We continued increasing the weight of high-growing revenues (broadband connectivity and services beyond connectivity) and investing in state-of-the-art technology networks. ...This performance, together with the remarkable operating momentum in the initial months of 2019, allow us to announce with confidence our 2019 targets of continue growing in revenues and OIBDA, as we keep the capex/sales ratio stable.” 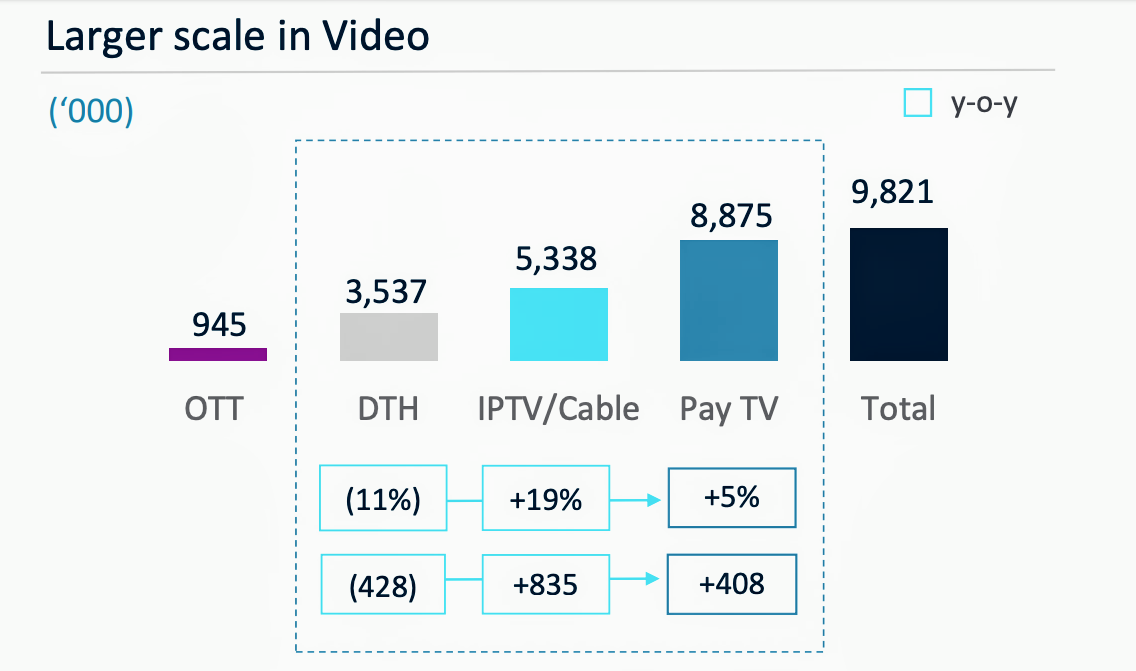 Deutsche Telekom reported a 3.1% year-on-year rise in revenues on an organic basis to 75.7 billion euros for 2018. It expects a "slight increase" in group revenues in 2019, followed by an "increase" in 2020. Once again, T-Mobile US is the primary growth engine. In 2018, T-Mobile US saw its revenues grow 6.8% to 43.1 billion U.S. dollars. source: Deutsche Telekom statement
No comments: 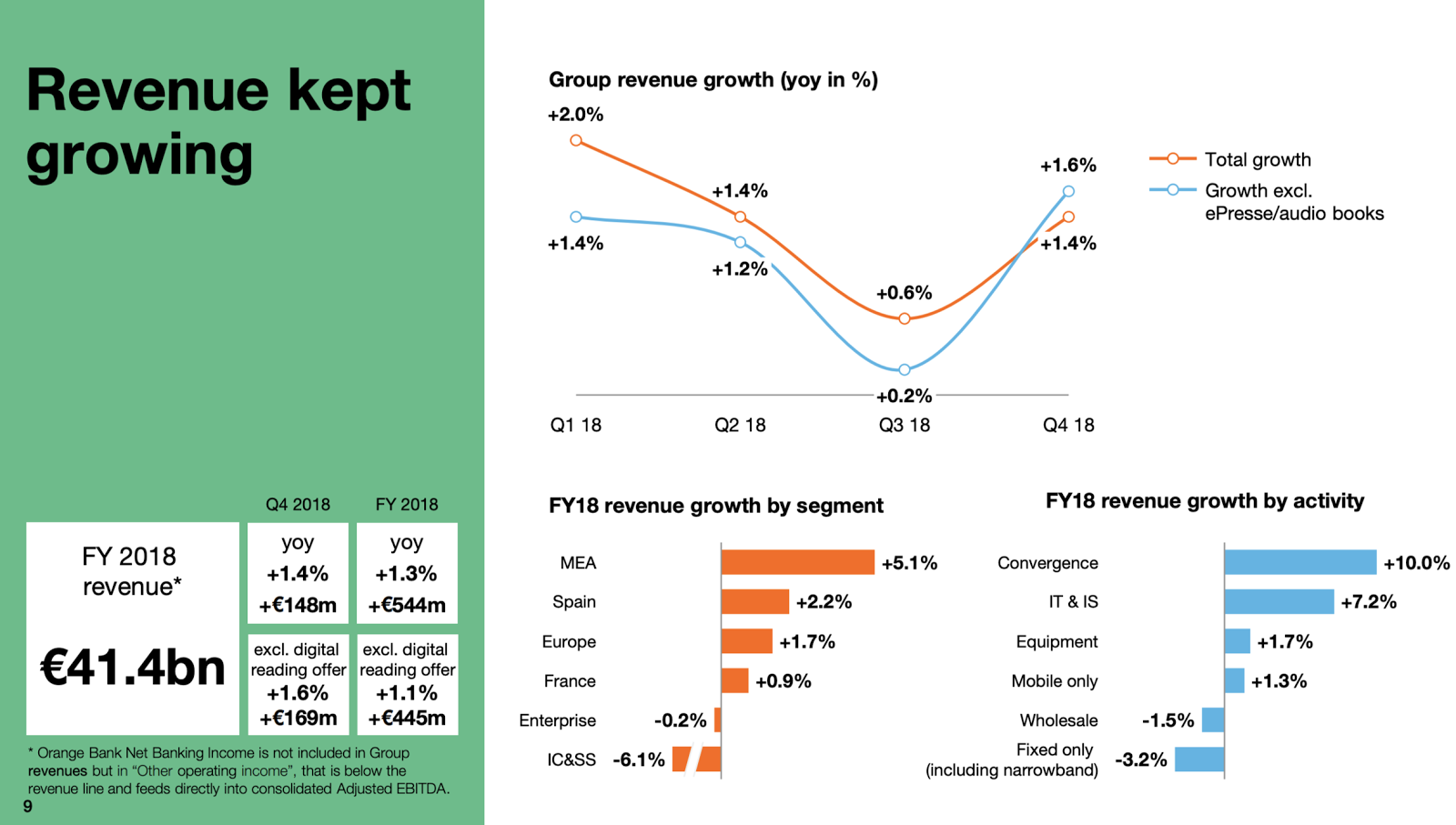 Orange reported a 1.4% year-on-year increase in revenues on a comparable basis for the fourth quarter of 2018 to 10.81 billion euros, up from 0.6% in the third quarter.

Orange CEO, Stéphane Richard, said: "Our leadership in terms of connectivity is the foundation of our well-established multi-service strategy. In terms of content, we celebrated 10 years of OCS (Orange Cinéma Séries) which now has nearly 3 million clients. In financial services, Orange Bank has attracted nearly 250,000 clients in France and Orange Money continued its strong growth to reach 14 million active clients." source: Orange statement
No comments:

América Móvil reported a 3% year-on-year increase in service revenues for the fourth quarter of 2016, at constant exchange rates.  That was approximately the same rate of growth as in the prior quarter, as the acceleration of service-revenue growth in Colombia, the U.S. and Argentina was offset by a slight deceleration in Brazil and Mexico "stemming from aggressive holiday promotions that included large allotments of data and airtime." Total revenues for the quarter were 262 billion Mexican pesos (13.52 billion US dollars).

Alphabet reported 23% year-on-year growth in revenues at constant currency to 39.3 billion US dollars for the fourth quarter of 2018, boosted by "ongoing strength in mobile search with important contributions from YouTube, cloud and desktop search."

"YouTube Music and YouTube Premium are now available in nearly 30 countries up from five countries at the start of 2018," said Sundar Pichai, Alphabet CEO. "Last month, YouTube TV announced that it has expanded nationwide to cover 98% of U.S households with the rest to follow shortly. YouTube continues to invest in its thriving community of creators and build great features for its nearly 2 billion monthly log in users....The number of YouTube channels with more than 1 million subscribers nearly doubled in the last year, and the number of creators earning five or six figures grew by more than 40% year-over-year." Source: Alphabet statements
No comments:

Excluding the impact of an accounting change, AT&T said revenues rose 17.2% year-on-year to 48.9 billion US dollars in the fourth quarter, primarily due to the Time Warner acquisition. Declines in legacy wireline services, wireless equipment, domestic video and Vrio were more than offset by WarnerMedia and growth in domestic wireless services and Xandr, AT&T said. Xandr, the advertising business, reported a 49% increase in revenues (26% excluding the AppNexus acquisition).

On a conference call with analysts, Randall Stephenson, CEO of AT&T, said: "Over a three-to-five year time horizon, unequivocally 5G will serve as a broadband, a fixed broadband replacement product... as we look at 5G, will you have enough capacity to have a good broadband product that serves as a streaming service for all of your DIRECTV NOW, your Netflix, etc.? I absolutely am convinced that we will have that capacity, particularly as we turn up millimetre wave spectrum. That's where the capacity and the performance comes from and that's where you'll begin to see a broad - a true replacement opportunity for fixed line broadband." Source: AT&T statement
No comments:

Amazon said it expects net sales to be between 56 billion and 60 billion US dollars in the current quarter, which would represent year-on-year growth of between 10% and 18%. This guidance anticipates an unfavourable impact of approximately 210 basis points from foreign exchange rates.

In the fourth quarter of 2018, Amazon increased sales by 20% to 72.4 billion dollars. Excluding the impact of currency movements, sales would have risen 21%.  Amazon said tens of millions of customers worldwide started Prime free trials or began paid memberships during the holiday season.

“The number of research scientists working on Alexa has more than doubled in the past year, and the results of the team’s hard work are clear," added Jeff Bezos, Amazon  CEO. "In 2018, we improved Alexa’s ability to understand requests and answer questions by more than 20% through advances in machine learning, we added billions of facts making Alexa more knowledgeable than ever, developers doubled the number of Alexa skills to over 80,000, and customers spoke to Alexa tens of billions more times in 2018 compared  to 2017.” Source: Amazon statement
No comments: