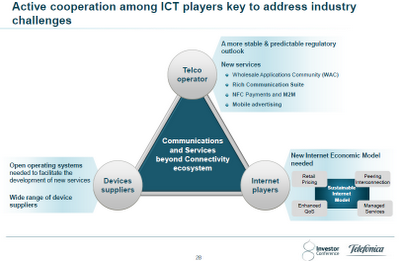 Telefonica said that it expects access and voice revenues to account for 64% of its total revenues in 2013 compared with 75% in 2010. The Madrid-based telco expects broadband to expand to 25% of its revenues (from 18% in 2010) and "services beyond connectivity" to climb to 9% (5% in 2010) in the same period. However, César Alierta Izuel, chairman and CEO of Telefónica, said that telcos will need to work with device suppliers and Internet players to overcome the challenges facing the ICT industry.

Between 2010 and 2013, Telefonica, which has operations in Europe and Latin America, forecasts that the compound annual growth rate of its revenues will be between 1% and 4%. It plans to spend less than 27 billion euros on capex across 2011, 2012 and 2013. source: Telefonica presentation