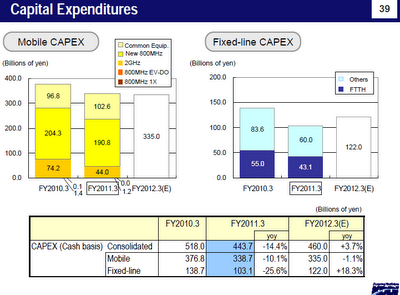 KDDI, Japan's second largest telecoms company, forecast that its revenues will grow 0.7% in the financial year ending March 31, 2012 to 3.46 trillion Japanese yen (42.41 billion US dollars) after a fall of 0.2% the previous year.  KDDI expects smartphones to account for 33% of all handsets its sells in the year to March 31 compared with just 9% the previous year. The company said that the data ARPU of customers who change to a smartphone rises by approximately 1600 yen.

KDDI also forecast that its capital spending will be 460 billion yen, including 20 billion yen related to repairs following the earthquake in east Japan, in the current financial year. That would amount to an increase in capex of 3.7% on the previous year. source: KDDI presentation