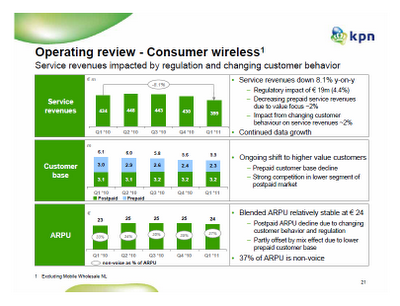 KPN said that its revenues in the first quarter of 2011 fell 1.3% year-on-year to 3.24 billion euros, partly because of lower-than-expected revenues in its home market of The Netherlands.

KPN said that increasing usage of new apps is resulting in accelerated substitution of SMS and voice by data and that its current tariff bundles are "not positioned to fully monetize data usage growth." KPN said it is seeing significantly less SMS usage and decreased outside bundle calling in the Netherlands. source: KPN presentation