This post is sponsored by the Enterprise Mobile Hub and BlackBerry.
The proliferation of communications apps is creating cliques and confusion
Don’t call me, I’ll [something] you: Among twentysomethings, the communications hierarchy is roughly this – Facebook first, text second, email third and only call as a last resort. That is, of course, a gross over-simplification – members of Generation Y actually use many alternatives to Facebook, SMS, email and old-fashioned voice calls.
In fact, the rise of the smartphone has been accompanied by an explosion in IP-based communications and messaging apps, such as BlackBerry Messenger, FaceTime, iMessage, TextMe, TextNow/Touch, Twitter, Viber and WhatsApp. These mobile pretenders are slugging it out with longer-standing communications apps, such as Facebook, Google Talk (now merging into Google+), Skype and Yahoo! Messenger, as well as conventional circuit-switched phone calls and SMS.
For CIOs, the recent proliferation of communications options is a double-edged sword.  IP-based apps should cut telecoms costs, but they can also create communications silos (read cliques) within an organisation. Although some of these services are interoperable in some scenarios, in many cases, they can’t communicate directly with each other, often defaulting to email to alert a user to an incoming message. While some employees might be WhatsApp devotees, others might prefer Skype or direct Twitter messages.
So, should a CIO and his or her team intervene and mandate the use of specific communications services or should they let the market run its course? Anyone contemplating the latter approach, may have to be patient. A quick review of how these various communications services are doing suggests the market will be fragmented for several years yet.
Of course, the list above is far from exhaustive – there are many more social networking/messaging/voice calls apps out there (see graphic showing the top social networking apps in the App Store on October 29th). Even some mobile operators, such as Telefonica, are launching their own so-called over-the-top apps, such as TUMe. There are also social networking services, such as Yammer, that are designed specifically to be used within enterprises. Some people rely almost exclusively on email! 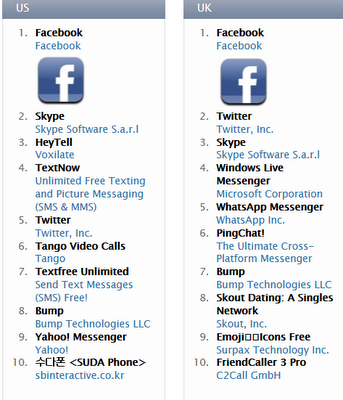 For CIOs, this all may look like communications chaos, but it is clearly far too early to bet on which services are going to win out.  Although it is tempting to break down the cliques and force employees to use specific apps, such as Yammer or Skype, to contact colleagues, that probably isn’t practical in a bring-your-own-device (BYOD) culture for several reasons:
But the cliques won't last forever. In time, the weaker services will be weeded out and people will surely gravitate towards a handful of communications platforms – a survival of the fittest.
CIOs need to let evolution run its course.
This post is sponsored by the Enterprise Mobile Hub and BlackBerry.