Telefónica reported year-on-year organic growth of 4.4% in its revenues in the second quarter of 2015 to 11.88 billion euros, compared with 3.3% in the first quarter. The group's top line was boosted by 10% revenue growth in T. Hispanoamérica (Spanish speaking Latin America) and 5% in Brazil

The Madrid-based telco said that a rise in the number of customers paying for additional data beyond their tariff plan had contributed one percentage point to organic growth in the quarter. It added that 30% of its customers are using up their bundle of data, of which more than 40% pay for additional data.

César Alierta, Executive Chairman, said: "Particularly noteworthy, for example, is the significant year-on-year growth of 66% in video traffic, 52% in mobile data traffic and the 60% higher data usage of an LTE customer vs. a 3G customer. The strength of the evolution of the business in the first half of the year, coupled with our positioning in order to capture growth opportunities in the coming quarters, have led us to revise our objectives upwards for 2015.” source: Telefónica statement 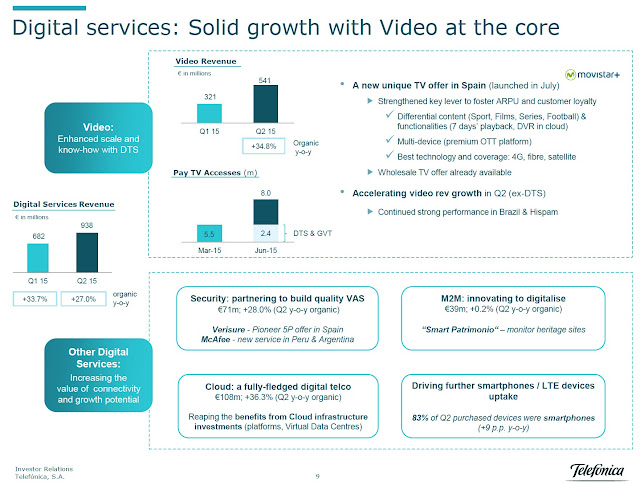