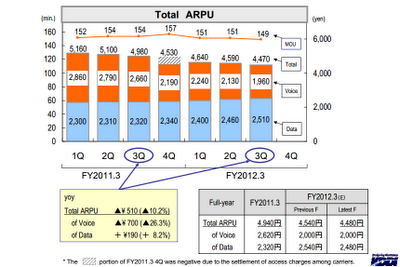 KDDI, one of Japan's largest telcos, said its operating revenues rose 5.7% year-on-year to 902.12 billion Japanese yen (11.34 billion US dollars) in the quarter ending December 31, 2011.  KDDI said the increase was due in part to rising sales of smartphones - the operator sold 1.63 million smartphones in the quarter compared with 390,000 in the same quarter a year earlier.

KDDI also said that its mobile data ARPU rose 8.2% year-on-year to 2,510 yen in the quarter, but voice ARPU fell 26% to 1,960 yen. The operator plans to spend 450 billion yen on capex in the year ending March 31, up marginally from the year before. source: KDDI presentation