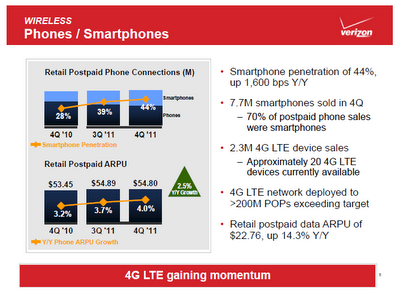 Verizon Communications, one of the leading telcos in the U.S., said its revenues rose 7.7% year-on-year in the fourth quarter of 2011 to 28.4 billion US dollars, driven by 19.2% growth in wireless data service revenues and 18.2% growth in revenue from fibre services. Verizon said that 44% of its customers now have smartphones, up 16 percentage points year-on-year. It added that it has now sold 2.3 million LTE devices.

The New York-based company said that its capital spending in the fourth quarter was down 21.6% year-on-year to 3.7 billion dollars.Verizon said it is seeking to "accelerate momentum in 2012." source: Verizon presentation