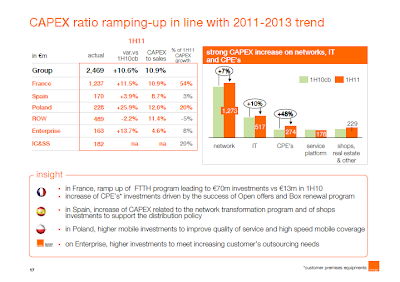 Dragged down by regulation, France Telecom said that its revenue fell 1.3% year-on-year, on a comparable basis, in the second quarter to 11.34 billion euros. Revenues were down 2.2% in France, but climbed 4.2% in Spain, driven by a rise in the company's mobile customer base and demand for broadband.

France Telecom said that its capital spending in the first half of 2011 was almost 11% higher than in the same period of 2010, as it seeks to improve its networks. source: France Telecom presentation