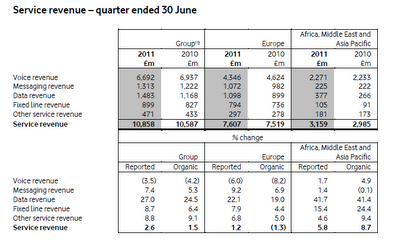 Vodafone said that its group revenues rose 2.3% year-on-year on an organic basis to 11.66 billion British pounds (18.91 billion US dollars) in the quarter ending June 30th, boosted by a 24.5% rise in group data revenue.

However, the U.K.-based group said its service revenue in Europe declined by 1.3% on an organic basis, hit by cuts in regulated mobile termination rates and "macroeconomic challenges in southern Europe. Vodafone said its unit in Spain saw organic service revenue decline by 9.9%, "with price reductions adding to ongoing macroeconomic pressures."