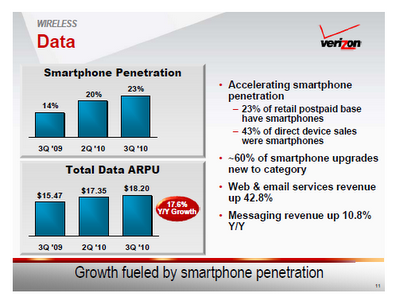 Verizon Communications said that its consolidated revenue, on a like-for-like basis, rose 2.1% year-on-year in the third quarter to 26.5 billion US dollars, fuelled by a 7.7% increase in wireless service revenues and a 29.3% increase in revenues from its fibre-to-the-premises services.

Wireless data revenues were up 26.3% year-on-year, as smartphone penetration among Verizon Wireless' postpad customers climbed to 23% from 14% in the third quarter of 2009.

Verion said that  its capital expenditures totaled 11.8 billion dollars through the first three quarters of 2010, down 4.9% year-on-year. Verizon expects that total capital spending for 2010 will be at the low end of, or slightly below, the company's targeted range of 16.8 billion to 17.2 billion dollars. source: Verizon statement