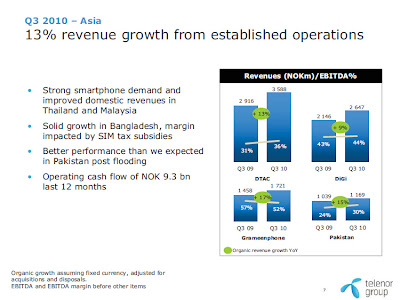 Telenor said its revenues grew 6% year-on-year, on an organic basis, to 24.1 billion Norwegian krone (4.12 billion US dollars) in the third quarter of 2010, fuelled by strong growth in Asia, which more than offset declines in the Nordic region and eastern Europe.

Improving its outlook for the full year, Telenor forecast that its revenues will grow 5% on an organic basis across 2010 and capex will come in at 12% of sales. source: Telenor presentation