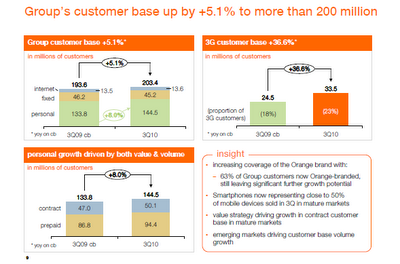 France Telecom said that its revenues fell 0.6% year-on-year on a comparable basis to 11.63 billion euros in the third quarter. The Paris-based company said that, excluding the impact of regulatory measures (-198 million euros), third quarter revenues rose 1.1% year-on-year, after rising 0.3% in the second quarter and falling 0.3% in the first quarter.

France Telecom expects its revenues, excluding the impact of regulation (estimated at less than one billion euros), to grow slightly in 2010. It also forecast that capex will remain at about 12% of revenues for the full year of 2010. source: France Telecom statement