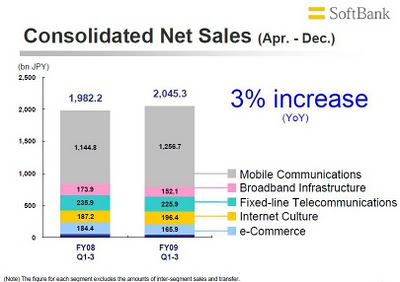 SoftBank said its sales rose almost 7% year-on-year in the quarter ending December 31, 2009 to 686 billion yen (7.59 billion US dollars) boosted by an increase in its mobile subscribers and its customers' increased use of mobile data services. SoftBank said that the iPhone, which it sells exclusively in Japan, was the best selling handset on the market in 2009.  source: SoftBank statement