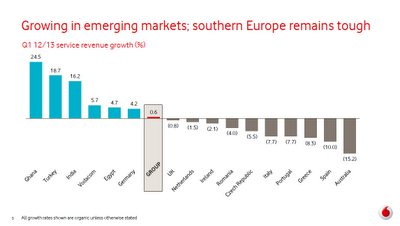 Vodafone said that its service revenue rose 0.6% year-on-year to 10 billion British pounds (12.8 billion euros) in the quarter ending June 30th, on an organic basis. A 17.1% growth in data revenues was offset by declining voice revenues, partly caused by cuts in regulated mobile termination rates. Messaging revenue fell by 1.2% after growing 2.4% in the previous quarter.

Vodafone's revenues grew rapidly in Ghana, Turkey and India, but declined sharply in Australia and southern Europe.  The company noted: "On a regional basis we continue to benefit from a
relatively stable macroeconomic environment in northern Europe, but macroeconomic and competitive pressures in southern Europe have intensified further." source: Vodafone statement and presentation