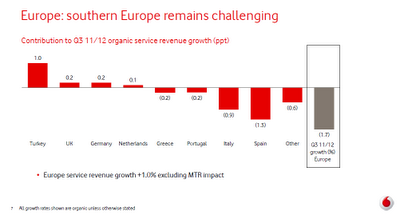 Vodafone said its group service revenue grew 0.9% year-on-year on an organic basis in the quarter ending December 31 to 10.6 billion British pounds (16.8 billion US dollars). The equivalent figure for the previous quarter was 1.3%. The U.K.-based multinational said its service revenue would have grown 3.1% if it wasn't for mandated reductions in regulated mobile termination rates. India, where service revenues grew 20%, was the group's main growth engine.

Service revenue in Europe declined 1.7% to 7.4 billion pounds on an organic basis, while revenue in Africa, Middle East and Asia-Pacific climbed 7.6% to 3.2 billion pounds. Group voice revenue was down 4.7%, but messaging revenue climbed 4.3% and data revenue 21.8%. source: Vodafone presentation