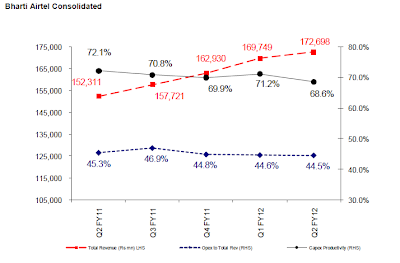 Bharti Airtel, with operations spanning 19 countries in Africa and South Asia, said that its revenues rose 13% year-on-year in the quarter ending September 30th to 172.7 billion Indian rupees (3.52 billion US dollars). The group's customer base climbed 22% to almost 237 million.

After expanding its African networks, Bharti said it now has 135,813 network sites compared with 123,869 a year earlier. Capital spending was up 43% year-on-year to 47.29 billion rupees in the quarter. In Africa, where it added 925 new base stations in the quarter, capital spending rose 586% to 575 million dollars. source: Bharti statement