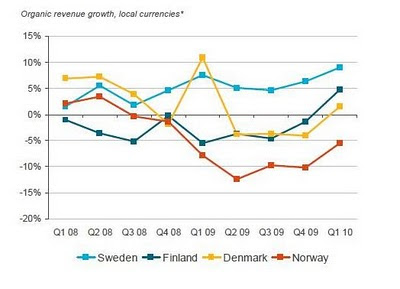 TeliaSonera said its net sales increased 2.5% year-on-year in local currencies to 29.09 billion Swedish krona (4.07 billion US dollars) in the first quarter, boosted by a 9% increase in mobile revenues in Sweden. The group, which has operations in Europe and Asia, also reported that mobile broadband subscriptions increased 60% year-on-year, while data traffic doubled.

TeliaSonera said it still expects its net sales in 2010 to be "somewhat higher compared to 2009". It also forecast that its capex-to-sales ratio will be somewhat below 15% in 2010 compared with 12.8% in 2009. source: TeliaSonera presentation