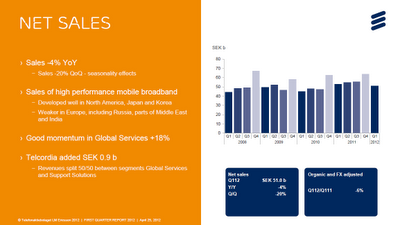 Ericsson, the leading supplier of mobile networks, said that its sales declined 6% year-on-year on a comparable basis in the first quarter of 2012 to 51 billion Swedish krona (7.59 billion US dollars). The Stockholm-based company said sales in its networks division fell 18% on a comparable basis as a result of "cautious operator spending in regions with macro-economic or political uncertainty. ...Sales in CDMA continued to decline and decreased -40% YoY. [But] demand for HSPA and LTE was good in the quarter, following the increased focus on network performance, especially in North America."

By contrast, sales in its global services division rose 14% year-on-year on a comparable basis. Ericsson said that global mobile subscriptions reached 6.2 billion at the end of the quarter, including 1.1 billion mobile broadband subscriptions. source: Ericsson statement