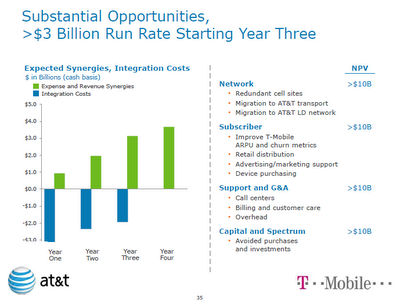 AT&T, the U.S.'s largest telecoms company, said it has agreed to buy T-Mobile USA from Deutsche Telekom for 39 billion US dollars (made up of a cash payment of 25 billion dollars and the balance in AT&T shares).  Justifying the transaction, AT&T said its mobile data traffic grew 8,000% over the past four years and by 2015 it is expected to be eight to 10 times what it was in 2010.

AT&T said the transaction will enable an additional 46.5 million Americans to have access to LTE services. "In terms of area covered, the transaction enables 4G LTE deployment to an additional 1.2 million square miles, equivalent to 4.5 times the size of the state of Texas," it added. The Dallas-based telecoms company said the acquisition will increase AT&T’s infrastructure investment in the U.S. by more than 8 billion dollars over seven years.

Three years after closing, the deal will generate 3 billion dollars a year in synergies, according to AT&T, claiming that "revenue synergies will come from opportunities to increase smartphone penetration and data average revenue per user, with cost savings coming from network efficiencies, subscriber and support savings, reduced churn and avoided capital and spectrum expenditures." source: AT&T statement