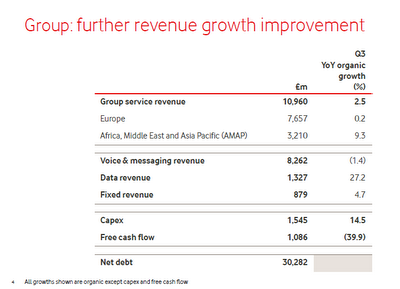 Vodafone Group, one of the world's largest mobile operators, said its service revenues grew 2.5% year-on-year on an organic basic to 10.96 billion British pounds (17.68 billion US dollars) in the quarter ending December 31. The growth was fuelled by a 27% increase in data revenue and a 9.3% rise in service revenues in developing countries. Vodafone said that service revenues grew 4.6% in its South Africa-based Vodacom subsidiary and 16.7% in its Indian unit

Vodafone said that group revenue would have grown 4.6% year-on-year, without downward changes in regulated mobile termination rates. The UK-based operator added that 17% of its customers in Europe (including Turkey) now have smartphones. source: Vodafone presentation