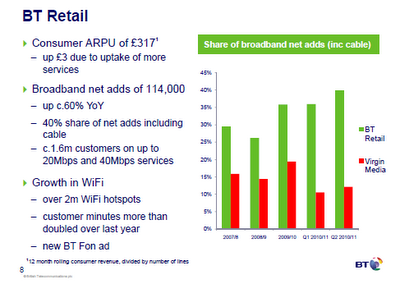 London-based telco BT said that its underlying revenue fell 3% year-on-year in the quarter ending September 30 to 4.98 billion pounds (8.04 billion US dollars), as revenue in its Global Services division declined 2% and revenue in its retail division fell 4%, dragged down by a 6% slump in consumer revenues. Revenues in BT's wholesale divison were down 5%, partly because of a regulatory charge.

BT said that its fibre network now passes three million premises and it is getting 4,000 orders a week for its fibre-based broadband service, BT Infinity, to which it has now connected 38,000 customers. BT also claimed half a million customers for its BT Vision, television service. source: BT presentation